I’ve never been so excited to change my bedding. 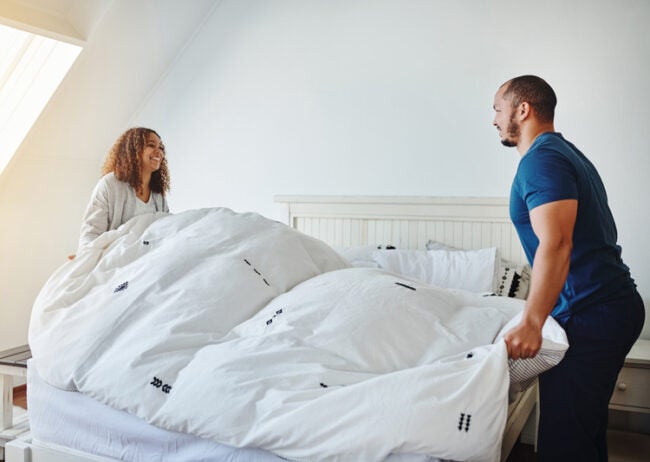 The other day my friend told me she had given up on duvets. Tired of the painstaking process of wrestling the comforter into the duvet cover, finding the ties, and buttoning it up, she made the switch to quilts. I, on the other hand, am not a quilt person. I love the fluffy cloud formed by a fabric-encased down comforter, whether it exudes the relaxed aesthetic of linen or the crisp look of cotton. But changing the duvet cover has always come with drama—until now.

Before, when it was time to change the bed linens, I typically found myself in a tussle with my boyfriend over whether the duvet cover really needed to be washed. Then, after I won the argument, the two of us would struggle to get the dang comforter into the clean cover. With this new TikTok hack, we’re finally both happy to be duvet people.

RELATED: The Best Duvet Inserts for Your Bedding

Honestly, not all hacks prove to be that simple. But when TikTok user shadyysandyy shared her method for putting a comforter inside a duvet cover, I was impressed with how fuss-free and totally achievable the hack seemed. I remember seeing this method on an episode of “Rachael Ray” years ago, and The Home Depot also has a tutorial, but the viral TikTok video (no longer available) made it look even simpler. Now that I’ve tried it out for myself, I can tell you it’s a game changer.

Here are the easy steps to follow to get a comforter perfectly snug inside a duvet cover. These instructions should be enough, but actually watching the clip will make all the difference.

Step 1: Lay the duvet cover on top of your bed, inside out.
Step 2: Lay the comforter on top of the inside-out cover.
Step 3: Starting from the closed end of the duvet cover, roll the cover and comforter up together until you reach the other end of the bed. You’ll have a sausage-like roll.
Step 4: Grab either end of the “sausage” and, holding the comforter and the side of the cover closest to it, flip the other side of the cover outward and around the sausage; the cover will now be right-side out around the “sausage.” Do up the buttons.
Step 5: Unroll the “sausage” and voilà—your comforter will be perfectly positioned inside the cover.

RELATED: Solved! How Often You Should Actually Be Washing Your Sheets

The Video Received More Than 5,000 Comments

“I just did this and it worked so well!! You’re a saint,” said one TikTok user. “Genius!! Thanks so much. Works perfectly every time,” said another. Others, amazed by how easy the hack was, called it “witchcraft” and “sorcery.” And a few joked that they really needed this hack, because they’ve gotten into major fights with their spouses while replacing the duvet cover, or somehow ended up inside the cover while trying to change it. Try it yourself and see what you think!

13 Products Every Dog Owner Needs, According to Our Editors

How to Clean an Air Fryer

IKEA Headboard Gets a DIY Makeover