All You Need to Know About Tudor Style Homes, Then and Now

Find out what makes stately, spacious Tudor homes so desirable, and what it takes to restore one to its original glory. 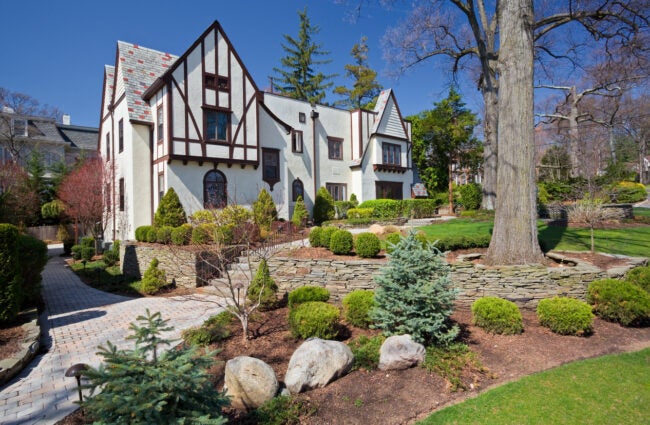 If you’ve lived in or near a suburb, you’ve probably seen your fair share of Tudor-style homes, typified by stucco or brick exteriors, half-timbering accents, and steep roof gables. The Tudor-style house has a rich history dating back centuries, originating in England before reclaiming its crown in America.

Tudor architecture arose in England in the late 15th century and remained prominent until the mid-16th century. The familiar brown-and-white exterior of the modern Tudor house captures the look of post-Medieval English village homes, which were commonly built with a combination of white plaster-like daub and tar-sealed timbers, also known as half-timbering.

An English Tudor house could also feature a thatched roof, tall multi-paned windows, slender columns, towering spires, and tall stone chimneys. Over time, some well-to-do commoners even opted for brick or stone between timbers, but the original Tudor style was already beginning to fade in England by the start of the Elizabethan era.

Tudor house plans of this period commonly included many of these design elements:

American Tudor houses reached their peak popularity in the 1920s, with famous examples built during this prosperous time including the Ford House in Grosse Pointe Shores, Michigan, the Getty House in Los Angeles, California, and the Joe M. Beutell House in Thomasville, Georgia. However, expensive Tudor-style home construction declined as the Great Depression swept the nation. By the 1940s, the Tudor Revival was largely over, falling out of favor as more modest homes that were cheaper to build proliferated.

Today, Tudor-style houses are once again a popular architectural choice, and many restored Tudors sell for over $1 million, depending on location. Some Tudor houses in greater need of TLC can be bought at more affordable prices, but renovating and maintaining this unique style of home will be cost-prohibitive for many. Before you decide to take on a Tudor renovation, understand the expenses that might be looming on the horizon.

If you long for the Tudor look but aren’t ready to tackle a fixer-upper money pit or buy a fully restored home, consider incorporating these elements of Tudor house style into a newly constructed home:

With additional reporting from Jennifer Stahlkrantz and Phillip Tinner.

Mobile Homes: Then and Now
Advertisement

Killing Them Softly: 5 (Safer) Ways to Win the War on Weeds