Solved! What Does Flood Insurance Cover?

It's important for homeowners to know what is—and what is not—covered by their flood insurance policy so they can be prepared if disaster strikes. 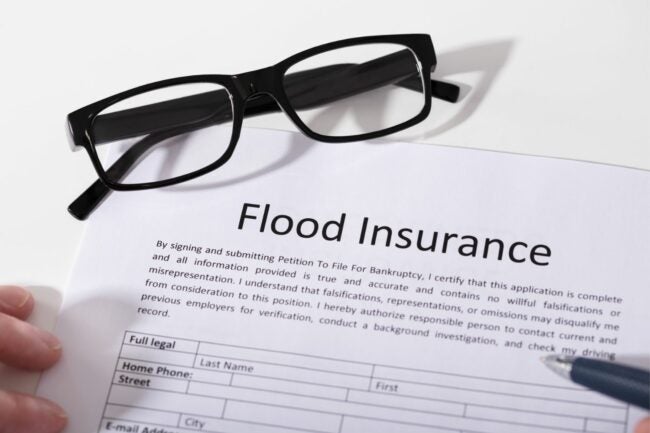 Q: My home loan lender has told me that I will need to buy and carry flood insurance because my home is in a high-risk area. I thought I’d only need homeowners insurance! Why do I need this extra policy (and the extra cost that it creates), and what does flood insurance cover?

Homeowners insurance covers damage to a home resulting from accidents, fire, vandalism, or weather—with the notable exceptions of floods and earthquakes. Why? Both of these types of incidents are generally limited to specific geographic areas, and both cause damage at a financial scale that makes the costs significant: A single inch of water in a home can cause as much as $25,000 worth of damage. Even a home outfitted with a quality sump pump and one of the best home generators to keep it going through power loss can’t handle extreme flooding. Rather than including the coverage in standard homeowners policies and spreading the costs across all insured homeowners (even those who are extremely unlikely to experience such damage) homeowners insurance companies instead opted to exclude those events from coverage. Some insurance companies opted to create separate flood or earthquake policies for purchase as additional coverage for their customers, while others simply choose not to involve themselves in flood or earthquake coverage.

Recognizing that homeowners insurance policies and their exclusion of flood damage coverage was leaving many homeowners without recourse after a flood, the Federal Emergency Management Agency (FEMA) developed its own flood insurance program called the National Flood Insurance Program, or NFIP. The NFIP provides coverage directly from the program and through partner insurance companies and is available for purchase to all property owners, renters, and businesses in NFIP-designated areas.

The NFIP divides coverage into two areas of coverage. Building coverage focuses on rehabilitating the structure of the home or business, and contents coverage aims at replacing damaged possessions. These definitions are pretty broad. Building coverage will help pay to repair or replace the base structure (less the deductible), including foundation walls, anchor systems, and permanently installed fixtures such as cabinets, wallboard and paneling, bookcases, and carpeting. It also covers whole-home systems such as electrical and plumbing, furnaces and water heaters, solar equipment, and fuel and well tanks. Installed appliances such as refrigerators, stoves, and dishwashers are also included. This coverage will pay for the restoration of the permanent structure of a home and attached or detached garage. Sometimes the policy will include the cost of debris removal, which can be significant, so homeowners will want to check to see if it’s covered. Contents coverage will pay for the replacement of personal belongings and parts of the home that are more frequently swapped out, including clothing, furniture, original artwork and other valuables, curtains and carpeting that isn’t permanently installed, portable appliances such as window air conditioning units, microwaves, and electronics, and washers and dryers. To protect their home completely, homeowners will need both types of coverage in their package, and they’ll want to check coverage limits and costs based on how much they’re insuring.

NFIP plans can cover different categories for different needs. Homeowners will want to choose both building and contents coverage. Renters, on the other hand, will only require contents coverage, as the structure of the building is not their responsibility. What does commercial flood insurance cover? As with residential coverage, it depends on what the business owner chooses; property owners may select building coverage only and require tenants to carry their own contents policy, while a business owner with an office may choose both building and contents coverage.

NFIP coverage is dependent on the cause of the flood.

Not all floods are created equal. While most people think of flooding as any water that makes it into the home uninvited, the NFIP has a much more specific definition: Flooding is an unexpected amount of water on land that is normally dry that covers 2 or more acres of land and two or more properties. What does national flood insurance cover in this case? Any damage sustained in a large regional flood—even if that “region” is the two homes at the end of the street—will be a covered event and will activate the homeowner’s coverage. If, on the other hand, a homeowner has drainage problems on their land that result in a good-size puddle every time it rains, and then a hard rain turns the puddle into a pond that floods the basement, the homeowner may not be covered by flood insurance. Sewer backups also fall into this exception: If a sewer backup is caused by widespread flooding in the area that meets the size requirements of the policy, it will be covered. If the sewer simply backs up because of a blockage in the line, the inches of sewer water in the basement will not be covered by the homeowner’s flood insurance—it may be covered by their homeowners insurance if that policy has a sewer backup endorsement, but otherwise the homeowner will be out of luck.

Flood insurance does not cover some kinds of damage, such as some mold and mildew growth, outdoor structures, and more.

The NFIP has some restrictions on what it will cover, even within a covered event. The goal of this insurance is to restore the home to a livable condition in the face of an unavoidable catastrophe, but that doesn’t mean the residents of the home have no responsibilities. First, homeowners will want to make sure that money, precious metals, and papers such as savings bonds and stock certificates are stored in watertight containers or in a safe deposit box, because flood insurance will not cover those. While mold and mildew that builds during the time the home is flooded and can’t be dried out will likely be covered, NFIP policies stipulate that they will not cover mold or mildew growth that “could have been avoided by the homeowner.” This means that if a homeowner waits too long to get down to the business of drying out their home, or they don’t take the necessary steps to prevent the water buildup in the first place, then mildew and mold abatement may be a separate expense they’ll have to pay out of pocket.

A little more complicated is the coverage of lower-level rooms. What does flood insurance cover in the basement? Basements are practically designed to flood—so much so that residents of high-risk areas can often get a discount on flood insurance rates by filling in the basement. As that’s not a viable option for everyone, homeowners will want to take steps to protect items in the basement. The furnace and washer and dryer will likely be covered under building and contents coverage, but most personal effects won’t be covered at all if they’re stored in the basement. Elevating the furnace and appliances a few inches can go a long way toward avoiding damage in case of smaller flooding, and personal items stored in the basement will need to be elevated and/or stored in waterproof bins to protect them.

What flood insurance will not cover includes items located outside of the home. Decks, patios, and landscaping, along with wells, septic systems, and pools, won’t be covered—they’re expensive to lose, but not considered part of the structure of the home. A homeowner’s car and motorcycle are also not included in coverage, but it’s possible that their auto insurance policy may cover those items.

Finally, NFIP policies do not include coverage for a homeowner’s additional living expenses while their home is repaired. This can be a significant expense, so if the homeowner lives in an area where floods are likely, it’s a great idea to set some savings aside in case they need to be out of their home for a period of time.

NFIP coverage is available and generally affordable, but it has some limits, such as coverage limits that some feel are too restrictive ($250,000 for building coverage and $100,000 for contents coverage) and some limitations on what can be covered. The biggest benefit of NFIP coverage is that it can’t be canceled if a home is redesignated as a higher-risk area. To fill what some see as gaps in NFIP policies, private insurance companies have written their own policies and rules for flood insurance. What does it cover? Generally, private insurers offer higher coverage limits, so for larger or more expensive homes, private insurance may be a necessity in order to rebuild or replace the contents of the home. In addition, some private insurers do cover cost-of-living expenses if the homeowner needs to live somewhere else for the duration of the repairs after a covered event.

The biggest concern with private insurers is that unlike NFIP, the insurer is not required to continue selling a homeowner a policy. FEMA frequently redraws risk maps as the landscape and climates change, so if the home falls into a higher-risk area, the private insurer can cancel the homeowner’s policy. As nearly every flood insurance policy includes a 30-day waiting period before it takes effect (to discourage people from buying a policy only when a major flooding event threatens), a homeowner may find themselves without coverage when they need it most.

Getting flood insurance may be a good idea—and may even be required.

If the homeowner has a mortgage that is backed by the federal government (such as an FHA, VA, and USDA mortgages and mortgages purchased by some federal partners), they may be told that they live in a flood-prone area and are required to carry flood insurance. For renters, a landlord can make it a condition of the lease that the renter carries contents insurance to reduce their costs if there’s a flood. Even if a homeowner or renter is not required to carry flood insurance, they’ll want to investigate whether they should. FEMA’s floodplain maps and risk assessments change frequently, so homeowners can check its website to see where their home falls. Homeowners may be surprised to see that they don’t need to live particularly close to a large body of water to be in a high-risk flood zone; risk has to do with elevation, drainage, and what’s upstream from the small brook two streets away. If a home is located in a medium- to high-risk area, the homeowner will want to ask for a flood insurance quote from NFIP and a couple of private insurers. Flood insurance cost is relatively minimal compared to the damage flood waters can do in minutes, and as long as the homeowner reads their policy documents carefully and is aware of what is covered and for how much, it can be a very wise investment.

Solved! What Does Renters Insurance Not Cover?