Unwelcome guests are never fun, especially if they leave traces on your property. If you’re asking yourself, “What does raccoon poop look like?” follow the tips below to determine what you’re dealing with. 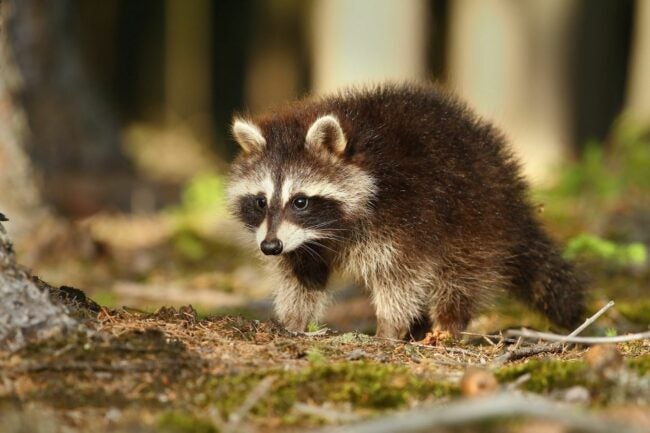 Q: I recently spotted feces in my yard that doesn’t look like it came from a dog or cat. I suspect that it’s raccoon feces, but what does raccoon poop look like?

A: Although similar in size and shape, raccoon poop can appear different in its contents than the droppings of household pets. What does raccoon poop look like? Well, it’s often dark, long, and tubular, similar to a dog or cat poop. However, raccoon droppings can also contain visible evidence of their diet and invisible pathogens that are dangerous to pets and humans. Determining whether you have raccoons visiting your property or just a stray neighborhood cat can make all the difference in deciding what precautions to take when determining how to stop raccoons from pooping in your yard.

Raccoon feces on your property?
A pro can help. Get free, no-commitment estimates from wildlife removal experts near you.
Find a Pro

Raccoon feces is 2 to 3 inches long, and it’s dark and tubular in shape.

When looking at raccoon poop images or directly at scat in your yard, raccoon poop may not look much different than the droppings of a small or medium-size dog. Their feces are usually about half an inch to an inch in diameter and tubular in shape, typically with a break in the middle. The feces are dark in color. The exterior of raccoon poop might look brittle, almost similar in texture to tree bark.

While you may not mind having a friendly outdoor cat visit your property, it’s unlikely that the poop you’re finding outdoors comes from a cat. Unlike dogs and raccoons, outdoor cats will bury their poop as a way to avoid unwanted attention from potential predators.

While an individual piece of raccoon poop is probably nothing to worry about, a pile of it can be cause for concern, according to Thomas Ward, training specialist and biologist at Critter Control. “Raccoons exhibit a behavior called ‘using a latrine,’” he explains. “They pick a spot that is the designated ‘bathroom,’ so you might start to notice a lot of droppings piling up in one area.” As raccoons are social animals and tend to stick together for security, these latrines will usually be quite large, especially if the raccoons have been in the area for a while. A raccoon latrine signals extensive raccoon presence and likely will require intervention if they’re encroaching on your property. An unpleasant odor will also accompany a raccoon latrine—even more reason why you’d want it off your property as soon as possible.

Raccoon latrines can appear in a variety of places. “I’ve seen droppings show up on roofs, and also in pools,” says Ward.

A noticeable difference between raccoon poop and dog poop is the evidence of undigested food. Whole berries or seeds are usually visible in raccoon feces, where other animals’ feces appear homogenous. This undigested food can contribute to raccoon scat’s pungent odor—it’s much stronger and more unpleasant than other animal droppings.

The only other animal droppings that may contain visible traces of food are from bears. However, as expected, bear scat piles are much larger in size and looser in form.

Think raccoons are making your property their home?
A pro can help. Get free, no-commitment estimates from wildlife removal experts near you.
Find a Pro

Raccoon feces can carry disease-causing pathogens that can be harmful to humans and other animals.

Raccoons aren’t just nuisance pests that eat your garbage—they can be a serious health concern. Raccoons can carry various bacteria, viruses, and parasites. Many of these agents are zoonotic, meaning they can be transferred from animals to humans. Diseases include rabies, leptospirosis, and toxoplasmosis. And like raccoons themselves, their feces can carry infectious disease-causing pathogens.

Because raccoon scat can carry these harmful viruses, bacteria, and parasites, it’s important to distinguish between their feces and the droppings of other animals by reviewing raccoon poop pictures. One common parasite found in raccoon poop is roundworm, also known as Baylisascaris procyonis. Roundworm and its eggs are too small to be spotted from a difference, and they can affect humans and pets—even if you’re diligent about giving your pet its flea, tick, and worm prevention. If the eggs of roundworms are ingested or inhaled, they hatch into larvae and move into different parts of the body, sometimes causing nausea, loss of coordination, liver enlargement, loss of muscle control, and blindness. Pets will require a round of dewormer medication (available from a veterinarian), and stool samples will be necessary to confirm the presence of the worms and to determine if they’ve been eradicated. Medications like mebendazole, albendazole, and ivermectin are used for treating parasites in humans.

But just because you’ve determined that the scat in your yard isn’t from a raccoon doesn’t mean that it’s totally safe. Even scat from creatures like deer has the potential to transmit germs like E. coli, so it’s safer to have a professional remove any unknown feces from your property.

It’s not recommended to try to move raccoon feces yourself.

With the risk involved in handling raccoon poop, it’s best to let a professional handle the process. The potential exposure to disease or bacteria is not worth the money or time you might save by doing it yourself. But if you do have to handle it, it’s best to be overly cautious. “If you have to handle [the droppings], I recommend using gloves, storing and disposing of them properly, and washing your hands well,” advises Ward. Getting rid of raccoons is also a job for a trained professional since wild animals are often unpredictable and need to be handled by an expert. If you’re unlucky enough to have had raccoons make a latrine in your attic or within insulation, you’ll need to replace the insulation; urine and feces ruin the insulation.

Prevention is the best way to keep raccoons away from your property. DIY solutions like sprays of garlic or cayenne or planting cucumber can deter raccoons. Close off any access points to your home, and make your yard less welcoming by tightly closing any garbage cans and covering water sources.

If you spot evidence of a raccoon or wild animal on your property, it’s best to call a pro to help with raccoon removal. “If you’ve seen a raccoon come through your yard just once or twice, it is probably a transient raccoon that is trying to get from point A to point B and happened to cut through your yard,” explains Ward. “If you start seeing an animal like a raccoon regularly that’s when you might want to think about taking action.”

Raccoons are usually on your property to find some food and a safe place to rest, and they can get aggressive if they feel threatened. While you may have heard that seeing a raccoon during the day means it’s rabid, this isn’t always the case. A raccoon could be using the daylight hours to scavenge for more food or move to a new location. But do take extra caution if you see a raccoon staggering, oblivious to noise or other movement, or excreting discharge from the eyes or mouth—this raccoon could be rabid.

“Wild animals will generally leave you alone if you leave them alone, but some more urbanized species like raccoons have adapted to feed off of the human presence, so they will go through the trash or eat from cat food and dog food bowls,” explains Ward. “When they are a little less timid about humans, that is when the potential for a negative interaction is raised. So if it starts coming closer to the house or porch, that may be a good time to call somebody about it. [Raccoons] are one of the cuter animals that we deal with but they can be kind of aggressive or can carry diseases like rabies, so I would advise caution.” When it comes to interacting with wild animals, it’s often best to call in the experts to advise you on how, and if, you need to take action.