Can You Find Crystals in Your Backyard?

You don’t have to believe in the mystical influence of crystals to enjoy their sparkling, iridescent allure. Believe it or not, they might be lurking just beneath the surface in your own backyard. 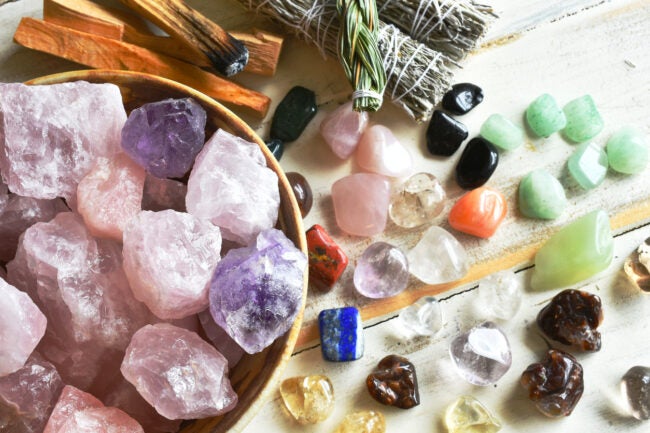 What do singers Adele and Lizzo, quarterback Tom Brady, actors Uma Thurman and Spencer Pratt, pop diva Madonna, and Pliny the Elder, renowned scholar of ancient Rome, all have in common? They all swear by (or swore by, in Pliny’s case) the curative ability of crystals to help and protect them. If you want to emulate these enthusiasts by using crystals to boost your home’s good vibes, read on to discover how and where to source them.

Say you want to get some crystals. Of course, there’s no shortage of New Age boutiques, museum gift shops, and Etsy sellers to satisfy that desire. Exchanging cold, hard cash for quartz and other minerals, however, doesn’t sit well with some people.

Chances are, you’re one of the 230 million people in the United States who shop online at least occasionally. You may even have a pile of Amazon boxes stashed in your basement (or in the corner of your dining room—no judgment). Crystals are no different than hoodies or headphones or air fryers in that they’re available from a huge variety of online retailers at a variety of price points.

Yet given the metaphysical qualities that many attribute to these shiny, sparkly stones, it might feel wrong, or at least a little weird, to order them online just as you would a best-selling thriller or a new Bluetooth speaker. Crystal aficionados advise neophytes to select crystals that they’re drawn to, even if they don’t understand why. Anyone who buys a crystal to hold while meditating or place on an altar is probably already tuned in to their intuition, ready to let their gut guide them when deciding which particular crystal to take home. That’s a lot harder to do when your finger is hovering over a hyperlink or an “add to cart” button.

RELATED: 13 Things That Bring Good Fortune to Your Home

A Question of Ethics

Even when browsing rose quartz, citrine, or moonstones in person, there are ethical questions to consider. Just as with their precious and semiprecious gemstone counterparts, particularly diamonds, even the most quotidian crystals may not be mined conscientiously.

Know that if you purchase unethically obtained stones, you could inadvertently contribute to a whole host of horrifying conditions and practices, including:

Compounding the issue is a lack of transparency in the global gemstone, crystal, and precious-metal mining industry. The standards and certification of fair trade practices that have informed—and transformed—commodities such as coffee, chocolate, quinoa, textiles, spices, tea, and produce are almost entirely absent in the crystal industry.

There’s an awful lot of overlap in the Venn diagram of people who put stock in the spiritual potential of crystals and those who believe in karma. Unfortunately, sourcing conflict-free crystals can be difficult. There’s one surefire way to sidestep this ethical dilemma while also selecting stones to which you feel energetically aligned: Eliminate the middle people and mine your own!

RELATED: The Fascinating History of Garden Gnomes and Why You Should Buy One

Depending on where you live, it could be possible to unearth treasure buried in your own backyard. Places where you might strike it rich include rock beds with mineral veins, road cuts, creek beds and riverbeds, abandoned quarries, and old mine tailings (piles of rocks and debris discarded during commercial excavation).

Western and southwestern states, including Utah, Oklahoma, the Dakotas, Montana, Arizona, and Nevada, are likely to be more fruitful, as are some areas in the South. And it’s relatively easy to uncover quartz, Earth’s most common mineral, just about anywhere.

Doing at least a little preliminary research can help you avoid disappointment. Rock hounds recommend beginning your quest after a rain shower, which washes away dust and makes the sparkling treasure easier to spot. Take along some tools—trowels or spades, pickaxes, sifters, buckets, and work gloves—and start digging. If you’re digging on someone else’s land, make sure to get permission first.

Quartz can be found in all sorts of rocks, and on its own. If you find what you believe is quartz, test the authenticity of your rock by seeing if it’s hard enough to etch glass (quartz is a 7 on the Mohs hardness scale and should do the job easily). It should have a glassy luster and can come in a variety of colors, with white or clear being the most common. Rock hunters recommend digging about 2 feet down to find a quartz pocket in the same area or uphill from your original find.

RELATED: The Best Wind Chimes of 2022

Finders, Keepers (For a Fee)

Many folks enjoy the thrill of hunting for their own cystals, but if you’d like to tilt the odds a bit in your favor, head for a pay-to-dig site. The admission price of these attractions usually includes tools, not to mention guidance. Some offer the opportunity to turn your freshly excavated crystals into jewelry right on site. A few locations to consider:

Genius! The Backyard Movie Theater You Can Build in a Day

Vegetables On Demand: How to Grow Edible Plants Indoors—Starting ...