Invasive insects can destroy crops, damage your home, and even threaten your well being. 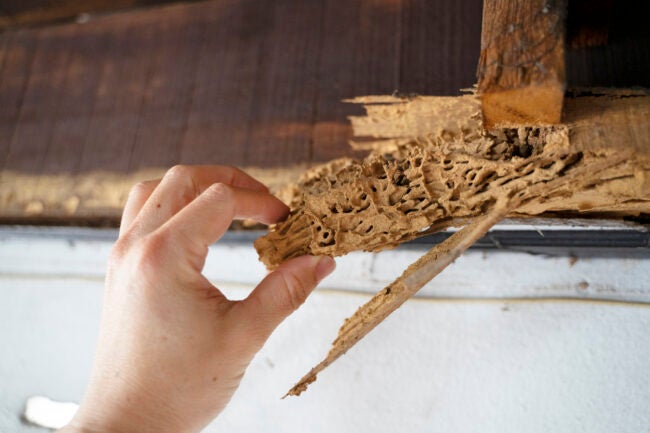 There are many insects that can dine on your garden, lay waste to the structural integrity of your home, or even pose a physical threat to you and your family. While many of these bugs are domestic, some originate from far-away lands. These tiny invaders find their way into the country by stowing away on shipping containers, plants, and even cargo planes, while others are brought to the United States by well-intentioned souls who fail to see the havoc they can cause. If you encounter any of these insects, know how to identify them and what to do.

RELATED: The Best Insect Repellents to Keep the Bugs Away

These insects actually aren’t pests in their native home of Japan, where natural predators keep their population in check. Unfortunately, those predators don’t exist here, which is why these green metallic bugs can gather en masse uncontested in early summer to wreak havoc on the foliage of vegetables, fruit trees, flowers, and other plants located east of the Mississippi River, though they’re sometimes found farther west. You can combat these pests by shaking them off of plants daily, covering smaller plants, or setting out baited traps about 30 feet away from your garden or trees.

This relatively newer invasive species arrived in Allentown, Pennsylvania, from East Asia sometime in the mid to late ’90s. By the early aughts, they were eating their way through the Mid-Atlantic’s fruit trees. Today, they’ve spread to most of the country. Most homeowners are familiar with these bugs as nuisance insects that take refuge from the cold during winter months inside their homes. The stink bug gets its colorful name from the unpleasant odor it releases if squashed. To keep these pests out of your house, caulk your windows, add weatherstripping to your entry doors, and insulate gaps around plumbing.

RELATED: How to Get Rid of Stink Bugs

This invader from the Old World, named for its sponge-like egg masses, made its way to the United States way back in the 1860s. Upon arriving, it set upon the country’s trees and shrubs with an unquenchable appetite. The caterpillar form of this species, identifiable by its fuzzy yellow hair, has the ability to cause widespread deforestation in the Mid-Atlantic and parts of the Midwest. The nests, which consist of dense white web-like masses in tree branches, are easy to spot. Should you discover these tree killers on your property, contact a professional to remove them right away before it’s too late.

RELATED: 10 Types of Moths Every Homeowner Should Know

There are some 28 termite species that are considered to be invasive. The mere mention of their name strikes fear into the heart of any homeowner, and for good reason. Their destructive appetite for wood can cause structural damage to a home’s framing. Since a single colony of termites can contain up to 1 million specimens, it’s little wonder they pose such a grave threat. You can reduce the risk of termites, which are found mainly in the warmer southern half of the country, by storing wood materials, such as firewood, as far from your home as possible. You can also install termite baits around your home’s perimeter or hire a pest control company to perform annual inspections and termite treatments.

With its bright-red coloring and black spots, the spotted lanternfly may be pretty to look at, but you should still squash it if you happen to find one. These pests, which arrived in the United States via a shipping container in 2014, inhabit Oregon, Wyoming, Texas, and Hawaii, where they feast on grapes, fruits, and roses. Then they release excrement on trees and shrubs, eventually poisoning and killing the plants. After slaying the lanternfly, call your local ag extension office to report it, and then purchase a trap to catch its companions.

That treasured oak or elm tree that’s been growing for decades in your backyard may be at risk of this pest if you happen to live in the Northeast. The Asian longhorned beetle, identifiable by its long, striped antenna and shiny black color, feasts on hardwood trees. This insect’s attack is so potent that it causes more damage to hardwoods than Dutch elm disease, chestnut blight, and spongy moths combined. Telltale signs of a tree being eaten by these pests include sawdust around the base of the trunk, pencil-sized holes in the tree, and yellowing leaves. If you spot these pests, report your finding immediately to the USDA.

Considered to be one of the most aggressive species of fire ant, red imported fire ants are an invasive species from Brazil. They can form colonies around homes in the southern and western parts of the country, building their nests in soil or near home foundations, often near HVAC units and electrical boxes. Their stingers, which are loaded with venom, can deliver a very painful sting and even cause life-threatening anaphylaxis. Since these ants band together, you’re likely to receive several stings if you happen to stumble upon a nest. You can call in a professional if you find one on your property, or you can pour boiling water over fire ants’ telltale hills.

RELATED: How to Get Rid of Fire Ants: 5 Tried-and-True Methods

This invasive species made its way to the United States by stowing away in shipments of used tires from Asia sometime in the 1980s. Since then, they have spread rapidly across the country. While Asian tiger mosquitoes can deliver a painful and itchy bite, they also present a serious health hazard due to their ability to transmit life-threatening diseases such as West Nile virus. The best way to avoid the bite of one of these mosquitoes is to defend yourself with a good DEET-based bug spray. Although DEET is the most effective chemical ingredient available, it isn’t advisable for children and can even be harmful to adults. Always follow the manufacturer’s instructions for use and application to avoid harmful effects from ingestion, absorption, or inhalation.

These headline-grabbing invasive pests, formerly known as murder hornets, are some of the newest invaders to the United States, having arrived in the country at the start of the coronavirus pandemic in 2020. These massive hornets, which can be found in Washington State, are immediately noticeable by their size; they can grow to a whopping 2 inches long with a wingspan of 2.75 inches. Their large bodies can carry enough venom to be lethal to humans, especially if a person is stung multiple times. In their native Japan, they’re responsible for around 50 deaths each year. They also pose a huge threat to honey bees, as a single hornet can wipe out an entire colony in hours. If you spot a northern giant hornet nest, contact your state department of agriculture ASAP.

RELATED: These 13 Pests Do the Most Damage to the Home

This dangerous breed of honey bee came into being in the 1950s when southern African bees mated with European honey bees. Often called killer bees, Africanized honey bees are dangerous because they’re extremely aggressive and attack in much greater numbers than the European honey bees found in the United States. Killer bees are responsible for the deaths of thousands of people around the world. Since these bees, which are found in southern California, Texas, Arizona, southern Nevada, New Mexico, Oklahoma, and Louisiana, look virtually identical to European honey bees, you should call an expert for help if you believe you’ve discovered a hive of killer bees.

RELATED: How to Protect Honeybees During Swarm Season

These odd-looking alien-like crickets, which originate from Asia, like to invade homes across the eastern United States, where they make a meal out of wood, cupboards, boxes, and fabrics. They’re particularly attracted to damp places, such as basements. Discourage these invaders from entering your home by keeping the humidity and moisture level in basements low with a dehumidifier and sealing any cracks in the basement walls that might allow rainwater to enter.

Though the Mexican bean beetle may resemble its garden-friendly cousin the ladybug at only 0.25 inch long, these spotted insects are a bane to any gardener who happens to be a bean lover. In keeping with their name, they chow down on bush beans, snap beans, lima beans, and soybeans throughout the eastern half of the United States, along with western states such as Colorado, Nebraska, and Texas. To keep these pests off your beans, you can hand-pick them off, add lures to attract the bean beetle’s natural predator, the spined soldier bug, or spray them with a neem oil that suffocates them.

A Bob Vila Pest-rospective of the Year's Worst Bugs
Advertisement

15 Plants Never to Grow in Your Yard

Japanese Knotweed: How To Get Rid of The "Godzilla" Weed That's a...

12 Landscaping Problems Your Extension Service Can Help You Solve

10 Sustainable Gardening Trends to Try in 2022