Not sure what termites look like? Here’s how to differentiate them from ants and make a plan to remedy termite damage in your home. 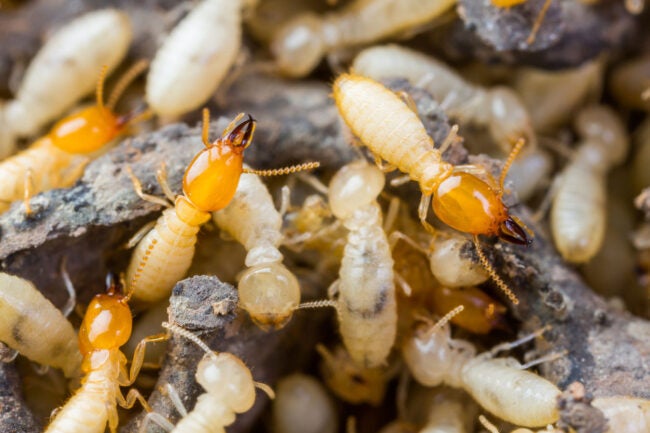 Q: I’m noticing some insects that look like ants in my home. However, they have different characteristics and I’m wondering if they may be termites. What do termites look like so I can better identify them?

A: There are at least 2,000 different species of termites worldwide, with many colonies living in the soil. Thousands could be around any given house right at this moment. About 40 species are active in the United States.

Termites can cause extreme damage to property when they settle into a home or business. This phenomenon, known as a termite infestation, is when termites infiltrate a property and feed off cellulose-based material such as wood.

Termites can look like carpenter ants, as reproductive termites can have similar wings and body structures. Here’s what termites look like and how to differentiate them from other insects.

Termites are typically between ¼- and ½-inch long.

There are a few discrepancies between ants and termites in the body of the insect. Termites have soft bodies with a distinct, hard head region with powerful mandibles (the appendages on the insect’s jaw). Their heads are fixed with straight antennae, usually with beads attached. Flying ants, on the other hand, have bent antennae.

While termites’ bodies are thick, ants have a more defined waist between their thorax and abdomen. Termites also have a blunt end to their abdomen while ants may have a sharp end they use to defend themselves. Termites’ wings are also equal in length and usually white or transparent in color. Flying ants have longer wings in their front and shorter wings in the back.

Their color ranges from cream to reddish-brown.

A termite’s color depends on its species and caste. Subterranean workers and soldiers are pale- or cream-colored in their bodies; however, workers have a larger head that can be orange or amber. Subterranean reproductive termites have dark-colored bodies.

Get a professional consultation
Find licensed termite experts in your area and get free, no-commitment estimates for your project.
Find Pros Now

There are three different castes: workers, soldiers, and alates.

Termites have three different castes within their colony, each holding its own purpose. The alates are reproductive termites that leave the colony to mate and look for a new nesting site. The male and female reproductive termites each pair up to leave the colony, usually during rainy seasons. After they find a new spot, they shed their wings and either take up a home in the soil (subterranean termites) or use wood to create a nest (drywood termites). They then form new colonies within these areas.

Workers make up the majority of the termites in a colony. When exposing infested wood, these are the termites you’ll see. They have soft bodies with no wings or eyes. As they are not a part of the reproductive caste, they are sterile. The younger workers take care of the young while the older workers build and excavate the nest, create tunnels, and search for food.

Soldier termites primarily safeguard the colony and attack predators. How they defend and what their bodies and mandibles look like depend on the species. They rely on the workers for their food sources. The soldier caste is typically smaller than the other castes.

Termites eat wood, so they won’t go after your food.

While ants are notorious for coming into homes for food and eating protein sources, sweets, and food scraps, termites are only interested in cellulose-based sources, including plants, wood, and paper. However, this also means that termites can create nests inside the walls of a home, where they can inflict a large amount of damage. They’ll mainly enter through these structural points of the home and forage building materials, insulation, and furniture for food.

If you suspect termite damage, come up with a plan to address the issue.

There are a few ways to determine if there is termite damage within a property. Termites often make a clicking sound that can be heard through the walls, or homeowners may find loose wings. There also may be termite droppings, called frass, pushed out in the open area to clean the nests.

Tapping the walls also allows homeowners to see if there’s a hollow sound, meaning termites may have already eaten a large amount of the wall’s interior.

If any of the above sounds like your situation, you may have a termite infestation. It’s essential to contact and hire a professional as soon as possible to stop the infestation and mitigate any damage already caused to the home.

Get a professional consultation
Find licensed termite experts in your area and get free, no-commitment estimates for your project.
Find Pros Now