Screwdrivers are more complex tools than you might think. 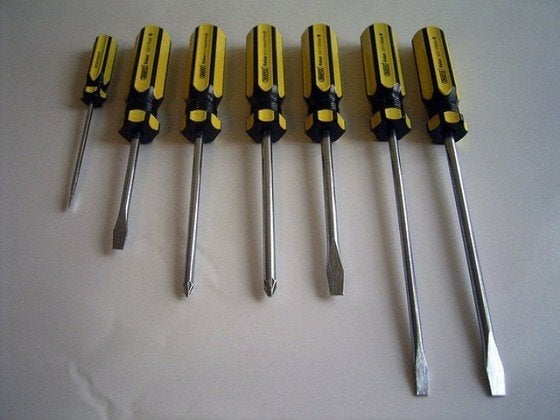 Most screwdrivers do share an overall design. Each consists of a metal shaft called a shank, usually made of steel (though sometimes it’s an alloy of vanadium or chrome). There’s a handle at one end and a tip at the other called the blade. But the commonalities end there, because there are many variations in blades and handles; not to mention those oddball screwdrivers that have no shafts at all, but instead use ratchets offset at a ninety-degree angle to the tip and are used for driving screws in confined spaces.

I’ve found that the handle offers as good an indication as the tip of the purpose for which a given driver is used. Most are shaped like a bulb, large enough to be gripped comfortably in the palm of the hand. Electrician’s screwdrivers usually have plastic handles—be­cause plastic insulates the user’s hands from the risk of electric shock—as well as plastic tubing that runs much of the length of the shaft. Not surprisingly, wooden-handled drivers are more often found in woodshops (the handles are usually beech, but are sometimes made from boxwood or other hardwoods). Some have oval handles, others iron shafts that run the length of the tool with wood riveted to two sides to form a handle. Auto mechanics often favor screwdrivers that have rubber sleeves on the handles for a firmer grip.

Screwdrivers also can be purchased with built-in ratchets and other mechanisms that save on twisting and turning. Sometimes called Yankee drivers or pump drivers, most have spiral grooves in the shaft that turn when the handle is pushed toward the workpiece, only to spring back when released without turning. By shifting a lever, the process is reversed for screw removal. These drivers resemble the push drill.

The variations are truly endless: I’ve even seen one clever ratcheted drive that features a short handle in the shape of a fore­shortened crutch that fits comfortably into a fist for close work. Power drivers are still another option.

Screwdrivers can be purchased with long shafts or short, and are generally identified by the combined length of the shaft and handle. Common sizes range between stubby drivers that are two and a half inches in length and longer drivers about a foot long. But there are also many other drivers, both shorter and longer, ranging up to twenty-four inches long. The tips can be wide or narrow – instrument screwdrivers have slotted tips in the range of inch wide. Screwdriver-like tools can also be bought to drive nuts and bolts, but those tools are really members of the socket family.

At a minimum, a pair of large and small slotted screwdrivers and another pair of Phillips-head screwdrivers should inhabit your toolbox. Often, the most economical way to purchase screwdrivers is in a set, some of which contain as many as twenty screwdrivers. You just might be surprised how, over time, each and every one of those drivers comes to have at least an occasional job to do.

5 Types of Screwdrivers Every DIYer Should Get to Know

How To: Use a Slotted Screwdriver

How To: Use a Phillips-Head Screwdriver

The Best Ratcheting Screwdrivers of 2022

The Best Screwdriver Sets Tested in 2022