All About Skim Coat Plastering

Learn everything you need to know about skim coat plastering—what it is, how to apply it, and what to consider when taking on such a project. 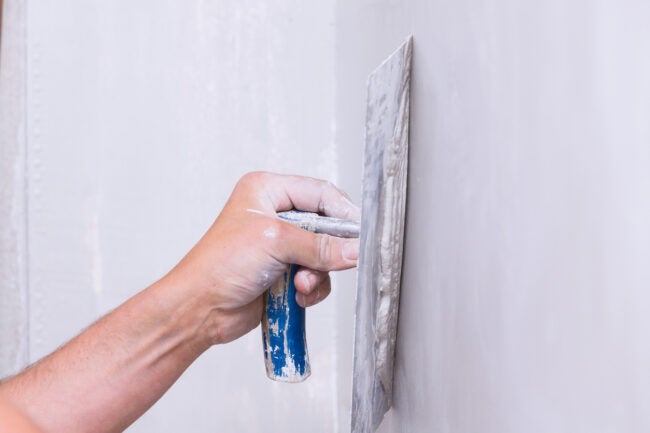 Traditional plastering consists of three separate coats of plaster. The first two, called the brown and scratch coats, are coarse, often with sand, horsehair, and other binders added to the mix. The third or finish coat is a smoother blend, made of water and finely ground lime and plaster.

The three-coat method, which requires strips of wood or metal lath for reinforcement, is relatively rare today. The advantages remain, as it’s durable, adds significantly to soundproofing, and, in the opinion of many people, has more character. Yet because it is both labor- and material-intensive, it can be prohibitively expensive.

This is a middle ground between three-coat plastering and simply taping and coating the seams between sheets of wallboard. The skim-coat approach, which involves the application of a single, eighth-inch-thick layer of plaster over the entire wall or ceiling surface, is a compromise, offering something of the charac­ter and quality of real plaster with the economy and speed of wallboard.

Skim coating requires some skill with a trowel, so it you’ve never held a trowel in your hand, you would be well advised to start out with a little patching work first. But you don’t have to apprentice to a professional plasterer for a year and a day to be able to produce a quite satisfactory finish.

You will need the same tools as a professional plasterer. The key ones are:

Mixing equipment will be re­quired, too, including an empty joint compound bucket or the equivalent, and a mixer bit for your drill.

This tool has a flat, rectangular steel blade, with a wooden handle mounted along the center of its back (view example on Amazon). It can be pur­chased in a number of different sizes, but a four-by-10-inch trowel is a manageable size for beginning plasterers. If you’ve used a similarly shaped trowel to smooth cement or apply mortar, the heft and feel of the trowel will be familiar. If trowels are new to you, however, some practice will be required to master the coordination required in manipulating plaster with the tool.

There are many purpose-made plastering trowels available, with short blades and narrow blades, trowel handles and scraper handles, at inexpensive prices and higher ones. To begin with, a pair of tools, one perhaps two inches and another four inches wide, will be sufficient. Corner trowels are also valuable. To start with, though, a joint-compound corner trowel, if you have one on hand, will prove quite adequate.

This tool acts as a reservoir for the plasterer as he or she applies the material to the wall or ceiling (view example on Amazon). The hawk is held in one hand, a trowel in the other. The hawk has a flat top surface made of magnesium or aluminum, with a wooden or plastic handle beneath. The top is square with rounded corners; several sizes are available (12, 13 or 14 inches square), but to begin smaller is probably better.

Any high-quality brush will suffice for splashing water onto a plaster surface to be smoothed, but I favor a purpose-made blister brush (view example on Amazon). It has a pair of felt pads and sponges a surprising amount of water. It will outlast most other brushes, and will help in the smoothing process when applied directly to the plaster, because it has no bristles to fall out or to mark the surface.

Prepare the surface as you would for taping wallboard joints. However, use the less expensive variety of drywall that is designed for skim coating (it’s often called blueboard because of the color of its paper surface).

You can skim on regular wallboard, too, but you will need to apply a bonding agent first. This is put on with a roller, and is available at most building supply stores.

Apply fiberglass mesh tape to all joints between sheets of dry wall and at all junctions of wallboard and molding. This will help prevent cracking. While not every professional insists on it, I also recom­mend covering the joints first with a base coat of a perlited plaster.

Wet the area first, and then apply the coarse plaster as you would a first coat of joint compound, covering the tape but taking care to avoid leaving lumps or ridges that stand beyond the plane of the wallboard.

I favor a mix of lime and finish plaster blended by hand in a gage (or gauge).

The lime is mixed first in a bucket: pour in the water, add the plaster, and mix, preferably with a half-inch drill and mixing bit. The lime should have the consistency of heavy cream.

Now for the gage:

When the concoction is uniform, you’re ready. And you now have fifteen or twenty minutes before the plaster sets.

Load up a hawk: Not too much at first, no more than you can handle. Don’t attempt to do too big an area at first, either. Start with an area no larger than three feet square.

The sur­face should be fairly smooth, but don’t worry about a mirror-like finish, as the final smoothing is done with the assistance of a little water.

For smoothing, the plasterer’s trowel is again held at a low angle to the fresh plaster surface. If the plaster has set up (hardened), you may need to add some water. Wipe the blister brush over the surface, and try again (a paintbrush dipped in water can also be used to splash the area).

As you smooth, your trowel will accumulate a fine paste as it scrapes the plaster. Use that to fill holes, scratches, trowel marks, or other in­dentations.

TAGS:
WALLS
PLASTER
INSTALLATION
HOW TO
More From Bob Vila

How To: Remove Plaster
Advertisement

How To: Patch Plaster Walls

How To: Rebuild a Wall with Three-Coat Plaster

How To: Remove Texture from Walls