Don’t toss those spade bits quite yet! These three sharpening methods can help you get more use out of your old spade bits. 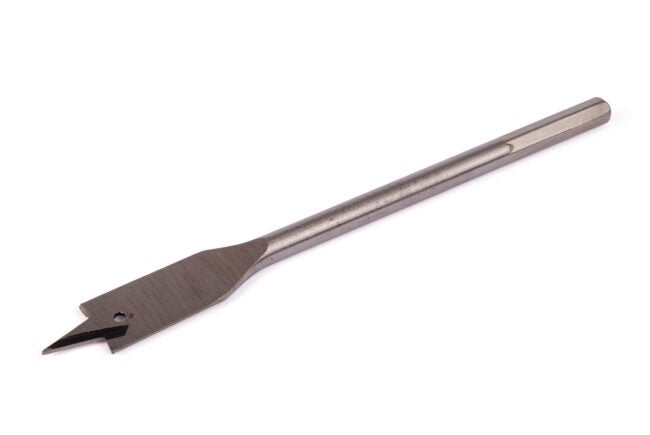 Spade bits, it seems, are always encountering nails, at least in the kinds of rough drilling chores that renovation work involves. Even if you’re well-versed in how to use a drill, nails, screws, staples, and other blade-dulling obstructions happen. Luckily, spade bits are among the easiest of drill bit types to sharpen.

The Anatomy of a Spade Bit

Before we get around to sharpening, let’s take a look at the anatomy of a spade bit. There are five main parts, three of which you’ll sharpen:

How to Sharpen a Spade Bit

If you don’t know which parts of the bit to sharpen, or why, you might struggle with the process. The following sections will point out which areas to focus on so you’ll know how to sharpen a spade bit.

The flats do the bulk of material removal, and they need to be sharp to work effectively. As the bit spins around the center point, the flats come in contact with the wood inside the cutting diameter. If the flats are sharp, they’ll shave off a little bit more with every rotation. If they aren’t, they’ll heat up and eventually burn the wood.

The center point doesn’t remove much material, but it’s vital for drilling an accurate and symmetrical hole. The point bores into the wood ahead of the spurs and flats, so it needs to be sharp to stay on course. If it’s not sharp, making progress will be difficult and you may not end up with a symmetrical hole.

The spurs align with the edge of the spade bit, and it’s important that they’re sharp to make drilling easier and accurate. If sharpened carefully, these points will efficiently remove the outer material, leaving a perfectly sized hole for the rest of the spade bit to pass through. If they’re dull or sharpened incorrectly, the user will have to force the bit through, sacrificing accuracy.

Note: Not all spade bits have spurs. Some have flats that extend from the center point to the edge of the bit. These bits are easier to sharpen, but they’re a bit less accurate.

Methods for Sharpening a Spade Bit

There’s more than one way to sharpen a spade bit. The following guides offer three methods, each with its pros and cons. Be sure to choose the method that sounds most applicable to your situation. It helps if you already own the required materials.

Set the tool rest on your bench grinder 8 degrees down from horizontal (that is to say, 8 degrees past 3 o’clock, when looking at the end of the grinding wheel).

Position the bit with one of its shoulders flush to the wheel with the bevelled side visible from the top. Before starting the grinder, tighten a stop collar on the shaft of the drill just a hair from the edge of the tool rest. Now, start the machine and grind the edge until the stop collar pre­vents further grinding; turn the bit over, line up the cutting flat on the opposite shoulder, and repeat. The stop collar will ensure that the bit is ground symmetrically. Be careful not to grind the center point during sharpening, which could throw its symmetry off-center.

Keep in mind that this method will produce a sharp flat, but it doesn’t do much for the point. It will also remove the spurs entirely, so it’s best for bits without them. But, as long as the flats are sharp, it should add usable life to the spade bit.

While a bit more tedious and time-consuming, sharpening a spade bit with a file is far more accurate than using a grinder and it leaves the bit entirely intact (aside from removing the dulled metal). All you need is a vise or clamp and a set of needle files (which you can find on Amazon).

Start by clamping the spade bit into a bench vise or clamping it firmly to a work table. Then, choose the appropriately sized metal file for the flats. Match the file’s angle to the angle of the bevel on one of the flats (this is easier than it sounds). Make a few forward passes, applying light pressure and counting as you go. Once the flat is sharpened, switch to the other side of the spade bit, and make the same number of passes on that side to ensure symmetry.

The same process applies to each spur and the center point. Simply match the angle of the bevel and make a few forward passes with the file, repeating the process on the other side.

Note: Your file should go past the bit from shank to tip, not tip to shank. If you file toward the bit, you will risk running your hand into the center point or spur, causing a potentially serious injury.

3. Use a drill sharpening machine.

If you’re lucky enough to own a drill sharpening machine with a spade bit attachment, you can use it to freshen up your dull spade bits. The process is fairly easy:

The best way to test a freshly sharpened spade bit is to drill a few holes in a piece of scrap wood. Be sure that the wood doesn’t contain nails, screws, or staples, or else you’ll have to go back to the drawing board.

As the bit bores into the wood, it should cut smoothly without much hopping or wobbling. It also should not generate smoke. Stop about halfway through the hole and check for any burning. If the bit is cutting smoothly and not causing any burning, and if the hole looks symmetrical, you’ve sharpened it properly and it’s ready for use.

FAQs About How to Sharpen Spade Bits

If you are still confused about using and sharpening spade bits, here’s are some of the most frequently asked questions on the topic.

Q. What projects are spade bits designed for?

Spade bits are popular for rough carpentry and electrical projects because they enable users to bore holes quickly and accurately in wood, plywood, and other softer materials. They’re also helpful for installing doorknobs in slab doors if used carefully.

Q. Can a spade bit be used in a drill press?

You can use a spade bit in a drill press, but there are a few things to keep in mind if you do:

Q. Is a spade bit different from a Forstner bit?

Yes. A spade bit’s design makes it useful for drilling entirely through a material. A Forstner bit can drill through a material, but it’s commonly used for creating round, flat-bottomed recesses in a workpiece to accommodate dowels and hinges that don’t pass completely through.

Spade bits are rough carpentry and electrical tools, so they’re best used to bore holes no one will see. Hole saws are more appropriate for applications where the appearance of the hole and surrounding materials matter, such as:

Also, spade bits are not for use with metal, while some hole saws are designed specifically for this purpose.

We hope you now know that the pile of dull spade bits in your workshop isn’t destined for the garbage and that these bits actually aren’t difficult to sharpen. Whether you choose to use a bench grinder, a needle file, or that old drill bit sharpener, those old bits can be brought back to life.

How To: Clean Your Toolbox and Workshop
Advertisement

10 Ways to Welcome a House Guest