Take a comprehensive look at the most common wood joints. 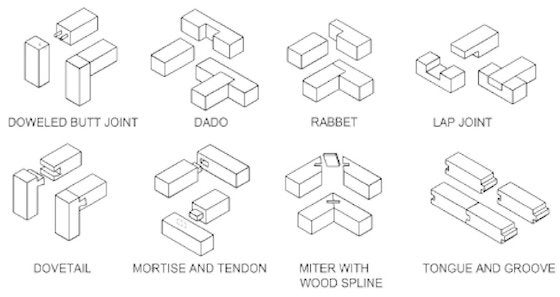 The language of the joiner is filled with words that we know well from ordinary usage but here have new and distinct meanings: Lap, edge, butt, and finger joints are technical terms to woodworkers. Joinery jargon gets still more compli­cated when you add in some other kinds of joints, like mortise-and-tenon, tongue-and-groove, dovetail, dowel, dado, spline, and rabbet. Not to men­tion such combination joints as cross laps, dado rabbets, dove­tail laps, and keyed miters.

Yet this is, to say the least, a rather incomplete list of wood joints. With the introduction of the biscuit or plate joiner, any number of these joints are strengthened or varied thanks to the presence of the little, football-shaped wafers.

Don’t be intimidated by all these possibilities. Try thinking of them as an embarrassment of riches. Pretty soon you will find that it’s fun to figure out which will work best for a given project or a particular application.

If you are just making your first foray into the land of the join­ers, you’d probably do best to start with a simple joint like a dado or a rabbet. (If you’ve ever made anything, you’ve al­most certainly made a butt joint already.) A picture frame typically uses a miter joint, so perhaps you’ve done that, or would like to try.

So here they are, the basic kinds of wood joints, in some­thing approaching simplest-to-hardest order.

Butt Joint. When you join two squared-off pieces of wood, you’ve made a butt joint, whether the workpieces are joined edge to edge, face to face, edge to face, or at a cor­ner. A butt joint is the simplest to make, requiring little shap­ing beyond cuts made to trim the workpiece to size. As with all joints, however, the surfaces to be joined must fit together tightly; if they don’t, a block plane may be used to smooth the end grain. Glues, nails, screws, dowels, and other fas­teners may be used to secure a butt joint.

Miter Joint. As you know from the miter box and the miter gauge on your table saw, a mi­ter cut is basically an angle cut (though if you consult your dic­tionary, you’ll get told some­thing like, “A miter is an oblique surface shaped on a piece of wood or other mate­rial so as to butt against an oblique surface on another piece to be joined with it.”).

To put it another way, a miter joint is a butt joint that con­nects the angled ends of two pieces of stock. The classic ex­ample is a picture frame, with its four butt joints, one at each corner, with the ends of all the pieces cut at a forty-five-degree angle, typically in a miter box.

The miter joint has two signal advantages over a butt-corner joint: First, no end grain shows, making for a more regular and attractive joint; second, the sur­face for gluing is increased. Mi­ter joints may also be fastened with nails, screws, dowels, or other mechanical fasteners.

Rabbet Joint. A rabbet (or re­bate, as it is also known) is a lip or channel cut from the edge of a workpiece. A typical rabbet joint is one in which a second piece is joined to the first by setting its end grain into the rabbet. Rabbet joints are frequently used to recess cabinet backs into the sides, or to reduce the amount of end grain visible at a corner.

The rabbet joint is much stronger than a simple butt joint, and is easily made either with two table or radial-arm saw cuts (one into the face, the second into the edge or end grain) or with one pass through a saw equipped with a dado head. A router or any one of several tradi­tional hand planes, including a plow plane, will also cut a rab­bet. Glue and nails or screws are frequently used to fasten rabbet joints.

Dado Joint. When a channel or groove is cut in a piece away from the edge, it’s called a dado; when a second piece set snugly into it is joined to the first with nails, glue, or other fasteners, a dado or groove joint is formed. Some cabinetmakers differentiate between groove and dado joints, insisting that grooves are cut with the grain, dadoes across. Whatever you want to call them, grooves or dadoes are cut easily with a dado head on a radial arm or table saw.

The dado joint is perfect for setting bookshelves into uprights, and can be fastened with glue and other fasteners.

Lap Joint. A lap joint is formed when two pieces have recesses cut into them, one recess in the top surface of one piece, the second in the lower surface of the other. The waste material removed is usually half the thickness of the stock, so that when the shaped areas lap, the top and bottom of the joint arc flush.

Lap joints are used to join ends (half-laps) or mitered corners (miter hall-lap). Dovetail shaped laps are sometimes used to join the ends of pieces to the midsection of others (dovetail half-laps).

Lap joints can be cut with dado heads, as well as with standard circular sawblades on radial- arm or table saws. Gluing is usual, though other fasteners, including dowels or wooden pins, are also common with lap joints.

Spline Joint. A spline is a thin strip, usually of wood, that fits snugly into grooves on surfaces to be joined. Miter, edge-to-edge butt, and other joints may incorporate splines. Once the surfaces to be joined have been cut to fit, a table saw can be used to cut matching kerfs.

The spline itself adds rigidity to the joint, and also increases the gluing area. As most splines are thin, they are usually made of hardwood or plywood.

Tongue-and-Groove Joint. Flooring, bead-board, and a variety of other milled, off-the-shelf stock are sold with ready-made tongues and grooves on opposite edges. The edges can also be shaped with table or ra­dial-arm saws; in the past, matching hand planes did the job.

For finish work, nails are driven through the tongues of the boards, and the groove of the next piece is slid over them (“blind-nailing“). For rougher work, as with certain kinds of novelty siding and subroof or sheathing boards, the stock is face-nailed. Glue is used only infrequently, as one of the chief advantages of a tongue-and-groove joint is that it al­lows for expansion and contraction caused by changes in temperature and moisture content.

Mortise-and-Tenon Joint. The mortise is the hole or slot (or mouth) into which a project­ing tenon (or tongue) is in­serted. Most often, the mortise and tenon are both rectilinear in shape, but round tenons and matching mortises are to be found. The mortise-and-tenon joint is harder to shape than other, simpler joints (both pieces require considerable shaping), but the result is also a great deal stronger.

Finger Joint. Also known as a drawer or box joint, this one is most often seen in drawer join­ery. Interlocking rectangular “fingers” are cut into the end grain of drawer sides and ends.

Though precise cutting of the fingers is essential, finger joints require only relatively simple ninety-degree cuts that can be made by hand or using a router, radial-arm, or table saw.

Finger joints, like dovetail joints, are sometimes used as a decoration, adding a contrast­ing touch as well as strength to the joined pieces.

Dovetail Joint. Occasionally, there’s a bit of poetry even in the workshop. As early as the sixteenth century, this joint was identified by its resemblance to bird anatomy. A thesaurus of the period termed the joint “A swallowe tayle or dooue tayle in carpenters works, which is a fastning of two piece of timber or bourdes together that they can not away.”

The dovetail is one of the strongest of all wood joints. It’s also one of the most challeng­ing to make, requiring careful layout and the investment of considerable cutting and fit­ting time. Its shape is a re­versed wedge, cut into the end grain of one piece, that fits into a corresponding mortise on a second workpiece. Dove­tails are traditionally used to join drawer sides and ends and, in the past, for many kinds of casework furniture.

The good news is that there are some jigs on the market (though they’re hardly inex­pensive) that make layout and cutting dovetails a snap. The jig is generally used along with a router with a dovetail bit.

How To: Make a Mitered Corner

The 10 Best Woods for Woodworking (According to a Pro)