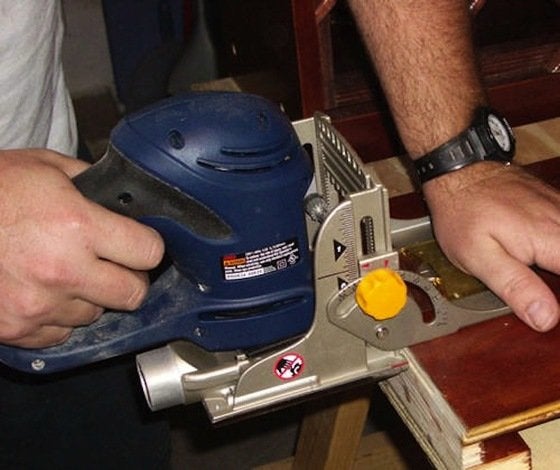 The world of woodworking got along quite nicely, thank you very much, without the plate joiner. Yet making furniture and cabinetry hasn’t been quite the same since this clever device arrived. Sure, there are the orthodox woodworkers who refuse to budge from their old habits, but there are lots of others who have found that even tradi­tional joints are made stronger and better with the addition of a few lit­tle wafers inserted just so.

The plate joiner, also known as a biscuit joiner, is relatively new to the home workshop. For the amateur woodworker, it is a double blessing: The layout and shaping of a biscuit joint require only a matter of min­utes to master. By using the football-shaped “biscuits” to reinforce a butt, miter, or edge joint, you can add considerable strength and dura­bility.

The biscuit joiner is, in essence, a specialized saw. Most models have a four-inch circular sawblade mounted horizontally. When at rest, the blade is withdrawn into the base of the joiner, with a sliding fence in front of it. When in use, the fence is held flush to the edge to be joined, and, with the blade spinning at full speed, the saw is plunged into the piece.

The blade cuts a rounded kerf of a size determined by a depth ad­justment. A corresponding groove is then cut into the piece to be joined to the first. A few drops of glue are applied to each groove, and the beech biscuit is inserted.

Don’t glue first, then look for clamps… the plate tends to swell almost immediately. Get ready first, do a dry run on the joint, then apply the glue. The glue causes the biscuit to swell, which helps to strengthen the joint. The joint is then clamped tightly until the glue has set thoroughly.

Like a doweled or splined joint, the biscuit joint is invisible after as­sembly, and produces a tight, strong bond.

Plate joiners are sold as distinct tools by many manufacturers. Con­version attachments are also sold for some routers, angle grinders, and drill presses that allow those tools to do plate joiner duty as well as their usual tasks. Benchtop stands are available for most standard bis­cuit joiners; they allow a series of workpieces to be presented to the joiner, rather than requiring each piece to be secured individually.

The biscuit joiner is well suited to joining plywood. It’s handy for face frames on cabinets (the fixed horizontal and vertical elements that frame the doors and drawers). Miter joints, too, are greatly strengthened by the presence of biscuits.

How many biscuits should you use? Place them at roughly six-inch intervals. On thick stock, insert two, top and bottom, at similar intervals. Stay two inches or more from the end grain when working on an edge; when gluing end grain, place the biscuits at three-inch intervals.

Safety Suggestions. Clamp the workpiece or fix it in position securely with a bench hook or other stop. Don’t try to balance both machine and workpiece. Don’t force the machine: It’s powerful enough to cut rapidly, but you’ll get neater, more regular work at a more measured pace. Let the saw whir to a stop before you put it down, too.

The Best Biscuit Joiners of 2022
Advertisement

The Best Benchtop Jointers of 2022

The Best Plate Compactors of 2022