Worried about the hazards lurking in your child’s room? Skip the fretting and check out these expert tips on how to make the nursery the safest place in the house. 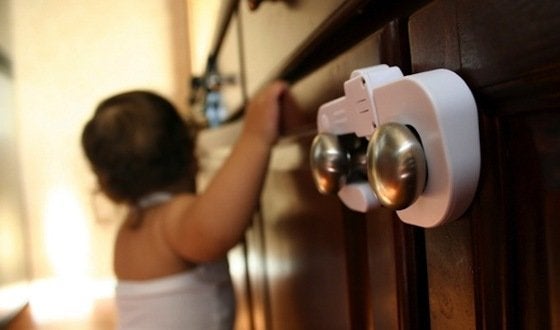 Want to know what you need to do to make sure baby’s nursery is safe? Don’t ask your mom, says Meri-K Appy, president of the Home Safety Council.

“Things have changed so much as far as safety,” Appy says. “You really need to make sure you have the best, latest information so you can keep your children safe.”

Crib Care
The crib should be the safest place in the house,” says Jamie Schaefer-Wilson, child safety advocate and author of The Consumer Reports Guide to Childproofing & Safety: Tips to Protect Your Baby and Child from Injury at Home and on the Go. “There should be no soft bedding, comforters, blankets, dolls, bumpers or quilts,” she says. “It may seem severe, but you don’t hear of babies becoming hurt or entangled in an empty crib.”

Schaefer-Wilson says parents often underestimate babies’ abilities to get into trouble, even at a very young age. “Kids put everything in their mouths,” she emphasizes. “It just takes one second for something to happen.” Removing all toys from the crib is one of the best ways to keep baby safe.

Some studies have shown that bumpers or other soft items in the crib can increase the risk of Sudden Infant Death Syndrome, according to First Candle/National SIDS Alliance and the American Academy of Pediatrics. While some trade groups maintain that soft items don’t pose a danger, activists say it’s better to be safe than sorry.

And while it’s important to make the crib environment as safe as possible in your home, don’t forget to safety check anywhere a baby will be sleeping, such as a babysitter’s or grandparent’s house. “They may have outdated information,” Appy says. “You really have to confront old myths. Make sure they keep the crib clear and don’t wrap the baby in blankets or put them to sleep on their stomach. Create a safe sleep environment wherever baby will be.”

Another thing to remember is to always use a tight-fitting, crib sheet — never put an adult sheet on a baby’s mattress. “It can be tempting in the middle of the night when you’re out of clean sheets and you just want to sleep, but it is really so dangerous,” says Schaefer-Wilson. “Babies can easily become entangled.”

Appy says while it may sound austere, the facts support the empty crib advice. “Research is very clear on this,” she emphasizes. “The safe way for a baby to sleep is on her back in a very sparse environment with a firm mattress and tight-fitting crib sheet.”

Window Hazards
The designer-photo image of a bright, airy nursery with huge windows and long, sheer curtains backlit by sunshine may be a beautiful sight, but experts say it is not the safest place for baby to rest.

Windows are a major hazard in children’s rooms, especially in multi-level homes or high-rise apartment buildings. But if you take care to create a safe environment, you can mitigate the dangers windows cause, says Appy. “Never put a crib in front of a window,” she says. “Babies become toddlers soon, and they can easily climb up and fall out.”

Install window guards, recommends Schaefer-Wilson. “A screen won’t stop a child from falling through an open window,” she says. “Window guards are a good idea, just ensure they’re properly installed. Look for something hardware-mounted that has a latch to allow for safe escape in case of fire.” Another option is clear, hard plastic window covers. Just make sure they’re easily removable for an adult in case of fire.

Be aware of the window coverings you choose for the baby’s room, says Michael Cienian, vice president of quality assurance for Hunter Douglas and past president of the Window Covering Safety Council (WCSC).

Window cords may seem like a small detail, but ignoring them can be a tragic mistake. “Strangulation deaths on window cords really do occur, and it’s usually with children under two years old,” Cienian says.

He says all window blinds sold in the year 2000 or later should have built-in safety features. But if your blinds are older, the WCSC has free retrofit kits that will make pre-2000 blinds safer for homes with children. If you’re installing new window coverings, cordless options are now available, and that’s the safest choice.

If you’re unsure about the age or safety of your home’s blinds, here are some tips from Cienian:

Electrical Dangers
Outlet covers are often one of the first things parents buy when they’re safety proofing their home. Here are just some of the many options available today:

Also, be aware of cords from outlets snaking around a baby’s room. Not only do they pose tripping hazards, they also make the outlets more attractive.

Can’t figure out what you need for your house or want to simplify shopping? The Child Safety Kit from CableOrganizer.com offers several different electrical — and other — safety solutions in one package.

Changing Table Safety
The changing table can be a hidden danger spot in many nurseries, says Schaefer-Wilson. “Parents sometimes leave kids [unattended who] they think can’t roll off, but they will surprise you,” she says. “Children have fallen off changing tables and died.”

Appy points out that the safety straps on changing pads should not be ignored. They wouldn’t be there if someone hadn’t been hurt before, she says.

Also, be cautious about the baby care items you leave in the area. “Never leave an oil or a powder on the changing table,” says Schaefer-Wilson. “If a child ingests the oil, they can’t get it out of their lungs and they can actually suffocate that way.” She says powders and other creams should also be kept out of reach, preferably stored away in a medicine cabinet that isn’t in the baby’s room. For ease of use, however, try installing wall shelving high above the changing table where the child—even a standing toddler—can’t reach.

Safe and Secure Furniture
One subject that has been gaining attention as a safety hazard is furniture tips and falls. It’s garnering more attention for good reason, says Schaefer-Wilson: “Think about it — what does a child do when they want to get to something on a dresser?” she asks. “They open the bottom drawer and they step in.”

She says just opening all of the drawers on the dresser, if the drawers are full, can cause a tall piece of furniture to tip over. She also warns that in any room, putting a television on top of a dresser is a bad idea because kids can climb anywhere, and television falls have been associated with many tragic tipping deaths.

Furniture straps are an essential ingredient in any nursery, she says, and they should be installed before the child is old enough to climb. “[Children will climb] as soon as they can, which is going to be earlier than you think,” she says.

Breathe Easy
Because babies’ systems are still developing and they breathe at a faster rate than older children and adults, it’s especially important to ensure the indoor air in your home, and specifically in your child’s nursery, is healthy.

One way to ensure better air quality for your whole house is to buy an air filter specifically designed to trap harmful particles like formaldehyde and volatile organic compounds (VOCs), like the SafeHome air filter. “It is sad that many of the exciting steps taken to prepare for a child’s arrival, from painting walls to moving into a larger home, can be detrimental to their health,” company president Sam McLamb says.

Beyond filtering out harmful air quality problems, you can help your child by choosing “green” items and practices. Natural and organic mattresses are a great choice since the fire retardants used in conventional mattresses contain many harmful chemicals. “We decided to go with a natural mattress after we shopped and realized the regular ones were recommending they be aired out before being used,” McLamb says. “The recommendations to leave vinyl mattresses outside for two weeks before use were not comforting.”

If you’re painting a room, choose low- or no-VOC paints, and have your home checked for radon, lead and mercury by an environmental inspector. If you’re worried about allergies, add a mold inspection to the list. You and your baby will breathe easier because of it.

Odds and Ends
Some other things to consider: