Disguise appliances by seamlessly integrating them into cabinetry, allowing your kitchen to remain a spic ’n span showplace. 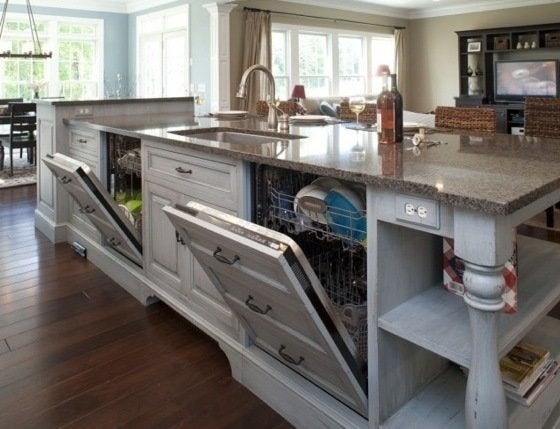 Call it the great cover-up. In a trend fueled by manufacturer innovations and designer imagination, appliances are the sight-unseen heroes of the home. Refrigerators, dishwashers, and TVs are melding into the woodwork—and that’s just where many homeowners want them. Kitchens are looking more like extensions of living rooms; small appliances are being streamlined to fit in just about any room.

Sub-Zero is credited with being the leader of built-in kitchen design. “The biggest and most unsightly appliance is the refrigerator, and Sub-Zero was the company that started disguising refrigerators with panels,” says Peter Salerno, a certified master kitchen and bath designer in Wyckoff, N.J. Panels trick the eye. They take away from a refrigerator’s mass and allow it to blend into the adjacent cabinetry. Sixty percent of Sub-Zero’s refrigeration production line is intended for panels or decorative appointments, according to Paul Leuthe, Sub-Zero corporate marketing manager.

Connect with a kitchen expert
Find licensed kitchen design and construction pros in your area and receive free, no-commitment estimates for your project.
Find Pros Now

As a result, refrigerator integration has taken on exotic new forms. In one kitchen project, Salerno commissioned an artist to paint an urn overflowing with flowers on the center panel. “That’s high impact,” he says. In another kitchen, the refrigerator was cloaked behind a French door painted with a faux scene of the homeowner’s backyard which overlooked the Pacific Ocean. “It looks like you’re looking through the back door of the house, but in reality you’re looking at the refrigerator-freezer. It’s one more point of interest that becomes a conversation piece.”

Custom pieces often come with big price tags. Troy Adams, a Los Angeles-based kitchen and bath designer, introduced the TansuChill refrigerator as part of his hidden furniture line. The unit is a Sub-Zero refrigerator-freezer encased in traditional Japanese-influenced cabinetry. It can cost more than $24,000.

Camouflaging appliances, rather than tucking them off to the side so they don’t overpower the space, is just plain practical. Relegate them to the recesses, and you can lose the efficiency inherent in the traditional work triangle. But make them a focus and you won’t mind putting them front and center. “Wherever they go, they’re going to look great. Whether that means paneled sides, handpainting on a surface or using interesting door handles, it’ll make a statement,” Salerno says.

Beside higher price tags, there are some drawbacks to integrated appliances. Wood panels are especially vulnerable to moisture. The biggest threat is handling units with wet hands. Moisture can wear around handles and knobs and mar the finish. Another downside is that when appliances have to be replaced, the front panel may also need replacing. That not only adds to the cost, it adds on a complication: finding an exact match with the surrounding woodwork.

Dishwashers are another commonly masked appliance. With control panels atop the door, they can easily disappear behind cabinetry. In addition to standard panels, Salerno has disguised dishwashers with shallow grain-bin drawers filled with beans and pasta.

Chalkboard facings are another option, allowing the real estate to be used as family message centers. Custom dishwasher panels can add 50 percent to the cost of the unit, but Salerno is quick to add that clients rarely regret going “that extra step to customize. That type of detailing says it’s a custom piece. And that can drive an entire home.” For faster, less permanent facelifts, magnetic panels are available in a wide range of styles, from whimsical to classical.

Other hide-and-seek appliances? Cooktops concealed by cutting boards when not in use, paneled warming and refrigerator drawers, and microwaves that slide out behind pocket doors. Artful ventilation hoods, such as Miele’s stunning wall and island-hood line, are so sculptural in design, they often wind up as kitchen centerpieces.

Karen Black-Sigler, a certified kitchen designer and owner of A Karen Black Company in Oklahoma City, Okla., keeps her clients’ kitchen visitors guessing with hidden TVs. “We put flat-screen TVs into sleeves that pop out of islands and then revolve 360 degrees. It’s a great way to integrate televisions into the kitchen.”

Once upon a time, kitchens were off-limits to guests, but no more. Now they’re central to entertaining. And guests love the element of surprise, says Black-Sigler. “It’s exciting. When you’re able to walk into a kitchen and have people wonder where your appliances are, you have a kitchen that doesn’t look like a kitchen. And that’s appealing.”

The trend to disguise appliances as armoires and furniture pieces took off in the early 1990s. Then, says Black-Sigler, came the popularity of stainless-steel appliances and suddenly consumers became comfortable with refrigerators, dishwashers and ovens being focal points of their kitchens. But she’s starting to see a trend back to appliance integration. “Lots of people have had stainless-steel appliances and they understand the difficulties in keeping them smudge-free, so we’ve gone back to integrated appliances a bit more,” she says.

For those looking for the ultimate disguise, there’s Troy Adams’ hidden kitchen, which is actually a kitchen within a kitchen. Prep and cleanup is secreted in a separate room behind wood paneling allowing the main display kitchen to remain a spic ’n span showplace.

Connect with a kitchen expert
Find licensed kitchen design and construction pros in your area and receive free, no-commitment estimates for your project.
Find Pros Now

Before & After: A Breakfast Nook Goes from Dated and Drab to Mode...