4 Things to Know About the Iconic American Foursquare

Here's how to spot the no-frills house style popularized in the early 1900s. 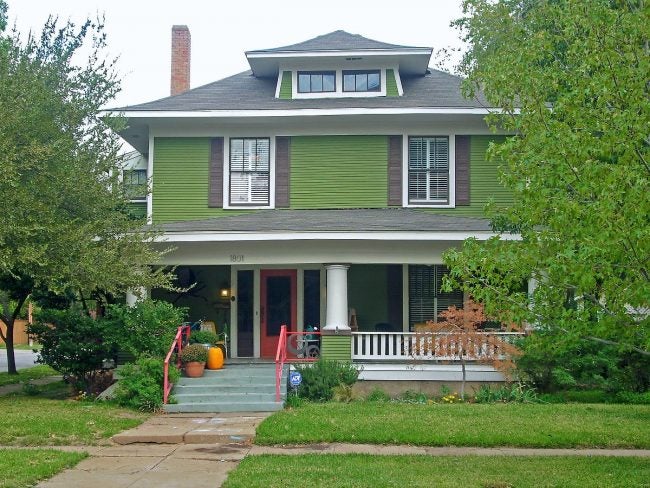 Beginning in the 1890s, the Foursquare was a popular American house for its budget-friendliness and simple style. But there’s still a lot to appreciate about the buildings that have lasted into the 21st century. Indeed, by sticking to a primarily square or rectangular layout, this architectural style has mastered and maximized a basic floor plan. Ahead, learn how to pick out the Foursquare house on the block as well as the history in those walls.

1. You can recognize a Foursquare house from the sidewalk by its symmetrical appearance.

It’s easy to tell if you’re in a Foursquare house, if you can count to four! Four is often the number of equal-sized rooms on the first and second floors. Stroll through any century-old neighborhood, though, and you’ll find they’re easy to spot even without peeking inside. From the sidewalk, you will see a cube-shaped structure with a pyramidal roof and central dormer. There is often a wide one-story porch, too.

2. Floor plans are variations on a theme.

Not all Foursquares are alike. Rather, the basic four-plus-four floor plan was often modified. In some cases, the living room occupied half of the ground floor. In others, the ground floor was extended to accommodate the kitchen and pantry. The bathroom was located on the second floor—assuming, of course, the owner wanted one. In one early Sears plan, the space was labeled “toilet or store room.”

There are also stylistic differences. Homeowners wanted some frills to enliven the functional and efficient floor plan. The Colonial Revival Foursquare has a portico or pediment while the Craftsman version is identifiable by the exposed rafters and beamed ceiling. Sears Roebuck’s catalog sold a Mission-style Foursquare, the “Alhambra,” which had stucco siding and curvilinear parapets. On the ground floor was the “solarium,” a room that in less exotic Sears Foursquares was designated the “parlor.”

3. Their popularity rose for the simple, budget-friendly design sold by catalogs.

The Foursquare was a reaction against the exuberance of the Queen Anne style, full of decorative architectural elements and complex rooflines. That rambling asymmetry was out, and rectilinear was in.

Because they could be sited on small lots without sacrificing too much interior square footage in the rectangular design—not to mention their lack of ornamentation—they were a favorite with the budget-conscious. Another reason for their ubiquity: Sears Roebuck and other mail-order retailers sold prefabricated houses in the Foursquare style. Between 1908 and 1940, Sears Roebuck sold 75,000 prefabricated houses in 370 designs. Foursquare designs were in the company’s 20 best-selling house designs.

RELATED: 11 Vintage Houses That Came from a Catalog

4. Most Foursquare houses today are (often restored) remnants of a bygone era.

By 1930, Foursquares were no longer being built. Plenty remain, though, to tempt the amateur restorer. Whether it’s made of wood, brick, or stucco, the Foursquare has an important place in the history of American domestic architecture.