Chop Saw vs. Miter Saw: What’s the Difference Between These Cutting Tools?

Chop saws and miter saws are often confused for the same tool. But there are important differences every DIYer should know. 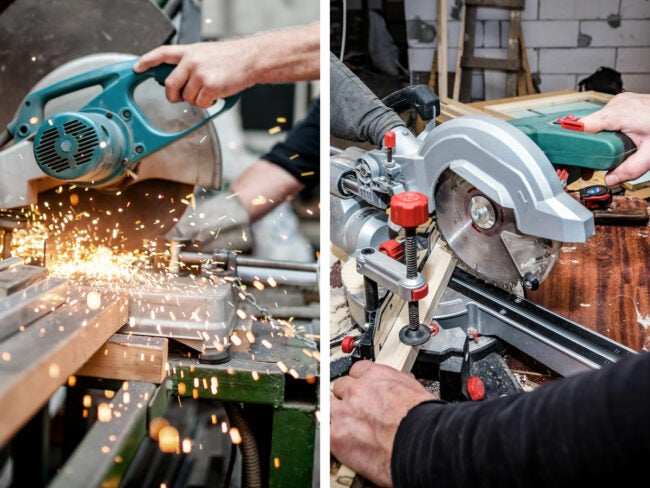 It’s not unusual for miter and chop saws to get mixed up. The fact that miter saws are sometimes mistakenly called chop saws doesn’t help. At a glance they have a lot in common. For example, their motors, blades, fences, and clamps often have similar configurations.

However, in terms of performance and capabilities the two saws are quite different, and choosing the wrong tool could be an expensive mistake. The following article looks at the chop saw vs. miter saw question in detail and provides valuable information to help clear up which tool is made for what type of cut. Use this guide to make the right tool choice for your projects.

The way that a chop saw works is right there in the name. It chops straight up and down, which is not unlike the swinging of an axe. It is a chopping motion, with the blade usually at 90 degrees to the fence. A chop saw also uses a powerful electric motor that drives a rotating blade.

So strictly speaking, the chop saw is a cross-cutting tool only. However, they are not entirely without versatility. While blade movement is restricted, some models have a fence that can be turned to up to 45 degrees, thus allowing miters to be cut.

Chop saws are frequently used in engineering and welding shops where high productivity is a priority. Often they are heavy-duty tools, though models aimed at the DIY user are also widely available.

Our Recommendation: PORTER-CABLE Chop Saw on Amazon for $123.45
A powerful 15-amp motor, 14-inch blade, and competitive pricing make this a great choice for home users or small engineering shops.

A search for the best chop saw will often turn up a list of miter saws. As we have already noted, it is an understandable mistake because the basic rise and fall motion of the blade is the same. However, miter saws can also rotate through 45 degrees or more to right and left, thus sawing at a variety of angles. Preset stops (called detents) at popular angles like 15 or 30 degrees make for quick and easy setups.

Compound miter saws take cutting versatility a step further. In addition to rotating the saw blade, they can also tilt the blade over, either to one side or both, thereby creating compound angles with a single cut.

Add horizontal rails that increase the cutting width, and you have a sliding compound miter saw. These saws offer tremendous versatility, and as a result these are perhaps the most popular type of saw for cutting wood in both workshops and on job sites.

A chop saw is best for cutting metal.

True chop saws are almost exclusively used for metal cutting. As a result they often come fitted with an abrasive cutting wheel rather than a toothed blade. The wheel is a solid disk with industrial diamond coating bonded to the edge, and it’s more effective for cutting various types of steel and cast iron than a blade with teeth.

Toothed blades, usually with carbide-tipped teeth, are also available. These are generally used for cutting so-called “soft” metals such as aluminum and brass. An abrasive wheel should not be used for these materials, as the metal particles can clog the cutting surface.

These blades often look very similar to those used on miter saws but the two are not interchangeable, and attempting to do so can be dangerous. Chop saw blades frequently have more teeth, and they are designed to run at different speeds. Even if they are the same diameter, the arbor (the hole in the middle) will likely be a different size so they won’t fit. These details are important when ordering replacements.

A miter saw is ideal for cutting wood.

Miter saws are really a woodworker’s tool, and arguably the most popular type of wood saw. While they can’t cut wide sheet material like a table saw, or curves like a bandsaw, they are excellent when cutting material like dimensional lumber for framing, decking, or flooring. Depending on the capacity of a particular machine, they can tackle anything from small square stock to boards a foot or more wide.

As with chop saws, the blade choice can have considerable impact. A 24-tooth general-purpose carbide-tipped blade is normally supplied, and it’s a great all-arounder for softwoods. However, blades with a higher tooth count will provide a smoother cut in hardwoods. There are also blades available specifically for cutting plywood and melamine.

With the correct blade, it is possible to use a miter saw to cut small pieces of aluminum. However, it shouldn’t be done on a regular basis because swarf (waste metal particles) can get into the saw’s moving parts and could cause permanent damage.

Chop saws are larger and can operate at lower speeds than miter saws.

While a metal chop saw is usually a benchtop device, they are often large and heavy tools. It is recommended they be bolted down to provide adequate stability and safety. The majority have a blade size that ranges from 12 to 15 inches.

Chop saws generally run much more slowly than miter saws, typically around 1,500 rpm rather than 3,000 rpm plus. Trying to cut metal too quickly can cause excess heat, and as the metal expands, there’s a danger it will bind the blade.

An interesting development in the last few years has been the hybrid chop saw, like this one from Evolution Power Tools on Amazon. These are a more compact model designed for DIY use with 7¼-inch blades. While still intended mostly as a metal-cutting tool, they can also be used for wood, and they are particularly useful if converting old pallets or scrap wood that might have nails or staples hidden inside.

Miter saws can be very compact, portable, and are more suitable for home workshops than chop saws.

A miter saw is not just a very versatile wood cutting saw; it also comes in a wide variety of sizes. Like chop saws, they are described by their blade size.

Being lighter than most chop saws, miter saws are more portable and hence more popular on the job site. While often found resting on any available surface (or even the floor), a variety of leg stands and workstations are available. These fold down for easy transportation but provide a comfortable working height and a stable sawing platform.

Related: The First Power Saw New DIYers Should Buy, According to Experts

The prices listed here are accurate as of publication on 4/1/22.

Jigsaw vs. Reciprocating Saw: Which Cutting Tool is Best for Your...
Advertisement

The Best Metal-Cutting Saws of 2022

The Best Miter Saws Tested in 2022

The First Power Saw New DIYers Should Buy, According to Experts

6 Things to Know Before Cutting Metal