Discover when to use a miter saw and when a circular saw is the better option, and find out the key differences between these tools. 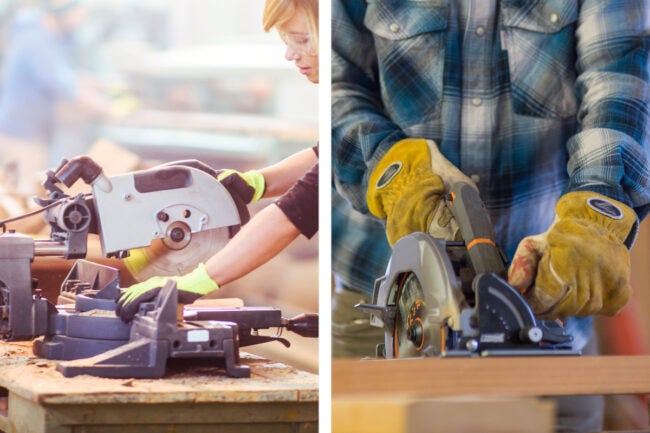 Miter saw vs. circular saw is a comparison that many DIYers consider while working on home renovation projects, because it’s easier to keep working with the saw that’s out already instead of switching to a different saw. However, there are also circumstances in which using a miter saw or circular saw for a cut can actually detract from your work and make it more difficult to cut material and achieve excellent results.

All DIYers using these tools, regardless of experience, need to also have a firm understanding of circular saw and miter saw safety and personal protective equipment (PPE) needs. The PPE for operating these tools includes safety glasses, hearing protection, and a dust mask.

Continue reading to discover the important factors in the circular saw vs. miter saw debate so you always know when to use which saw, as well the types of projects at which each tool excels.

RELATED: Jigsaw vs. Reciprocating Saw: Which Cutting Tool is Best for Your Project?

What is a miter saw?

To learn the differences between miter saws and circular saws, it’s necessary to have a firm idea of what a miter saw is and what it looks like. Miter saws consist of a stationary base and a hinged saw that lifts up vertically away from the base on a large arm. The saw blade is round, and it’s typically used to make crosscuts and miter cuts in wood, plastic, or even metal, depending on the equipped blade.

The target material is lined up on the base of the saw against a metal barrier commonly referred to as a fence. The fence helps to keep the material straight and in place while the user grips the handle on the saw arm and holds the trigger down to activate the blade. By lowering the spinning blade to the material, the miter saw cuts clean through wooden beams, plastic pipe, and metal corner round.

Our Recommendation: BOSCH Power Tools Sliding Miter Saw on Amazon for $649.
The sliding miter saw is equipped with a powerful 15-amp motor, and it features sliding rails that help the user cut a board up to 16 inches wide.

What is a circular saw?

While a miter saw consists of a base, arm, and vertical saw blade that cannot be used without a sturdy surface for the base to sit, a circular saw is a handheld tool that relies primarily on the user for accuracy.

This type of saw also has a circular blade and can be used on wood, plastic, or metal, but because the tool needs to be held and directed through the material, it can be less accurate than a miter saw. To use the tool, just grip the handle located on top of the tool and line up the saw blade to cut into the desired material.

Make sure the material is placed on a flat, firm surface that can support the weight while you work, then squeeze the trigger to activate the saw blade. Gradually move the saw blade into the material, continuing to apply pressure in the desired direction.

If you are making a straight cut through a sheet of plywood, continue to apply forward force to move the tool smoothly through the wood. However, if you want to make curved cuts, then you will need to apply pressure to turn the saw as it cuts. These types of freehand cuts are not possible with a miter saw.

Similar to a miter saw, circular saws come in several types. These include sidewinder, worm drive, and compact circular saws.

Our Recommendation: Craftsman 15-Amp Circular Saw on Amazon for $71.98.
With a magnesium shoe that can bevel up to 55 degrees and a 15-amp motor allowing the saw to run at up to 5,500 rpm, this Craftsman circular saw is a great option for new and experienced DIYers.

Circular saws excel at cutting sheet goods, whereas miter saws are limited to cutting boards of a certain width.

Similarly, a miter saw is limited by the size of the blade and the size of the cutting table, so you cannot use a miter saw to cut through larger pieces of material, like a plywood sheet. However, a circular saw is designed with the flexibility to cut through small 2x4s, wooden beams, plywood sheets, large boards, and more. Just make sure to pay attention while you are cutting because circular saws are prone to kickback if the blade jams or hits a hard object, like a nail or screw.

If you aren’t concerned about making rounded cuts or working with larger material, then miter saws may be the best option since they are incredibly accurate. Simply adjust the base to the left or right in order to determine the angle of a crosscut. Tilt the saw blade and lock it in place to make a bevel cut. Slide the arm out from the saw before bringing it down to cut wider material.

Once you set the miter saw to make a specific cut, you can keep these settings locked in place so that it’s easy to make identical cuts in multiple pieces of material. This makes them better for projects that require making many identical cuts, like when building a deck or fence. While a circular saw may be able to make the same cut, the accuracy is left to the user, and most humans don’t tend to function as flawlessly as the average miter saw when it comes to accurate cuts.

Circular saws can make a wider variety of cuts than miter saws.

Despite the differences in accuracy, circular saws are actually designed to make a wide range of cuts that surpass the abilities of a miter saw. They can make crosscuts across a board, rip cuts along the length of a board, and bevel cuts by adjusting the angle of the footplate or shoe. Users can also adjust the depth of the cut and control the exact shape of the cut by simply directing the saw through the material in the desired shape.

The flexibility of this tool also allows users to use it for plunge cuts in the middle of material, and it’s effective on wood, plastic, metal, and other comparable materials. Circular saws can be used for more creative projects that take advantage of the flexibility of the tools, like making an Adirondack chair or bench.

RELATED: 8 Handy Ways to Use a Reciprocating Saw

A miter saw takes up more workshop space than a circular saw, and circular saws are more portable.

Miter saws are often too large for smaller properties that don’t have a place to store or even set them up.

If you need a saw around the home but don’t have a garage, shed, or workshop, then it may be better to invest in a circular saw. These compact power tools are designed to be portable, so they are small enough to pick up and move around with one hand, making it easier to find a suitable place to store them.

Although you can get a circular saw for more flexible use, if you have a workshop, shed, garage, or basement with space available to set up a miter saw, then this tool is an incredibly helpful investment for frequent DIYers.

Circular saws tend to be less expensive than miter saws.

Basic models that are lacking a lot of special features, such as a built-in laser level, will be the most affordable options, but it’s recommended to look for a circular saw or miter saw with the features you may use the most while working on your future DIY projects.

The prices listed here are accurate as of publication on 4/6/22.

Jigsaw vs. Reciprocating Saw: Which Cutting Tool is Best for Your...
Advertisement

The First Power Saw New DIYers Should Buy, According to Experts

How To: Make a Mitered Corner

The Best DeWalt Miter Saws of 2022

How to Use a Circular Saw

5 Ways to Get Perfect, Clean Cuts in Plywood