Christmas vs. Thanksgiving vs. Easter Cactus: What’s the Difference Between These Holiday Houseplants?

Is your grandparents’ Christmas cactus the same as the modern department-store type? And what's the difference between those and Thanksgiving or Easter cacti? Be warned that Christmas cactus identification can be convoluted! 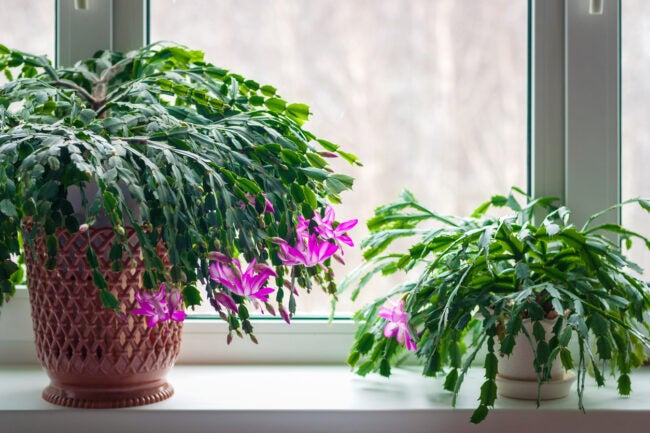 Created in 1850 from a cross between Schlumbergera truncata and Schlumbergera russelliana, the true Christmas cactus (Schlumbergera x buckleyi) is now an heirloom and seldom sold online or in stores. Fortunately, it is still preserved by gardeners passing it on.

RELATED: The Best Pots for Succulents of 2022

Thanksgiving, Christmas, and Easter cacti bloom at different times of the year.

Both Thanksgiving and Christmas cacti typically flower in mid-to-late autumn or early winter. (Although S. russelliana blooms in February or March, its crossing with the October or November-blooming S. truncata to produce the original Christmas cactus apparently resulted in a plant that flowers near Thanksgiving). Growers can bring modern cultivars into bloom around either Thanksgiving or Christmas by the regulating temperatures and hours of darkness the plants receive.

Christmas and Thanksgiving cactus flowers are tubular, while Easter cactus has star-shaped blooms.

On the traditional Christmas cactus, which combines the two species, the red and/or pink tubular flowers with pink pollen dangle like bells decorated with tiers of curving “petals”’ (actually tepals). Meanwhile, the Thanksgiving cactus offers flowers in a wider range of colors, including yellow, white, and purple, as well as red and pink. Held horizontally on the plant, with their tiers of tepals swept back, they produce yellow pollen. The flowers of the Easter or spring cactus usually are red or pink with yellow pollen, but they have a more star-like appearance than those of other holiday cacti. The number of points on those stars varies.

To help with holiday cactus identification, compare the flower shapes in the above image (from left to right: Christmas, Thanksgiving, and Easter cactus).

RELATED: Beyond Poinsettias: 23 Stunning Houseplants That Thrive in Winter

Thanksgiving cactus stem segments have sharp projections, whereas Christmas and Easter ones are more rounded.

Native to Brazilian rainforests, the holiday houseplant cacti grow on trees there without the benefit of soil. That explains why they need constant light moisture but rot easily if kept too soggy. Rather than actual leaves, these succulent plants have flat and segmented stems called phylloclades.

Both Thanksgiving and Christmas cactus are cued to set buds after daylight hours decrease in autumn. They need at least 6 weeks’ worth of 13- to 14-hour nights to bloom.

Plants that contain the most S. truncata (Thanksgiving cactus) lineage tend to bloom a bit earlier than those heavily crossed with S. russelliana. The Easter cactus requires a more extended period of long nights—usually 2 to 3 months of them—to set buds, which is why it usually doesn’t bloom until considerably later than the other two holiday cactus houseplants.

Fortunately, Christmas cactus care, Thanksgiving cactus care, and Easter cactus care are all similar. Give the plants bright, indirect light and damp, fast-draining soil such as a combination of cactus mix and orchid bark. Fertilize these succulents only during spring and summer, keeping them in a protected location if outdoors, such as under a porch roof or tall tree, where they can be left out long enough to experience shortening days and cooling temperatures in autumn (but only until temperatures drop into the 40-to-50 degrees Fahrenheit range—no lower).

After you bring them indoors, reduce their watering and place them where they receive 13 to 14 hours of complete darkness every night for 6 weeks—2 months for Easter cactus—with daytime temperatures between 65 and 70 degrees and nighttime ones between 55 and 60 degrees.

Then, shift them to where you want them to stay and resume their regular watering schedule. Avoid moving your holiday plants after their buds form, or they may fall off.

RELATED: The Best Soils for Succulents of 2022

Easter Cactus Care: How to Get Your Holiday Succulent to Flower E...