Cricket vs. Grasshopper: Which Noisy Pest Is Invading Your Home or Garden?

Learn more about what differentiates these insects, so you can deal with whichever one is keeping you up at night. 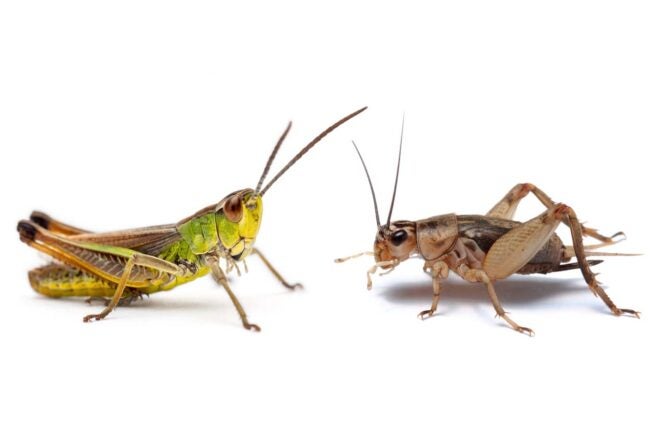 If you have a pest living in your garage, basement, or garden and can’t tell if it’s a brown cricket or a brown grasshopper, continue reading. The sections below will delve into the key cricket vs. grasshopper differences to help you distinguish between these insects.

For the most part, grasshoppers have a larger body size than crickets, but crickets have longer antennae.

Generally speaking, most grasshoppers have longer bodies than crickets. Depending on the species, grasshoppers can grow up to 4 or more inches in length. Most crickets, on the other hand, typically have a body length under 2 inches.

RELATED: The Spotted Lanternfly is Spreading—Here’s How to Combat the Invasive Pest

Both insects stridulate (or chirp), but in different ways and at different times.

RELATED: 10 Bugs That Invade Your Space Every Fall

The life cycles of crickets and grasshoppers are also different. When crickets mate in the spring and early summer, the females can lay up to 100 eggs. The eggs are laid in soil and hatch after about 2 weeks. When a newborn cricket hatches, it is in the nymph stage. A cricket nymph looks similar to an adult, but it isn’t fully formed until its exoskeleton molts 10 times. If young crickets can evade predators and other challenges, they typically live for about 2 months.

Grasshopper mating season is in the late summer. After mating, female grasshoppers deposit approximately 10 egg pods, each with up to 300 eggs. Grasshopper eggs incubate until the following spring. Young nymph grasshoppers look much like adult grasshoppers, but they do not have any wings yet.

Grasshopper nymphs molt up to 10 times during the first few weeks of their life, and each will be a fully-formed adult with wings by the end of the first month. A grasshopper can live up to 1 year.

Crickets are omnivores, whereas grasshoppers are herbivores.

Another main grasshopper vs. cricket difference relates to each insect’s diet. Crickets are omnivores, meaning they eat a mix of plants and animals. Some of the types of food a cricket may eat include larvae, aphids, grass, seeds, flowers, vegetables, or fruit. Crickets may even eat grasshoppers or their eggs.

Most grasshoppers are generally herbivores, which means they only eat plants. A grasshopper’s diet often consists of flowers, seeds, stems, and leaves. However, in some cases, grasshoppers may eat spiders, snails, worms, or other invertebrates. Lizards or snakes may even be eaten by grasshoppers on rare occasions. Contrary to “A Bug’s Life,” grasshoppers are quite self-sufficient and do not rely on (or steal from) ants for food.

Both insects can be destructive in a home garden, but crickets are more inclined to move indoors.

Both crickets and grasshoppers can cause a lot of damage to gardens, crops and natural resources. In particularly bad years with large grasshopper infestations, it is possible for the insects to destroy 20 percent or more of an area’s crops. While they prefer alfalfa, wheat, corn, and soybeans, they can also cause damage to other crops, trees, or residential gardens when there is a very large grasshopper population.

Crickets are much more likely to enter houses than grasshoppers. They can chew holes in clothing, furniture, flooring, and baseboards. While crickets are not typically aggressive toward humans, they may bite out of self-defense, but their jaws aren’t normally strong enough to break the skin.

While some say that having crickets inside can bring good fortune to your home, most want to know how to get rid of the insects to prevent damage or an infestation.

Once you clear up crickets in your home, you can take steps to prevent them from entering. Sealing cracks in the foundation and ensuring there are no gaps around your doors can help. You should also work to keep weeds and long grass away from your home’s exterior and make sure firewood isn’t left right up against the house.

RELATED: Solved! What Are These Tiny Red Bugs in My Home?

10 Plants Sure to Stop Deer in Their Tracks

Gopher vs. Groundhog: Which Burrowing Critter Is Invading Your La...

Quackgrass vs. Crabgrass: Which Notorious Weed Is Invading Your L...

Vole vs. Mole: How to Tell Which Pest is Tunneling Through Your Y...

8 Red Flags to Look For in a Real Estate Listing