Everything You Need to Know About the Great Cicada Emergence

Let this once-in-a-generation natural phenomenon inspire wonder instead of worry. 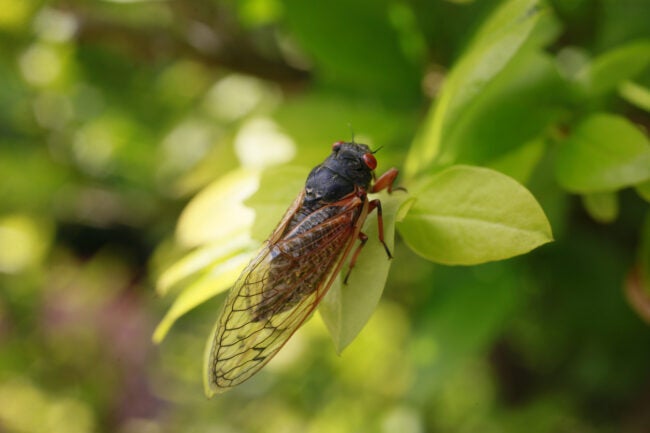 Ever notice when something notable happens in the environment it is hyped to garner public interest? Typical headlines employ creative names to grab attention, and to help explain the event. A full moon that aligns with perigee, or the moon’s closest position to earth in its elliptical orbit, is called a supermoon. A big flood that has a statistical 1 percent chance of happening in any given year is called a “hundred year flood,” or “flood of the century.”

When the phenomena relate to insects, it’s a sure trigger for fear. The Washington Post in a recent article leads with the statement, “They’ve been buried—alive—for 17 years. And now, Brood X, one of the world’s largest swarms of giant fly-like bugs called cicadas, is ready to rise.”

Sometimes we can’t help but let our imaginations run wild, but there’s no reason to think of the periodic cicada emergence as anything more or less than an amazing part of nature. If you’re worried about what will happen as these big, harmless bugs come out of the ground, keep reading.

Related: Assassin Bug—The Kind of Insect You Want in Your Garden

Cicadas include about 3,000 species of large, stout, oval, winged insects. The current craze is specific to the seven species of periodical cicadas, all found in eastern North America. The term “periodical” refers to the cyclical emergence of mature adults that occurs every 13 or 17 years.

Adult cicadas feed on trees and shrubs by piercing the tender bark and sucking out sap. Females make tiny holes in twigs to lay hundreds of eggs. Ten weeks later, when the eggs hatch, the nymphs fall to the ground and immediately burrow down to spend the next several years feeding on roots and growing to adulthood.

Three of the periodical cicada species have 17-year emergence cycles. The other four species have 13-year cycles. The life cycle for each particular species is locally synchronized. Each heavy, localized emergence is known as a brood. Fifteen broods are tracked around the country, including this year’s Brood X.

The Brood X emergence will only affect localized areas.

All three of the 17-year cicada species are represented as part of the Brood X emergence. But the brood will not emerge everywhere. This map from the U.S. Forest Service shows the hot spots, mostly in Maryland, Pennsylvania, Delaware, Indiana, Illinois, Tennessee and Georgia. Some of these locations will see the emergence of multiple broods this year. Other areas will see only annual cicadas, as they do every summer.

It will be loud, but not that loud.

Only about half of the cicadas that emerge make the loud buzzing sound. That sound is the males trying to attract females. It has been estimated that the peak noise level of the periodical cicada emergence can reach 100 decibels. For comparison, that matches up to the noise of a lawn mower. Impressive for a bunch of bugs, but not intolerable. For the most part, we spend our lives surrounded by noise, so hearing a lawnmower-like noise outside shouldn’t be a big problem. It could be bothersome if you go tent camping this summer, so bring your earplugs.

Related: The Best Earplugs for Sleeping and Blocking Out Noise

It will be messy, but not that messy.

In addition to mating and making noise, the other activity that makes cicadas so well known is their molt. After emerging from the ground as a final stage nymph, they climb a vertical surface and shed their exoskeletons. Soon afterward their adult “skin” hardens, their wings inflate, and they fly away. What’s left is a near perfect silhouette cast in chitin. The shed material isn’t nearly as messy as some other insect molts that blow and drift in the wind. Cicada shells mostly cling in place on the sides of trees until curious kids and adults pull them off to say “hey, look at this!”

Nature’s processes are subtle and interwoven, with each element and creature playing a unique role. The cicadas plays several roles in forest ecology. In the nymph stage, they move around beneath the soil feeding on tree roots. In doing so they aerate compacted soil, allowing deeper root and rain penetration. As adults they prune branches, allowing more sunlight to reach the seedlings on the forest floor. The combined effect of root and branch pruning on individual mature trees is negligible, but the value of added sunlight to young seedlings is immeasurable.

The heavy emergence also serves as a protein feast for bug-eating birds, rodents, bats, insects, fish, reptiles, and amphibians. Some of these animals even change their normal dietary habits to take advantage of the bounty.

Cicadas are big, loud, and a little bit messy. It’s no wonder some people get a little creeped out by them. But they don’t bite or sting, and in fact they are harmless to humans. Although sick and weak trees may be damaged by their feeding habits, overall cicadas do far more good than harm to the forest. Plus they feed countless predator species throughout their once-in-a-generation emergence cycle. So don’t worry about Brood X. Just sit back and appreciate the wonders of nature, even if you have to wear ear plugs.

How to Get Rid of Cicadas
Advertisement

10 Chandeliers You Can Actually Afford

America's 20 Most Burglarized Towns and Cities