11 Christmas Plants That Will Enliven Your Holiday Decor

Include nature in your holidays by decorating with live Christmas plants. Fresh and fragrant flowers and foliage offer a welcoming natural element and picturesque focal point to your holiday design. 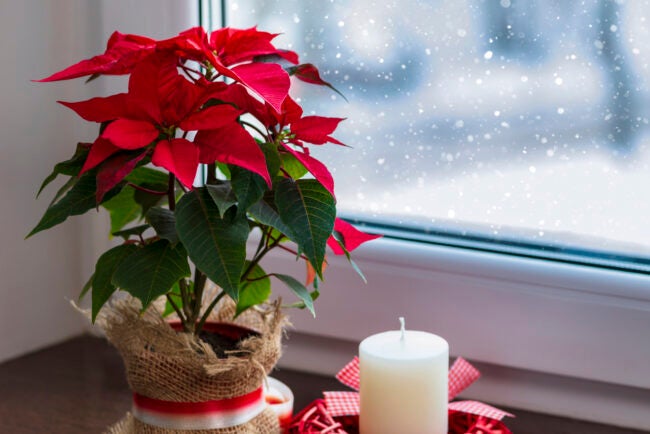 Christmas is a time of traditions, nostalgia, gatherings of family and friends, decorating, gifts, and good times. With winter in the northern hemisphere during the Christmas holidays, many are left yearning for the greenery of warmer days. Because of their easy indoor color, Christmas plants are popular traditional gifts that double as seasonal decor.

Around the world, the festive blooms of plants associated with Christmas add seasonal joy that can often last long after the festivities are over. There are many holiday plants from which to choose, from traditional Christmas flowers to evergreens. Here are 11 popular Christmas plants to spruce up your home over the winter.

RELATED: The Dos and Don’ts of Poinsettia Care

The poinsettia is commonly considered the official flower of Christmas because of the folklore surrounding it. This Mexican native is also known as “la flor de Nochebuena,” or the flower of the holy night. The name is thanks to its resemblance to the Star of Bethlehem, and the poinsettia represents December and Christmas perhaps better than any other plant.

Technically a flowering shrub that can grow 10 to 15 feet tall, the potted poinsettia reaches about a foot high and features bright scarlet bracts and green leaves with tiny green or yellow flowers nestling in the center. This red Christmas plant likes bright light but not direct sun and moist (but not wet) soil. It’s possible to save a poinsettia for next year, but it will rebloom only under the right conditions. The plant’s milky sap can be mildly toxic to children and pets.

In its native Brazil, the tropical Christmas cactus grows wild in rainforests, producing blooms of pink, red, purple, white, yellow, or orange. It features small, flat stem segments with smooth edges that distinguish it from Thanksgiving cactus, which has toothed edges on its stems. Tube-shaped double flowers appear at the end of these stems, with shorter outer petals curling back to reveal longer inner petals with delicate stamens.

To encourage Christmas cactus blooms the next season, they require a resting period in February to March, during which they require less water. They should receive at least 12 hours of darkness each day in the fall until flower buds appear.

One of the most popular Christmas gift plants is the amaryllis, perhaps because it’s easy to give in bulb form. Clusters of large trumpet-shaped flowers of red, white, pink, salmon, or red-and-white stripes top tall stalks up to 24 inches tall, flanked by strap-like leaves. They typically bloom for up to 7 weeks, producing flowers for Christmas and the holiday season. Water sparingly at first, but more often as stems develop. After flowering, this tropical Central American native can be stored in a cool, dark place for reblooming the next holiday season.

This shade-loving evergreen climber is among outdoor Christmas plants that can adorn a home’s exterior. Common ivy’s trailing tendrils are frequently used in wreaths and garlands because of their flexibility and their attractive offset three- or five-point green leaves reminiscent of the bird footprint patterns. The cut ivy will last about 3 weeks.

This member of the ginseng family has been used since pagan times, symbolizing faithfulness and friendship. Other forms of ivy are often included in festive container gardens, such as placing variegated ivy foliage near poinsettia to highlight the red bracts.

These perennial bulbs are often forced to bloom as Christmas indoor plants, requiring just a little soil or a bowl filled with water and pebbles. They need to be started 5 to 6 weeks before the desired blooming period, but once the pure white flowers appear on tall stems, they can last 2 to 3 weeks. While blooming, paperwhites emit a strong fragrance. A relative of the daffodil, they can be grown outdoors in Zones 8 to 11, but are rarely forced for indoor blooms a second time.

Originally a symbol of the Roman festival of Saturnalia, today’s holly represents the iconic Christmas leaves of spiky, glossy green, punctuated with tiny bright red berries (on the female plant only). More than 400 species of holly grow around the world, and American holly bushes are commonly associated with Christmas. Native to swampy marginal regions of eastern and central U.S. states, holly is an evergreen that grows in pyramidal form, reaching up to 30 feet tall and 20 feet wide. Despite being mildly toxic to people and pets, its shiny, prickly leaves and magenta berries are often used in wreaths and garlands.

A relative of the monkey puzzle tree, this subtropical plant looks enough like a Christmas tree plant to be favored during the holidays. Its straight trunk grows as tall as 8 feet indoors and supports symmetrical branches with soft, inward-curving needles that are perfect for hanging Christmas ornaments. After the holidays, discard the ornaments and keep the pine in full sun away from drafts as a beautiful houseplant. It requires weekly misting and regular watering to flourish. If needles turn brown, it’s either getting too much or too little water or it’s cold.

A small plant, growing up to a foot high and wide, this easy-care houseplant is sensitive to overwatering and underwatering. It also prefers cooler temperatures and plenty of indirect sunlight. This perennial goes dormant after blooming, but can rebloom a few months later with proper care.

Just as potted mums signal autumn, small potted evergreen azaleas have been adopted as a Christmas flower. With vibrant blooms in white, pink, lavender, red, orange, and other colors, they put on a showy display for up to four weeks. There are more than 10,000 registered cultivars, each with a unique number of blooms and petal shape. Some are fragrant. They like bright light, moist soil, and cooler temperatures, so they’re best kept away from heat registers. Care should be taken, as they are toxic to pets and people if consumed. After blooming, they can be planted outside, but are difficult to force to rebloom indoors.

A conifer is a real Christmas tree, and the term covers the broad range of trees that bear seeds in cones. Most conifers keep their needles year-round, so they often are called evergreens. An ancient group of plants, there are more than 600 species of conifers—many of which are used as traditional Christmas trees.

Although many people cut down evergreens for Christmas only, it’s possible to keep a living Christmas tree in the house for the holidays, but only for about 10 days and as long as it gets plenty of sun and adequate water. After the holidays, it should be planted outdoors and not brought back inside.

A nontraditional but elegant Christmas plant is the orchid. Of the numerous orchid genera, the Cymbidium makes a good choice because it blooms naturally in the winter, preferring cooler temperatures. Large flowers of white, pink, yellow, or green bloom on plants that reach about 2 feet tall and feature apple-green-colored foliage.

These orchids prefer bright, indirect light, cool or cold temperatures, plenty of water during the growing season, a loose and rich potting mix, and high humidity. Blooms last 4 to 10 weeks on the plant, or 1 to 4 weeks if cut. To encourage reblooming next year, they need indirect light and temperatures between 40 and 65 degrees Fahrenheit.

RELATED: Christmas vs. Thanksgiving vs. Easter Cactus: What’s the Difference Between These Holiday Houseplants?

Move Over Poinsettias—Succulent Christmas Trees Are the New Go-To...

The 9 Best Lighting Picks for Your Bedroom

10 Chandeliers You Can Actually Afford

10 Good Things Your Town May Give You for Free

The Best Things You Can Do for Your Lawn

13 Unusual Ways to Use What's in Your Spice Rack