Orchids are not hard to grow. You just need more information. 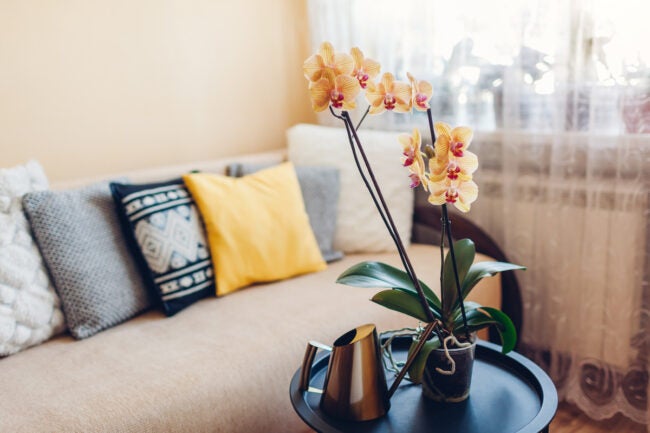 Orchids have a reputation. Their presence in a room promotes a sense of calm and adds an exotic touch to the decor. However, gardeners and plant lovers often see them as finicky, needy, or just plain difficult to grow.

It’s true that taking care of orchids requires unique growing requirements that must be met so your plants will grow, bloom, and thrive. But once the secrets to orchid care are revealed, these exotic beauties are no more difficult to cultivate than other houseplants.

Orchid Care At a Glance

Orchid plants are flowering plants from the Orchidaceae family. Represented by about 28,000 species throughout the world, it’s one of the largest and most diverse flowering plant families. Orchids may be terrestrial (grow in soil), epiphytic (grow on trees and shrubs), lithophytic (grow on rocks), or aquatic. They are native to habitats as diverse as moist tropical forests, arid semi-desert regions, and tundra. Their sunlight, water, temperature, and humidity needs vary greatly.

The defining characteristic that makes an orchid an orchid is the flower. Orchids have three flower petals and three sepals. Also, the male and female flower parts—the stamen and the pistil—are fused into a single structure called the column. Finally, orchids have a single lip that extends at the base of the flower, called a labellum. This unique flower structure is the trait that all orchids share, and that separates this botanical family from all others.

The vast majority of orchids that are available at stores are epiphytes from tropical or subtropical forests, although a few terrestrial species are common as well. They share similar environmental preferences, and we typically grow them as houseplants.

Below are several of the most common orchid genera. To get the most accurate and detailed care information be sure to identify your orchid and look it up by genus and, if possible, species.

Orchid culture starts with choosing the right orchid soil. But epiphytic plants can cause a bit of confusion. They don’t grow in soil, instead clinging to tree bark or growing in accumulated organic matter in the crotch of a branch. The solution comes in the form of either orchid bark or orchid potting mix, both of which are designed to absorb and retain moisture in their chunky yet porous texture.

For other types of orchids, you might find better success with orchid bark (available on Amazon). Orchid bark is simply chunks of fir bark that is graded by size. Medium or coarse orchid bark is an excellent choice for most epiphytes. Before repotting your orchid seedling or plant into bark, soak the bark in water until it is saturated and then let it drain.

Related: 8 Plants You Can Grow Without Soil

Light is the most critical factor in getting orchids to bloom, and they do not like direct sunlight. A good starting point for any orchid type is bright but indirect sunlight, such as near a window but behind curtains that allow some light to penetrate. But some kinds of orchids prefer higher light and others perform best with less.

North, east, northeast, and northwest windows provide low to medium light exposure. This is ideal for phalaenopsis, paphiopedilum, and other orchids that grow in more shade. South, west, southwest, or southeast facing windows allow more sunlight in, which is better for dendrobiums, cattleyas, and other canopy-dwelling epiphytes.

Orchids absorb moisture from the growing media and from the humidity in the air. The growing medium will dry out faster in lower humidity. With several variables to consider, proper watering is a critical skill for orchid-growing success. For most orchids in most homes, weekly watering should suffice. When it’s dry, soak the container in a bowl of water and allow the bark to rehydrate.

The size of the container, type and condition of the growing medium, climate, and the type of orchid help to determine watering frequency. A 6-inch pot might need only weekly watering, while a 4-inch pot might need water every 5 days. Look at the condition of the orchid bark or orchid mix. If it is dry, the color lightens. Feel the weight of the container before and after watering. A lightweight pot is a good indicator that the medium is dry.

Orchids are nutrient scavengers that thrive in lean growing conditions. They don’t need much plant food, but they do need some. The easiest way to feed them is by mixing a liquid general purpose plant food at quarter strength, and applying it every other week as part of the weekly watering. On feeding weeks, the orchid bark or mix will absorb nutrients for the plant to use. On nonfeeding weeks, the clear water will rinse away any nutrient salt buildup.

Orchids need at least 50 percent relative humidity to thrive, which is slightly higher than the humidity of the average home. One way to boost the ambient moisture is to grow plants in groups, rather than individually. The close proximity of several pots with moist soil and transpiring plants will create a microclimate that works better for all tropicals. Another option is to grow your orchids in a bathroom or kitchen, both of which tend to have higher humidity than other rooms in the home.

If you have one healthy orchid, you can get more for free by propagation. Depending on the type of orchid, division, back bulbs, or offshoots could be the best option.

When an orchid grows too large for the pot in which it is growing, you can divide it. Sympodial orchids such as cattleya, cymbidium, dendrobium, and oncidium are the best candidates for division. These types grow from lateral rhizomes that can simply be cut into short sections to separate individual pseudobulbs when they become too large. Each pseudobulb can then be potted up into its own container.

An orchid root with an inactive eye but no active lead is called a back bulb. Large plants might have numerous pseudobulbs (active leads), and back bulbs, each of which could become its own plant. To propagate from a backbulb, cut halfway through the rhizome and wait until the back bulb’s eye begins to swell. Then remove it, separate it from the pseudobulb, and pot each into its own container.

Orchid keikis, or offshoots, are baby plants that form along the main stem of a parent orchid. Some of the varieties that produce these offshoots include dendrobiums, phalaenopsis, and oncidiums. Simply allow the keiki to mature on the parent plant before removing and potting it up to grow on its own.

Orchids are some of the safest plants you can grow. They are nontoxic to humans and animals, and they are low allergen producers. Everyone’s body chemistry is different, and some individuals might be sensitive to them, but overall, orchids are a safe bet.

Overwatering can lead to serious fungal problems that could kill the plant. Insects such as aphids, mealybugs, scale, spider mites, or thrips may infest the plant if it becomes stressed. Identify pests and treat the plant with an insecticide or natural pest control product rated for that pest.

Related: 20 Flowering Houseplants That Will Add Beauty to Your Home

In case you were wondering, here are a few fun FAQs about orchids and orchid culture.

Q. What is the lifespan of an orchid?

An orchid that is well cared for could outlive its owner. Some species may live 100 years or longer.

Orchids may remain dormant for 6 to 9 months. A dormant orchid is one that has finished blooming and has a bloom stalk that has turned brown. During this time the foliage might remain green and vibrant. Feed it regularly to ensure it has the resources necessary for reblooming when it is ready.

Q. What do I do with an orchid after the flowers fall off?

Q. Do I still need to water orchids after flowering?

When the orchid stops flowering, continue watering the plant. Be sure to let it dry out a bit between waterings. You might need to adjust watering frequency if the growing climate has changed.

The 12 Biggest Houseplant Trends for 2023
Advertisement

This Shamrock Plant Care Routine Will Reward You With Summer Bloo...