Follow these tips for great-looking stag plants with gorgeous foliage. 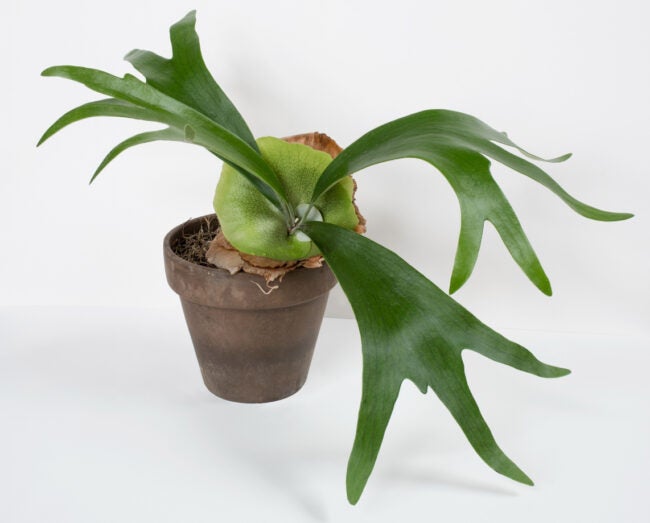 Nothing wakes up a room quite like a beautiful staghorn fern plaque. These unique foliage plants can anchor an air plant collection, accent orchids, or make a bold statement as a focal point. The strikingly lobed foliage with its stiff, somewhat felted texture looks like something from another planet or from under the sea, yet it happily makes its home in tropical forest canopies. It’s quite the conversation piece.

Yet these plants are not unlike other epiphytes (plants that get structural support from other plants but don’t harm them) and ferns. They are truly exotic, but they aren’t difficult to grow. Just ahead, learn the basics of staghorn fern care. You might be surprised at how easy they are to grow.

Related: These Are the Most Popular Houseplants in America

Staghorn Fern Care at a Glance

Staghorn fern is the generic name for any of 18 fern species in the Platycerium genus. The botanical name is derived from the Greek “platys,” which means “broad,” and “keras,” meaning “horn.” Most are native to Australia, the South Pacific, and Southeast Asia, but a few grow in tropical Africa, Madagascar, and South America as well. The species that Westerners are most familiar with is P. bifurcatum, which is sometimes called Elkhorn fern.

Staghorn ferns, occasionally referred to as “stag head fern,” are so called for their resemblance to antlers. The stag plant is typically mounted to a wooden plaque and displayed by hanging on a wall. The plants grow best in warm, humid conditions, indoors or out.

In the wild, these ferns are either epiphytes (they grow on trees), or lithophytes (they grow on rocks). They attach to tree bark via tufted roots that grow from a rhizome. Shield- or kidney-shaped basal fronds growing from the rhizome laminate against the tree, protecting the fern’s roots from damage and drying out. Fertile fronds jut out from the base, taking on the characteristic antler-like appearance and bearing spores on their lower surface.

As epiphytes, staghorn ferns prefer a coarse, well-draining growing medium that is high in organic matter. Instead of growing them as potted plants, most growers mount them on wood planks, or plaques. Cedar makes an excellent staghorn fern mounting board because it is naturally rot resistant. The medium of choice is dried sphagnum moss.

To mount the stag plant on wood, start with a mature fern and a plaque with four or five mounting screws secured on the front. Gently remove the fern from its pot and break up the bottom third of the root ball. Place the plant in the center of the plaque with the antler fronds oriented toward the top.

Dampen some sphagnum moss and wrap it across the root ball to cover exposed soil and roots. Secure the wrapped root ball to the mounting screws with twine.

Like most popular indoor plants, staghorn ferns need bright, indirect sunlight. A good location might be a room with east-, south-, or west-facing windows. Just be sure to protect the plant from direct sunlight, either by shielding it with sheer curtains or by placing it on the opposite side of the room from the windows.

In a north-facing room, it can sit very near the window. To test the light level, hold your hand over the spot where the plant will sit. If your hand casts a shadow, the lighting is adequate.

Weekly watering is generally adequate for staghorn ferns during summer and every 2 to 3 weeks in winter. This could change with the potting medium, temperature, and humidity of the room, among other factors, so adjust as needed.

Mist the foliage regularly to boost humidity. Stags actually absorb water through their fronds, so mist will extend the time between waterings. When you water, soak the root ball thoroughly. Place potted plants in a bowl of water and let them soak for 15 minutes or so. Place plaques in a sink and run water over the root ball until it is well soaked. Allow plants to drain thoroughly before returning them to their homes.

If staghorn fern brown leaves are a problem, it is probably a watering issue. Stag plants are sensitive to both overwatering and under-watering. When fronds begin to turn dark at the base, it’s a symptom of overwatering. Brown frond tips and wilting are signs of under-watering.

There is no need to look for a specialized staghorn fern fertilizer. Stags thrive on weak applications of general-purpose liquid plant food during the growing season. Do not fertilize in winter.

Staghorn ferns grow well in average home temperatures between 60 and 80 degrees. During temperate summers, they appreciate the heat and humidity outdoors, but be sure to avoid direct sunlight. Move them back inside when night temperatures drop into the 50s.

High humidity is vital for good staghorn plant health. Keep the plant away from heat vents, fireplaces, and other arid zones. Mist the fronds daily to boost the ambient humidity. If the fronds begin to brown at the tips, but the root ball is still moist, mist more frequently. Consider moving the plant to a bathroom, or even the shower, for a humidity boost.

Related: This is the Ultimate IKEA Hack for Plant Parents

If you have a mature staghorn fern, you might be able to grow additional plants from it. Staghorn ferns are typically propagated by spores or by division of pups.

Spores are the equivalent of tiny seeds that grow on the undersides of fern fronds. They can be harvested and started in sterilized seed starting mix. There are several ways to do it, but all are somewhat complicated and it takes at least a year before the baby plants are large enough to transplant.

Mature stags may produce pups near their base. Pups are baby plants that grow from the same rhizome as the parent plant. Closely examine the soil area around and between the basal fronds of mature plants. If you find smaller, developing plants, you can carefully separate them to pot up. For a strong staghorn fern colony, thin the pups to allow 3 inches of space between plants.

Staghorn ferns are considered safe plants to grow around children and pets; they exhibit no toxicity to humans, dogs, or cats. They do not flower, so pollen is not a problem. Some individuals might be sensitive to mature spores, which could cause an allergy flare-up.

Stags are resilient plants that exhibit almost no pest or disease problems. If the plant is stressed, typically due to overwatering or under-watering, scale insects could infest a staghorn fern. Also, overwatering can cause root rot. Providing a combination of adequate lighting, temperature, humidity, and water is the best way to avoid these problems.

Inquisitive gardeners want all the information available. Following are some of the most frequently asked questions about growing staghorn ferns.

In their natural habitat, staghorns are epiphytes that grow on the sides of trees without soil. Many gardeners replicate this environment by mounting them on wood plaques.

Staghorn ferns can grow in pots, but they should not be planted in mineral soil. Instead, use a well-draining planting medium made primarily of organic matter. A 50/50 mixture of orchid bark and cactus potting mix is appropriate.

Q. How do I plant a staghorn fern?

Young plants can grow in pots filled with a mixture of orchid bark and cactus potting mix. Mature plants grow well when mounted on cedar plaques, with their roots covered in moistened sphagnum moss.

In limited amounts, coffee grounds can help boost soil acidity and organic content of the growing media. But they should not be viewed as a replacement for either proper fertilization or an appropriate planting mix.

As with coffee grounds, banana peels may add trace nutrients that staghorn ferns can use, but they cannot replace proper fertilization. Plus, banana peels will attract fruit flies as they decay.

Maidenhair Fern Care: How to Master This Humidity-Loving Houseplant
Advertisement

Everywhere Ferns: Choosing the Right Variety for Your Garden

The 8 Worst Houseplants for People with Allergies