Despite its common name, dumb cane can be a smart choice for a houseplant. One of the “best dressed” foliage plants, it thrives in even moderately bright light. 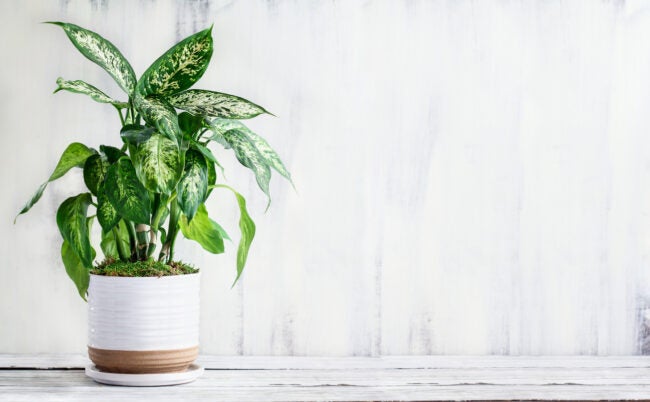 Consumption of dumb cane leaves can cause swelling of the tongue and throat, which conceivably could cause suffocation, so this plant isn’t the best choice for gardeners with young children or pets. However, most others find it to be an intelligent addition to their indoor decor, since dumb cane care is easy, and the plant doesn’t require high light levels to thrive. Just don’t make a salad out of it!

Dumb Cane Care At a Glance

Native to Central America, South America, and the West Indies and hardy in USDA zones 10 through 12, dumb cane can grow outdoors there in partial shade or bright shade. Under such conditions, it can reach 10 feet or more in height and produce calla-like green or greenish-white spathes containing off-white spadices on which the male and female flowers grow. Those are followed by clusters of red berries.

However, the plant seldom blooms indoors, where dumb cane houseplant care generally focuses on the plants’ foliage. It consists of large, oblong leaves, carried on cane-like stalks and usually speckled, spattered, or splotched with white or yellow variegation. In a pot, the plant’s height can vary from 1 foot for dwarf cultivars and up to 8 feet for taller types.

Related: 7 Instagrammers Whose Houseplants Have a Cult Following

A typical indoor plant potting mix with a pH of 6 to 6.5 works well for dumb cane, or you can combine two parts peat moss with one part of pine bark fines (screened and partially composted pine bark) and one part of perlite. To determine soil pH, you’ll need to purchase a viable meter like this pH tester—a favorite in our researched guide to the best pH meters.

Avoid any pot that has no drainage holes or is more than a third larger than the plant’s root ball, since a too roomy or nondraining container both contribute to the sogginess that can cause root rot. As part of dumb cane plant care, you’ll probably need to repot your plant into a larger container about once every 2 years—preferably in spring.

As for dumb cane care light, the plant prefers bright or moderate indirect illumination, since actual rays can scorch its leaves—especially during the spring and summer months. If you want to place yours near a south- or west-facing window, hang a sheer curtain over that window to diffuse its light. (The morning sun from an east-facing window usually is gentle enough not to burn foliage.)

On the other hand, if the plant stops growing altogether, its location probably is too dim. White walls and/or strategically placed mirrors can increase the amount of reflected illumination it receives for better dumb cane plant care light. Since Dieffenbachia tends to lean toward that brightness, turn its pot every now and then to keep it growing straight.

For proper care of a dumb cane plant, allow water to warm to room temperature before you irrigate the soil. You can easily manage that by refilling your can after you water your plants and leaving it to sit until the next watering.

That reportedly will allow time for some of the chlorine in the water to evaporate as well. (Keep in mind, though, that if your water is sanitized with chloramine instead, the standing period will have no effect on it.)

Water your dumb cane plant whenever the surface of its soil feels dry to the touch. In winter, you may want to wait until the soil is dry an inch down—to lessen the possibility that you might cause root rot through overwatering—but don’t allow that soil to dry out completely.

Care of dumb cane plant also should involve feeding it once every 2 weeks during spring and summer with a high-nitrogen plant food at half its strength. Cut that feeding to once per month in autumn and don’t fertilize the plant at all during the winter.

If your dumb cane’s leaves begin to curl and brown along the edges, reduce the amount you are feeding it, as those signs can indicate a buildup of fertilizer salts in the soil. To wash those out, water the plant well until water oozes out of the drainage holes in the bottom of the pot. Wait 10 to 15 minutes to allow the soil to drain well before you discard the water left in the plant’s saucer.

Fortunately, for those attempting dumb cane indoor care, the plant enjoys the same temperatures as those common in households or offices—namely 65 to 80 degrees Fahrenheit. However, it resents cold air and drafts, so keep it away from exterior doors and badly insulated windows. If you prefer to keep yours in a shaded location outdoors during the summer, be sure to bring it back indoors before the temperature falls below 55 degrees.

Although it can tolerate average humidity, dumb cane prefers a higher amount. So, to keep it happy, you may want to place it in a steamy bathroom or near a kitchen sink and mist it frequently. You also can position it in a tight “huddle” with other plants where their proximity increases humidity for all, due to the water evaporating from many pots of soil.

Related: 12 Houseplants You Can Grow Successfully in the Shower

If your dumb cane grows tall and lanky, cut it back to within 6 inches of its base. It should shortly produce new plants (pups) on all sides. You either can leave those in place for a fuller look or transplant them into individual pots, being sure to retain roots with each one.

Reduce the size of the top you removed to 6 inches as well, allowing just a few leaves to remain at its tip. Then place it in a glass of water on a bright but not sunny windowsill, where it should root within a few weeks.

If you have any pieces of bare cane left, cut them into 3-inch lengths and lay them horizontally atop a pot of damp potting mix. Press them in only part way, so that the top of each “log” remains above the soil with at least one bud pointing up. Keep the soil damp until the logs root.

As mentioned above, consumption of this toxic plant can be dangerous to either humans or pets, since it causes painful swelling of the tongue and throat that reportedly could end in suffocation. It therefore should be kept out of reach of pets and toddlers. According to a Snopes report, actual fatalities caused by dumb cane are rare to nonexistent, but the panic induced by the symptoms may be traumatic in itself.

The sap also can irritate the skin or cause a burning sensation if you get it in your eyes. Therefore, when you need to prune the plant, wear plastic gloves and goggles while you are working, washing them and your pruning tools thoroughly afterward.

Dumb cane care “bugs” can involve actual insects or just signs of declining health such as droopy or brown-tipped leaves. Both of those symptoms may indicate inadequate watering, though sudden drooping not preceded by yellowing could indicate cold damage instead.

As for insects such as spider mites, thrips, and aphids, strong streams of water often can dislodge them, so try placing the plant under a lukewarm shower in your bathroom. Repeat its bath every few days until the insects appear to be gone. Always make sure that you allow your dumb cane to drain well afterward to avoid soggy soil.

Below is a quick care guide for dumb cane with commonly asked questions. In this case, most of the questions relate to preserving the health of your family, as well as the plant.

Q. Can dumb cane kill you?

Although ingestion of dumb cane theoretically can cause suffocation, a former director of the Pittsburgh Poison Center reports he has “never ever seen a fatality. . . related to Dieffenbachia.”

In NASA’s study on air-purifying plants, which involved sealed chambers rather than household conditions, dumb cane cleaned up formaldehyde and xylene, but not as effectively as some other plants.

Some cultivars of dumb cane can grow to 8 feet indoors, taller when planted in the ground outdoors.

12 Lucky Plants Worth Bringing Into Your Home

This Guide to Peperomia Care Covers Both Vining and Upright Varie...