This Pilea Care Routine will Yield (Many) a Healthy, Happy Houseplant

Trendy pilea has gained popularity on social media because it’s easy to care for and share with friends. 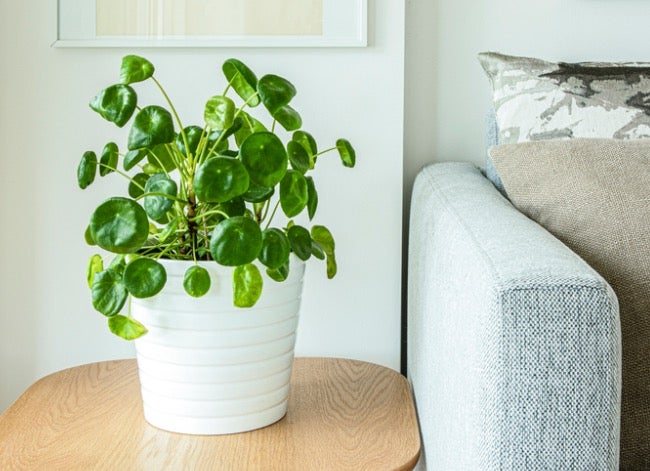 Also known as the Chinese money plant, friendship plant, or missionary plant, pilea is a perfect houseplant for beginners because of its easy care requirements. Scottish botanist George Forrest collected pileas from China in 1906, making him the first Westerner to do so. The  missionary plant name first appeared in 1945, when Norwegian missionary Agnar Espegren brought the plant back to his native country, introducing it to Scandinavia.

Still, pilea’s popularity as a houseplant is relatively new, with the first known published image of a pilea appearing in Kew magazine in 1984. Today, pileas are rarely found in the wild in their native habitat, but they have become widespread houseplant favorites. Recently, pileas have gained newfound viral fame on social media apps like Instagram and TikTok because of their unique appearance and low-maintenance ways.

Read on for everything you need to know about caring for pilea plants, including their soil, light, water, and temperature needs.

Pilea Care At a Glance

Pilea peperomioides is an evergreen perennial that’s part of the Urticaceae family and native to parts of Southern China. In nature, pileas grow in forests at altitudes of between 1,500 and 3,000 meters (about 4,900 to nearly 10,000 feet) and thrive in shady, damp areas. They feature circular, dark green leaves with diameters of up to 4 inches. The leaves have a unique appearance known among botanists as “peltate”. This means that the leaves connect to the stems in the middle of the leaf rather than the edge.

In their natural habitat, pileas grow to approximately 12 inches high while they can reach slightly taller when grown indoors. Because it never gets very big, pilea makes a great houseplant for small spaces. Though it is technically a flowering plant, the white flowers it produces are small and subtle.

There are several varieties of pilea, many of which have totally different appearances, as well as unique care requirements.

Plant pileas in organic potting soil that includes peat moss or coir fiber. Generally speaking, pileas purchased from nurseries will already be potted in high-quality soil and won’t require repotting until they outgrow their containers. Pileas require well-draining soil, and they do best in containers with plenty of drainage holes.

Unlike some other houseplants, pileas shouldn’t be planted in terra-cotta containers because the material will cause the soil to dry out too much. Repot your pilea every 12 to 18 months into a container with a diameter that is 1 to 2 inches larger than its predecessor.

Pilea peperomioides care begins with light. These mostly low-maintenance houseplants do require a specific level of light to thrive. Place them in an area that gets bright, indirect light with eastern or western exposure; direct sunlight can burn their delicate leaves. In lower-light conditions, the leaves of the pilea will darken, and it will spread more horizontally.

Pileas are becoming popular in offices because they can even survive under artificial light. If your pilea isn’t getting enough light, the color of the leaves will begin to fade. It’s best to rotate pilea plants regularly so that leaves on all sides can get equal access to their light source. If you fail to rotate it, it will grow toward the light and might begin to appear lopsided.

Water your pilea plant when the top 2 to 3 inches of soil are dry to the touch. Water deeply until the water runs through the container’s drainage holes. You’ll know it needs more water when its leaves start to droop.

Pileas can tolerate a bit of neglect and tend to bounce back even if they get no water for a week or so. Leaves turning yellow and falling off is a sign of over-watering. Because of their flat leaves, pileas tend to accumulate dust. Be sure to spray or wipe off the leaves regularly so that they can properly photosynthesize.

Like most houseplants, pileas do best if given fertilizer during their growing season, which takes place between spring and fall. During this time, fertilize the plants once per month. Use a liquid houseplant fertilizer and dilute it to half strength when adding it to water.

It’s always best to fertilize a pilea that has recently been watered rather than fertilizing a dry plant. If you notice a white crust on your pilea’s soil, it’s a sign of over-fertilizing. Skip fertilizing for a couple of months until the soil’s color goes back to normal.

Pileas require a minimum temperature of 50 degrees Fahrenheit, but do best in standard household temperatures of between 60 and 75 degrees. Keep pileas away from heating vents and air conditioning units. They can thrive in dry environments and don’t require high humidity. Still, pileas do appreciate a light misting every now and then.

Pileas are so easy to propagate that they earned the nickname “friendship plant” because they have been shared around the world through cuttings. Pileas produce small offshoots, also known as pups. Remove an offshoot by using a sharp knife to separate its roots from the primary plant. Propagate pilea offshoots or leaf cuttings.

Related: 10 Houseplants You Can Propagate the Fastest for an Ever-Expanding Indoor Garden

Pileas make a great houseplant for pet owners, because they’re considered nontoxic for both cats and dogs unless pets consume them in large quantities. They’re also not toxic to humans, so those with young children only need to worry about placing them out of reach of little ones to prevent spills.

Just like most other houseplants, pileas are susceptible to some common pests like scale, mealybugs, fungus gnats, and spider mites. Depending on the type of pest, the bugs should be removed manually by rinsing or wiping down the leaves. If you notice signs of pests, treat your pilea’s soil with neem oil or another natural insecticide.

You might notice white spots on the undersides of your pilea’s leaves. While many home gardeners may assume these are pests, they’re actually not a cause for concern. They are known as stomata, and develop from mineral residue. To prevent stomata, water your pilea with filtered water or tap water that has been left on the counter overnight.

Related: 10 Trendy Houseplants That are Safe for Pets, According to Experts

While you’ve learned more about how to care for the pilea plant, you still might have some questions about its maintenance needs. Here are some common questions and answers.

Q. How much sun does a pilea need?

Q. Is pilea an indoor plant?

Pileas are grown as indoor houseplants all around the world.

Q. How often should you water pilea?

Water your pilea plant when the top 2 to 3 inches of soil become dry to the touch.

Q. Can I keep pilea outdoors?

Pileas can survive outdoors in USDA growing zone 10 as long as temperatures never fall below 40 degrees.

The Dos and Don'ts of Watering Plants

The Best Soil for Pothos Plants of 2022

12 Lucky Plants Worth Bringing Into Your Home

The Best Soil for Money Trees of 2022