Spider Plant Care: How to Maintain and Propagate the Popular Houseplant

If the arching allure of spider plant is drawing you into its web, here are some hints on how to look after that easy-care plant without getting tangled up in inessentials. 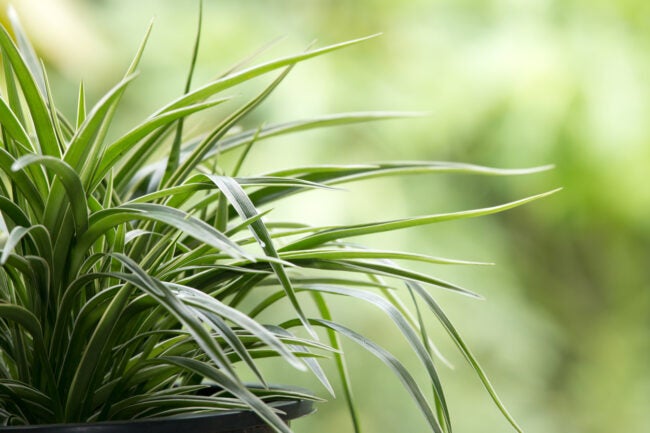 Named spider plant or spider ivy for the plantlets that dangle from its stems like spiders from stands of silk, Chlorophytum comosum also is known as airplane plant. But the idea that its offsets resemble spiderlings or propellers might be called a flight of fancy!

Native to South Africa and popular since the Victorian era when it sometimes went by “ribbon plant” as well, this not-so-scary “spider” is hardy in USDA hardiness zones 9 through 11. However, it most often is employed as a low-maintenance houseplant, so spider plant care shouldn’t alarm those afflicted either with arachnophobia or brown thumbs.

Spider Plant Care at a Glance

Like a fountain, spider plant’s rosette of thin, creased, and usually variegated foliage rises from the center of the pot and cascades, glistening down on all sides. The largest cultivars can grow 2 feet tall and about the same in width. However, the length of the leaves varies from 6 inches in dwarf types such as Mandaianum to 16 inches in full-size varieties such as Variegatum.
When mature, each plant should produce upright stems with racemes of ½-inch white, 6-pointed, star-shaped flowers. Those stems eventually bend to dangle the previously mentioned plantlets.

Spider plant may refuse to flower if kept in a too-large container or if it is overfertilized. To encourage blooming, move it for 3 weeks in autumn to a room that receives no artificial light in the evening. The shortening days should cue the plant that it is time to spin its magic into stars and spiderlings.

A standard potting soil mix with a pH of 6.0 to 6.5 should work fine for the spider plant. You might want to place it in a hanging basket suspended on a hook so it can dangle to its heart’s content without rooting itself in nearby pots. But it also sits pretty in a more typical pot on a table or pedestal.

If you choose a hanging basket, check to make sure there is a drip pan attached to catch any excess moisture that will drain from the bottom of that basket. Otherwise, it won’t be just the foliage that showers down!

Spider plant care light usually should be diffuse rather than direct. Because the variegated types can burn if given too much midday or afternoon sun, place them where they receive only mild morning sun or bright, indirect light. If you need to position yours near a south- or west-facing window, insert a sheer curtain between it and the glass.

A spider plant also makes a dangly and darling addition to a container garden or—if you have multiple small plants—to edge flower beds over the summer. Just make sure those containers or beds remain in partial shade or bright shade rather than full sun. Keep in mind that spider plants not receiving enough light will tend to droop rather than arch.

During spring and summer, keep your spider plant’s soil lightly moist at all times, but not soggy.  When autumn arrives, gradually cut back on the water. During winter, allow the soil to dry out to 1 inch below the surface before you irrigate it again. This should prevent the type of overwatering that can cause root rot.

The foliage grows from pudgy roots and rhizomes that can store moisture and nutrients to preserve its life should you be neglectful, which makes care for spider plant easier than for less prudent plants. But too much drying out will stress the health of your spider plant, making it more vulnerable to pests and disease.

Keep in mind that this houseplant also is sensitive to fluoride, which can cause brown tips on its foliage. If your tap water contains that element, you might want to consider watering it with rainwater or purchased spring water instead.

Spider plant care instructions should always include a warning against overfeeding, since that, too, can cause the previously mentioned brown tips that sometimes appear on its blades.  During the time when the plant grows most quickly in spring and summer, feed it every 2 weeks with a balanced houseplant fertilizer, but cut the amount to half of that which is recommended in the instructions.

In autumn, reduce that feeding to once a month, and don’t feed the plant at all during winter. If you need to repot your plant, do so in spring, but avoid fertilizing it for several months afterward until it is well established again.

Spider plant care indoors is made easier by the fact that the plant prefers average household temperatures between 65 and 75 degrees Fahrenheit, but generally will tolerate those as low as 55 or as high as 80. It usually can get by on average humidity too.

However, if the plant’s tips turn brown in a building that is being either extensively heated or air-conditioned and you have eliminated other causes for browning, its foliage could be suffering from dry indoor air. You might want to try placing it on a humidity tray, misting it daily, grouping it with other plants, or keeping it in a humid setting such as a bathroom.

To take advantage of your “spider’s” habit of throwing out offspring, arrange a few potting-mix filled containers near enough to that plant so the baby-bearing stems easily reach them. Select a plantlet that is about 2 inches across and, while leaving it attached to the mother plant, place it atop the soil in one of your smaller pots. Push it in just far enough that its root buds are underground.

Pin its “umbilical cord” (stem) down with something curved or heavy such as a landscape staple, partially opened paper clip, small stone, etc. After 2 to 3 weeks, give the plant a light tug to make sure that it has rooted, after which you can “cut the cord.” Keep in mind that larger plantlets can take longer to root, since they may have given up on the idea of their own digs and grown calluses over their buds.

Although spider plants are considered nontoxic to dogs, cats, and children, their dangling plantlets likely will be irresistible to tabbies and toddlers, who might want to grab at, pull on, or even eat them. (The fact that spider plant foliage reportedly also gives cats a hallucinogenic buzz might influence that choice.) However, the shape of those plantlets could make them a choking hazard.

Part of spider plant indoor care could be keeping it out of reach of those who want to play with it. Their yanking on the dangling strands also could potentially pull down or topple the pot, with possibly harmful consequences.

As mentioned previously, brown leaf tips may be caused by fluoride in your water, though boron can have the same effect. A reddish-brown color generally indicates fluoride and grayish-brown boron. But those dark tips also can be due to over-fertilization, low humidity, or dry soil.

Such stressors could also leave your spider plant vulnerable to pests such as scale insects, mealybugs, spider mites, and aphids. You often can get rid of the latter two types of pests by knocking them off with a strong stream of water from your shower or hose and repeating that treatment every few days until they all disappear. However, you may need to “rub out” the first scales and mealybugs in a more tedious manner, by applying rubbing alcohol with a Q-tip.

Below you’ll find a few quick questions and answers related to care of spider plant. Those of you growing the cultivar ‘Bonnie’ with her unusually wavy “locks” will be happy to hear that these answers also apply to curly spider plant care.

Q. Where should you place a spider plant?

Position a spider plant in a location with bright, indirect light or near an east-facing window.

Q. How much sun does a spider plant need?

Some, but never directly on the plant. Spider plant flourishes in bright, indirect light, but will tolerate some morning sun.

Q. Should I cut the brown tips off my spider plant?

Yes, you can trim brown tips from your spider plant’s leaves. But, unless you address the issues causing them (see “Potential Pests and Diseases” above), those brown tips will return.

Q. How high can a spider plant grow?

The largest cultivars may reach 2 feet in height, but dwarf types will remain much smaller.

Q. Can I leave my spider plant outside during the winter?

Spider plants growing in the ground can survive winters in USDA hardiness zones 9 through 11, though they may die back to their rhizomes during the coldest months.

Looking for more beginner-friendly plants or low-maintenance houseplants? Check out our guides on caring for snake plant, jade plant, and peace lily.

This Pilea Care Routine will Yield (Many) a Healthy, Happy Housep...
Advertisement

How to Grow Geraniums