What Is Bright, Indirect Light, Anyway?

If you’re puzzled by plant care descriptions of bright, indirect light, read on for some enlightenment. 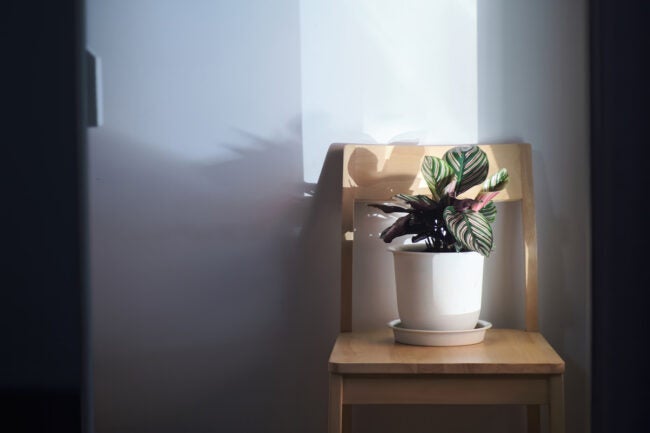 Many modern houseplants originated on the floors of rainforests, where an overhead canopy of tree foliage shaded them. Therefore, they aren’t accustomed to direct sunlight, which can burn their leaves.

Because the rainforest canopy is high up, however, the plants beneath it still receive bright, indirect light. So dark corners won’t suit them either. Therefore, you’ll want to strike a middle balance to grow what often are called medium-light houseplants. Indirect sunlight refers to the natural light that reaches the plant by bouncing off other surfaces, while filtered sunlight has been filtered through trees or diffused through a sheer curtain.

For a clear idea of what bright, indirect light means, it helps to review all three types of light requirements various plants might need. Light measurements come in foot-candles, which originally meant the amount of light shed 1 foot away from a designated number of candles; you can measure foot-candles with some phone apps or with a photography light meter.

Bright light, without the “indirect” adjective attached, usually means full sun near a window not shaded by nearby trees or buildings. That light generally is considered to be the equivalent of 1,000 foot-candles or more—up to 10,000 at noon on a cloudless summer day, perhaps 4,000 on a sunny winter one. If you hold your hand above a surface lit by this light, your hand will cast a sharply defined shadow.

Indirect light is in the 25 to 1,000 foot-candle range at midday, though most plants won’t thrive in the dim conditions on the lower end of that range. If your hand still casts a fairly distinct shadow, but is a bit fuzzy around the edges, you probably have bright, indirect light. A good number to shoot for is 500 foot candles, since—according to a University of Florida chart—that can accommodate houseplants that prefer both high and medium indirect illumination.

Low light is actually at the lower end of the indirect light scale, somewhere in the 25 to 300 foot-candle range at the brightest time of day. Under those conditions, your hand won’t cast much of a shadow. If you can’t read a newspaper in a spot in your home without supplemental lighting, that light probably is too low for any plants.

So, what is bright, indirect light?

To sum up, bright, indirect light is bright enough to cast a shadow—though not a dark, clearly defined one—and to read by. It can be found near north- and east-facing windows or shaded south- and west-facing ones, as well as a few feet back from unshaded south- or west-facing windows. It also can be created with the use of diffusing sheer curtains—white ones that you can see through—between the panes and the plants on windows that receive direct sun.

Bright enough light for houseplants likely won’t be found in rooms or hallways that have no windows or if plants sit in corners more than 5 feet from windows. For those areas, you can create bright, indirect light with the use of fluorescent or LED grow lights.

The best way to create bright, indirect light for your plants is by using your windows and the direction of the sun throughout the day.

The amount of light your plants receive often depends on which direction your windows face and how unobstructed those windows are. Keep in mind that white walls will reflect more light back to your plants than dark colors do.

South-facing window: If your south-facing window is unshaded by nearby trees or buildings and receives lots of sun during the day, place plants that require bright, indirect light about 3 to 5 feet away from the window or far enough back that the sun’s rays never quite reach them. Should that window be shaded or covered by a sheer drape that diffuses the light, you can place your plants as close to it as you please, so long as the drape remains between them and the glass.

West-facing window: The recommendations for an unshaded south-facing window generally apply to an unshaded west-facing one too—especially one that faces southwest. The afternoon sunlight it receives tends to be hotter and brighter than that taken in by an east-facing window. So in these westward-pointed windows, too, you either will want to place your plants 3 to 5 feet back from the panes or insert a sheer curtain between them and the window.

East-facing window: Even though an unshaded east-facing window receives direct sunlight in the morning, the rays are milder than those later in the day. Therefore, most plants that prefer bright, indirect light can be placed close to—or even on—the windowsill of an east-facing window without the need for a diffusing drape.

North-facing window: Since a north-facing window seldom receives direct sun, you usually can place plants that prefer bright, indirect light on its windowsill where they will receive the maximum amount of light available in that location. Because even that may not be enough illumination for them, especially during winter, you might want to place a mirror opposite the window to bounce more of its light back at the plants. Alternatively, consider purchasing a fluorescent or LED grow light.

Factors such as cloud cover, time of day, and the season can alter the brightness of indirect light.

Of course, the amount of illumination your plants receive naturally will be dimmer on overcast days and in the early morning and evening hours. Also, during the shorter days of winter, plants will receive fewer hours of light. So, those that won’t tolerate full sun during the rest of the year might handle it fine during the coldest months. However, some windows—such as south-facing ones overhung by broad eaves—actually may receive more direct sunlight during the winter due to the sun remaining lower in the southern sky during those months.

Since every household will be different, keep an eye on the color of your plants. If they appear to be an unnaturally dull, yellow, or lanky, they probably aren’t receiving enough light. If, on the other hand, they look burned and later bleached and as if they are attempting to shrink in on themselves rather than grow, they are receiving too much.

This Guide to Peperomia Care Covers Both Vining and Upright Varie...
Advertisement

20 Outdoor Plants You Can Propagate From Cuttings

This Guide to Nerve Plant Care will Yield Flashy Foliage for Your...