How To: Grow Mushrooms at Home

It’s easier than you think to grow delicious mushrooms at home: All you need are a few materials and a cool, dark space. 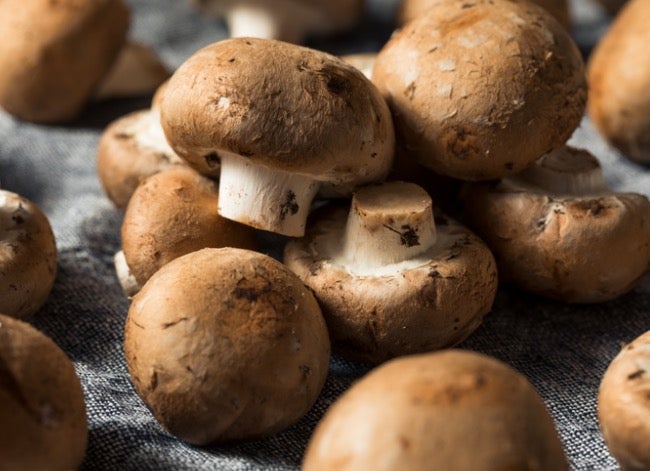 Nothing compares to the flavor of vegetables you’ve grown yourself. Unlike most vegetables, mushrooms actually grow well indoors because they thrive in cool, dark, and damp environments. Mushrooms can grow outside, of course, but inconsistent growing conditions may cause the process to take up to three years. The best place to grow them at home is in a basement or under a sink where they won’t be exposed to bright light. Even apartment dwellers with limited space can grow mushrooms.

Nearly any type of mushroom—including portobello, shiitake, button, oyster, cremini, and enoki—can be grown indoors, but each variety requires a different growing medium. This guide will explore how to grow white button mushrooms, which are actually the same species as cremini and portobello mushrooms.

The process of cultivating mushrooms differs from that of most other vegetables. Before we describe the growing process, it’s important to go over a few key terms.

Rather than buying their own mushroom spores, beginners may prefer to purchase a mushroom growing kit. These kits include a growing medium as well as mushroom spawn that has already been incubated. If using a kit, skip to Step 3.

STEP 1: Add the spores to the growing medium.

The first step is to set up the substrate, or growing medium. To do this, start with a planting tray that measures approximately 14 by 16 inches with a 6-inch depth. The tray can be made of wood, plastic, or metal. Fill the tray with a mixture of compost and manure, leaving an inch of space at the top of the tray. Then, spread the spores on top.

For best results, try to keep conditions sterile during this step so that other types of mold and fungi aren’t introduced to the substrate. Be sure to clean your hands thoroughly before working with the substrate, for example, and sterilize the knife and any other tools used.

STEP 2: Make sure the soil is moist all the time.

Mushrooms thrive in humid environments, so it’s essential to ensure that the soil remains moist throughout the growing process. To keep your growing medium moist, spray or mist it once or twice each day or cover it with damp towels.

RELATED: The Best Soil Moisture Meters for Your Gardens

For the first three weeks, the soil temperature must be incubated at 70 degrees in order to promote growth. This can be done by keeping the trays in a warmer area of the house, or you can place the tray on a seedling heat mat. Choose a heating pad that has precise temperature controls and place it under the tray. Using a soil thermometer, make sure that the temperature of the soil never rises above 70 degrees because higher temperatures can kill the spores.

STEP 4: Lower the temperature to between 55 and 60 degrees.

Soon white, rootlike growths—or mycelium—will appear on top of the soil. When the entire tray is covered, it’s time to lower the temperature. While many vegetables have to be grown in the summer, growing mushrooms is a great winter project because they thrive in cooler temperatures. Lower the temperature of the soil to between 55 and 60 degrees (to do so, you will probably need to remove the heating pad from under the tray), and cover the mycelium with about an inch of potting soil.

After a few days at this temperature, tiny mushrooms known as primordia will begin to sprout.

STEP 5: Harvest the mushrooms and enjoy!

Button mushrooms should be fully grown after three or four weeks. You’ll know they’re ready to be harvested when the caps open fully and separate from the stems. If they’re allowed to grow longer, they will turn brown and be categorized as cremini mushrooms. In their final stage of growth, they become even larger portobello mushrooms. In order to harvest the mushrooms, use a sharp knife to cut the stem. Do not pull mushrooms from the soil because the surrounding growth can be damaged in the process.

Mushrooms will grow continuously for approximately six months if they are harvested daily because each mushroom will release its own spores. When growth ceases, more mushroom spawn can be added to the existing growing station. It’s important to note that fresh mushrooms won’t last for long after they’re cut, so they should be cooked or eaten within a couple of days.

Use this method to easily grow tasty mushrooms for topping pizza, turning into a creamy soup, or eating in salads.

How To Dry Mushrooms
Advertisement

10 Mistakes Not to Make with a Home Generator