Many people who have security systems post signs to warn off criminals, and they can be surprisingly effective. 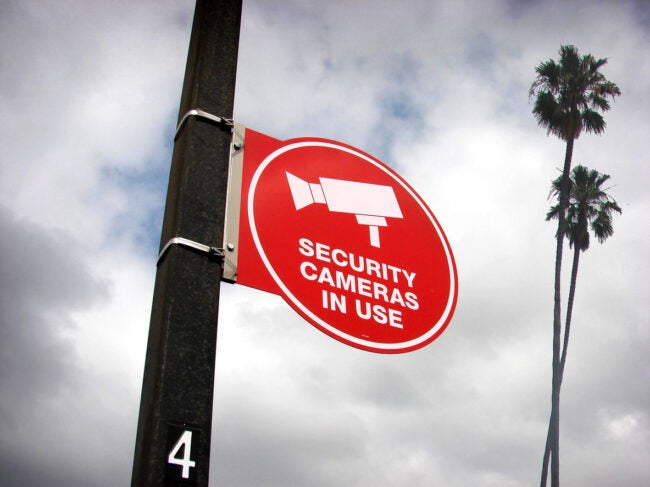 Q: I’ve noticed that many of my neighbors have security systems—or at least signs on their lawns that say they do. One neighbor actually told me that he didn’t want a security system, so he got a security company yard sign from a friend and just put it up himself! I’ve been planning to buy a system but would rather not clutter up my landscaping with signs. Do security signs deter crime?

A: While your neighbor may think he’s clever, it’s a big gamble to post signs without actually having a security system, especially if the name on the sign isn’t a real security company. Seasoned criminals know their business and may be onto your neighbor’s game faster than he expects! That said, there’s a lot of evidence that suggests a security system and its signage can, in fact, discourage criminals from targeting a home. Your instinct to pay the cost to add a security system to your home is a good one, but you may want to think about where you could place a few discreet signs that won’t be eyesores in your landscape.

Studies show that the presence of security signs outside a home can act as a crime deterrent.

Criminals won’t want to spend too much time obviously studying a potential target home. They’ll drive by, walk past, or check out a home online, or they’ll just choose a street one night and work their way down in the dark. They’ll be looking for the most vulnerable and likely targets; the smart criminal will choose a home without a security system over a house that does have one, and signage is an easy way to convey that a home is protected. The Department of Criminal Justice and Criminology at the University of North Carolina conducted a study in which burglars were surveyed about their habits and routines; the study revealed that 25 percent would walk away from a home that had security system signs on the property with no further investigation. For homes that have a branded security system in place, it’s recommended that homeowners use the signs and decals that note the company’s name, as those signs generally can’t be purchased unless the residents have an account with the company. Be leery of using similar-looking signs that display the names of fake security companies; criminals can simply look up the name of an unfamiliar company and discover that it doesn’t exist. Those who post signs that aren’t supported by an actual security system should keep the signs generic, indicating that security cameras are in use or that the home is protected by an alarm.

Signs don’t have to indicate the presence of a security system; some may act as notifications that cameras are in use, or that the area is frequently patrolled by security officers or police. Some people simply use a sign warning about the presence of dogs to deter burglars, whether they have dogs or not. The cacophony of barking, potentially biting dogs is something most burglars will go to great lengths to avoid.

Security signs suggest to burglars that the home has a security system; however, if there are no signs of a system in place, the sign may not be enough of a deterrent.

Planting an ADT yard sign or a SimpliSafe yard sign in the front lawn when you don’t subscribe to either service is a common idea to protect a home from break-ins, but they suggest the presence of a system that a smart burglar can quickly deduce isn’t there. The same University of North Carolina study found that 53 percent of burglars would unquestionably skip a home that had visible security cameras present. Other studies from Rutgers University and the Urban Institute back up that idea. What does this mean? Some criminals will bypass a home that displays signage, but others may poke around a little more looking for proof that a system is actually installed. When they find cameras, a majority of criminals will leave—and if they find several cameras in a neighborhood, they’ll move on. Some homeowners have tried using fake cameras, assuming that criminals won’t know the difference, but as with fake signs, these can be a risk if a potential thief realizes they aren’t real. Security signs help, and they may completely deter a criminal who is casually casing a house or neighborhood; if there are no other indications that there’s a system in place, however, a criminal might determine the signs aren’t real and break in.

Placing security signs near entry points or on fences or gates may deter would-be criminals.

What kind of signs are most effective? Many people use door or window sticker signage at obvious entry points, while others prefer stake-style signs in the yard. Some would-be burglars will come to the front door first to see if anyone is home, so if there’s a doorbell camera—or even a fake RIng doorbell—consider adding doorbell signage to let a burglar know they have already been recorded. For signs to have maximum impact, some should be clearly visible from the street—if the yard is surrounded by a privacy or decorative fence, mounting a sign on the fence or gate will make it likely that people approaching the home from the street will see them. It’s also worth posting a sign on backyard fences to catch the attention of criminals skirting through the neighbors’ backyards to avoid attention. In addition, it’s a good idea to place smaller signs or decals on likely entry points, such as the front and back doors, garage door, and first-floor or basement windows, which might be a weak point for house security. While it’s not necessary to wallpaper the whole exterior with signage, judiciously placing the signs where a potential burglar will most likely see them will maximize their effectiveness.

Fake security signs can infringe on company copyright and may be easily spotted by seasoned criminals.

Fake security signs and decals are easy to locate on the internet. “Security Cameras in Use” signs are fine, as are “Security System in Use” or even “Security Guard on Break” signs, whether you have these measures in place or not. But be very cautious about using signs that purport to be actual security company signage. These copies are often designed to closely match the logo and typeface of actual security companies, with just a detail or two changed or a letter excluded. Signs of this style can cause several problems for a homeowner or renter. First, if they closely mimic a copyrighted logo or design, there could be legal ramifications for displaying them. Second, most criminals are local and recognize the security companies that are most frequently used in your neighborhood. If the sign resembles that of an often-used company, criminals will pick up on the small differences, realize the sign is fake, and surmise that there isn’t really a system in place, which makes the home an easy target. Alternatively, savvy criminals who don’t recognize a logo or company name can look it up quickly on a cell phone, discover that no such company exists, and realize that there’s probably no system in use. This endangers the home and may even make it a bigger target than it would have been with no sign at all.

A security camera near the front and back doors can stop thieves from entering the home.

The Urban Institute conducted a series of studies in several cities to determine the effectiveness of security cameras against crime. The researchers placed 500 cameras in downtown Baltimore, and over the period of the study found that the cameras reduced the number of crimes by more than 30 per month. A 12 percent reduction in crime in Chicago is credited to the 8,000 cameras installed in Chicago. While the study had some mixed results and in some cases didn’t show changes as significant as these two results, they are impressive—and the study found that the presence of the cameras didn’t just cause criminals to move to other homes in the neighborhood; they chose to leave the neighborhood itself. Crime decreased in whole neighborhoods where cameras were installed around the entire area, so one home’s camera didn’t increase the likelihood that the neighbors without a camera would become the victims of crime.

Placing a camera near both entry doors to a home can prevent a burglar from choosing to try to force entry, and adding “Security Cameras in Use” signs to the wall or fence will draw the attention of a criminal and point out the protective devices. If a bold criminal should attempt a break-in anyway, the camera will notify the residents and the alarm monitoring company, if one is in place, that there’s a problem. This gives the residents time to find a safe location and call the police—and to sound an alarm or remotely turn on lights, which will likely drive the intruder away. The peace of mind they provide to homeowners can make the cost of installing security cameras well worth it.

Motion-sensor lights may stop a thief in action and cause them to flee before breaking into the home.

Even better than manually turning on lights at the first sign of a problem is having them flash on automatically when someone moves into their arc. Motion-sensor lights can be adjusted to the angle and sensitivity that works best for residents to illuminate dark corners of the yard. Intruders generally prefer the cover of darkness while they decide how to enter a home, and a floodlight abruptly flicking on when they’re somewhere too close to a home draws immediate attention from the home’s residents, neighbors, and passersby. This can interrupt the potential thief’s plan and force them to run before they have to answer uncomfortable questions about why they are there and what they are doing.

Motion-sensor lights can be tied into a camera system to trigger cameras to start recording when the sensor and light are triggered, resulting in brighter, higher-resolution recordings.

A complete home security system that includes signs can help protect a home from intruders and give homeowners peace of mind.

The best home security systems with cameras, lights, door and window sensors, and alarms, ideally with professional monitoring, can do the heavy lifting when it comes to protecting a home from determined intruders; some stellar companies to consider include Vivnt, ADT, Frontpoint, and SimpliSafe. Clear signs indicating that a security system is in place can be the first deterrent for burglars, keeping potential criminals off the property in the first place. This increases the overall safety of the home and yard, and of the homes and yards of nearby neighbors as well. Modern home security systems can be simple DIY affairs or full-service, professionally installed and monitored cameras, but adding any level of security to a home increases the residents’ sense of safety and well-being, and may even garner a discount on homeowners or renters insurance policies, making the price of home security systems worth it. The signs might just be the icing on the cake, but having them on display may help discourage criminals from targeting a home in the first place.

How To Prevent Package Theft: 10 Proven Steps to Keep Deliveries ...

How To Start a Neighborhood Watch

Solved! Is There a Home Insurance Discount for Security System In...

Solved! What Is Property Crime? How Can I Protect Against Becomin...

What Are the Different Types of Security Cameras, and Which One I...