Solved! Does Having a Dog Deter Burglars?

A faithful canine friend can be a great companion as well as a frontline defense of you and your home. Does having a dog deter burglars? We examine how a dog can help keep you safe—but how it’s not a foolproof method. 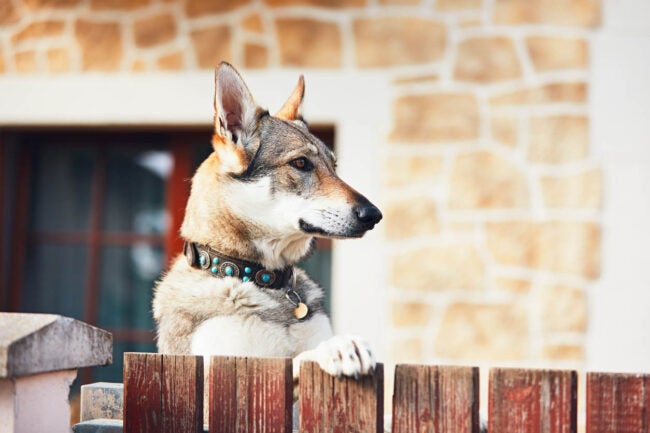 Q: Crime is on the rise in our neighborhood, and my neighbor just adopted a dog, claiming that the dog’s mere presence will keep criminals away from her home. How does having a dog deter burglars? Should I get one, too?

A: Your neighbor is correct—to an extent! Finding that a home they plan to burglarize is inhabited by a dog will often make criminals choose a different house. This can be the case even if the dog isn’t huge: Burglars have a plan, see an opportunity, and take it, so the unpredictability and potential for noisy commotion that dogs can cause are not what the burglars want. There is a difference, though, between a trained guard dog, a dog that has been trained to bark at strangers, and a dog that just barks a lot. In addition, dog ownership requires a lot of time, love, and money (with a lot of reward!), so unless you’re getting a trained dog specifically for guard duty, you need to make sure you’re also interested in owning the dog for companionship and are willing to invest the time.

According to home security giant ADT, dogs protect your home in a number of ways: Noise, physical barriers, and intimidation are all part of the equation. Alert barking can scare off a burglar or let the neighbors know something is amiss, and if you belong to a neighborhood watch, the barking dog will prompt neighbors to call the police. Dogs can’t always prevent a burglary—for that, you’ll want to support the dog with a good security system or alarm that summons human help—but dogs are a great deterrent and can slow down a burglary until help arrives. Home security company Deep Sentinel notes that even posting a sign that says “Beware of Dog” can deter burglars, even if you don’t actually own a dog.

Advertisement
Protect your home and family with a top-notch security system. Vivint’s professionally installed systems don’t just alert you to threats—they help both prevent and deter them. See Vivint’s cameras and services.

A burglar will likely be deterred by a barking dog.

Clever burglars use concealed entries, speed, and silence to get their jobs done quickly. Burglars interviewed in a series of reports on increasing levels of crime indicate that a loud, barking dog is the deal breaker for them—the combination of attention-grabbing sound and the unpredictability of a dog’s actions will almost always cause the burglar to move on. This is why some of the best watch dogs (dogs who alert their owners to potential trouble) have a loud, full bark, even if the stature of the dog itself isn’t terribly imposing.

Need a home security system? SimpliSafe can help. With a comprehensive whole-house solution, you can be prepared for the unexpected. View SimpliSafe systems and prices.

A dog will start barking as soon as it realizes that there is an intruder.

First-floor entries are the access point most burglars will choose, especially if they are obscured by shrubs or trees. If you have upgraded your locks and reinforced the glass on these entry points, a burglar will need to kick the lock in or break glass. Even dogs who aren’t trained as guard dogs will normally start to bark at a crashing sound—usually they’ll do so immediately, and are even more likely to do so once they see or smell that the source of the noise isn’t someone they recognize. Burglars don’t want to draw attention to themselves, so immediate noise is a deterrent. Plus a dog presents a potential physical threat; while an alarm means police are on the way, a burglar may take a few moments to grab whatever is in reach before leaving. An advancing barking dog will create a more immediate reason for a burglar to end an attempted home burglary without shopping around the house first.

Some breeds make better guard dogs than others.

Most dogs are fiercely loyal to and protective of their pack, which means you and the domain that belongs to them. Even dogs who seem mild-mannered will come to attention if the pack is threatened. However, some breeds are more effective guards than others. Small dogs that are not physically imposing can deter a burglar with the sound of their bark, but they won’t be threatening as they come trotting around the corner. The best guard dogs tend to be of larger stature and combine instinct, breeding, and training to be unusually loyal and defensive. Many of these are shepherd breeds: Bred and trained to control and defend grazing livestock, dogs such as the German Shepherd, Australian Shepherd, and Catahoula Leopard are particularly protective and have solid barks that alert any intruder to their approach. The American Kennel Club also identifies Akitas for their loyalty, Black Russian Terriers for their tenacity, and other breeds for individual qualities that make them ideal guard dogs.

When triggered, a good guard dog may try to physically stop a home intruder.

Trained alert dogs, as they are called, will bark immediately to let their owner know something is wrong. True guard dogs are carefully trained, ideally through only positive reinforcement, to bark at intruders and then, if the intruder doesn’t leave, to physically stop and contain the person. Normally this move will be reliant upon specific commands from the dog’s owner, but some dogs can be trained to stop and restrain the intruder until the dog is released by another command from the owner.

Having a dog does not guarantee burglary prevention and is best paired with a top home security system.

Of course, sometimes even the most determined, ferocious dog can’t stop a burglary. Some criminals may be unfazed by the barking dog deterrent that threatens others. If the dog isn’t formally trained, a burglar may be able to distract the dog with treats or toys, or may be able to physically repel the dog. In addition to taking steps to make your house unappealing to burglars from the outset, the best method of preventing burglary is to combine your deterrent canine with one of the best home security systems. That way, the dog can bark and potentially physically resist the intruder while the home security system (also a deterrent to burglars) can alert law enforcement that a break-in is in progress. Together, the dog’s aggressive response and the fast support of law enforcement will provide the best protection for your home, family, and possessions.

Solved! What Is Pet Liability Insurance for Renters, and Do I Nee...
Advertisement

What’s the Difference? Burglary vs. Robbery

How Safe Is My Neighborhood? 7 Tools to Find Out

36 Easy Ways to Protect Your Home from Break-Ins