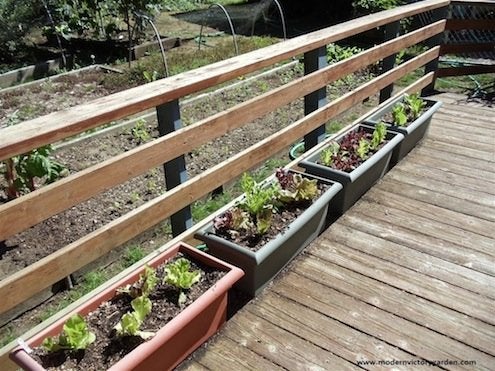 Though Punxsutawney Phil has barely gotten back into his den, you’re already itching to start spring planting! Unfortunately, the last frost is still about two months away. What’s a gardener to do?

Simple answer: Plant cool-weather crops in containers on your deck or front stoop! You’ll have homegrown salad on your table before you can even get one seed into your garden.

After all, greens like spinach, lettuce, arugula, swiss chard and kale thrive in the cooler temperatures—between 50 and 60 degrees Fahrenheit—and they’re as happy to grow in a pot or planter as anywhere. So fill some empty containers with dirt and get yourself some seeds!

If you plant seeds mid- to late-February, you should begin seeing sprouts by the middle of March (maybe sooner, weather depending). By mid-April, you’ll be bringing a harvest of leaf lettuce and spinach to the table—very likely before you’ve planted your summer veggie garden. Bitter greens like kale and Swiss chard take a bit longer to reach maturity, but they won’t be far behind.

Sow your seeds according to the package directions for each variety. It’s really as simple as poking your finger in the dirt (or creating a trowel line), planting the seeds, and covering them with a little soil.

Don’t be afraid to over-plant. You can always thin your plantings later. Just be mindful that the soil in containers dries out far more quickly than soil in the ground, so be sure to watch the moisture level and keep your plants watered well.

Once the hotter days of late June and early July arrive, these crops will start to sputter. Be ready to replace them with some pretty annuals to brighten your summer days. And then, once those flowers start to look shabby in late September, you can plant another crop of salad greens, harvesting through Thanksgiving.

TIP: When you buy your seeds for early spring, get an extra package or two to plant in fall. By the time you think about it at the end of summer, they’ll be long gone in the stores, and you won’t be able to find them.

Growing salad and bitter greens in containers is a great way for a beginning gardener to experience success. These plants don’t require much in the way of labor or space, and they bring so much to the table—literally!

For more on winter gardening, consider:

Upgrade Your Winter Garden with These 9 Colorful Perennials

5 Ways to Jump-Start Your Garden for Spring
Advertisement

How To: Dry Your Garden Herbs

How to Grow Peas