Handling and transporting firewood safely can help prevent invasive pests from decimating our forests. Moving firewood 10 miles or more from where it's cut, however, can prove problematic—and in some cases, illegal. 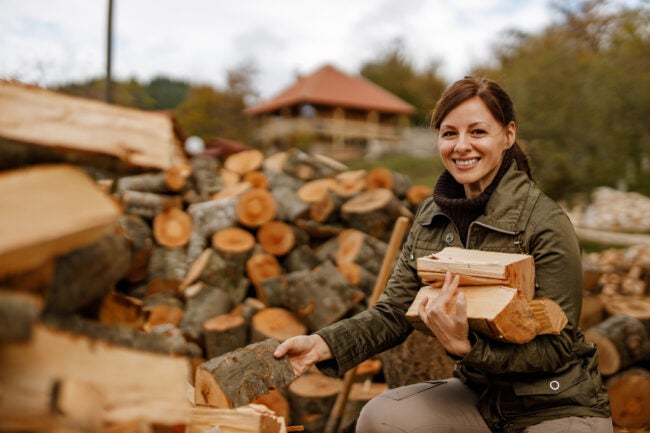 You might be tempted to bring your own firewood on your next camping trip, or haul back fallen logs to use in your home fireplace, but it’s important that you resist the urge. Here’s why: Transporting firewood long distances from its original setting gives highly damaging invasive insects, fungi, and bacteria a free ride. It may also be against state or county regulations.

Forests across the U.S. are being ravaged by a variety of non-native insects and diseases, including the emerald ash borer, Dutch elm disease, and hemlock woolly adelgid. According to the United States Department of Agriculture, more than 40 percent of the trees in U.S. forests are in danger of dying from the effects of the 15 most damaging non-native insects and diseases.

Here’s what you should know about safely storing and moving firewood, and how to select firewood that’s safe to transport.

Why are invasive pests a problem?

There are many native pests and diseases that affect our forests and trees, but as a general rule, most native trees have defenses against these pests, making it likelier that they can survive an infestation or infection. Some defense mechanisms trees use include emitting chemicals that attract pests’ enemies, secreting compounds that repel insect infestation, and walling off areas of decay. Trees are less prepared, however, to ward off “new” insects and diseases, as it takes a very long time to evolve the appropriate defensive response.

What are the laws that restrict transporting firewood?

Almost every state has laws and regulations regarding the transportation of firewood. Most states restrict or forbid the movement of firewood across state lines or for distances beyond 50 miles of the wood’s origin, and many have even stricter guidelines. This is especially true of areas affected by the emerald ash borer, one of the most damaging invasive pests.

While you probably won’t be jailed for breaking these laws, you could face a fine of $200 or more. To stay safe, follow the recommended guideline: “Buy it or cut it where you’ll use it.”

What is heat-treated firewood?

Packaged firewood is often labeled as kiln-dried or heat-treated. Note that kiln-dried wood is not safe for transportation across state lines or out of areas infested by the emerald ash borer, as there are no set standards for this treatment.

Wood that’s certified by the USDA as heat-treated firewood, however, is usually safe for transportation to wherever you plan on burning it. This wood has been heated to 140 degrees for 60 minutes, which is enough to kill any insect pests, including emerald ash borer eggs, larva, and adults.

RELATED: Solved! The Best Wood for Burning in the Fireplace

Can I cut and burn wood on my own property?

You might wonder if it’s okay to cut and burn wood on your own property. In this case, yes, it’s perfectly safe to do so, as you aren’t potentially moving invasive pests to a new location. Almost all states allow you to cut wood and transport it within a 10-mile zone from your home or the location where you plan to burn the wood. Some legally allow the transportation of firewood within a 50-mile radius of where it was cut.

Is wood purchased from a retailer safe to use?

Many people don’t cut firewood themselves and instead purchase firewood from retailers such as home improvement centers, supermarkets, and even gas stations. But before bringing that wood home or to a campground, check for a certification that the wood has been heat-treated. You’ll normally find the certification on the wrapper binding the logs together.

I don’t see any insects. Is it safe to move the wood?

While it’s always a good idea to check firewood for pests, including spiders, before loading it into your car, home, or garage, don’t assume that just because you don’t see any pests, they aren’t there. The eggs of most insects are very tiny and invasive fungi, bacteria, and viruses aren’t visible to the human eye at all. It’s best not to take a chance on inadvertently transporting an invasive insect to a new area, so don’t rely on visual inspection alone.

Is it okay to keep firewood near my home?

Even firewood that’s free from invasive insects can still harbor a wide range of pests that aren’t good to have inside your home, including spiders, termites, ants, and even mice. It’s best to keep firewood stacked outdoors in a spot with protection from rain and with good airflow on all sides. Keep your firewood a minimum of 3 feet from your home, and only bring wood inside as needed—one or two days’ worth at a time.

Solved! How Much Wood Is in a Cord of Wood?
Advertisement