You don't need to keep showering under an outdated shower head. Replacing it is easy—just follow this guide and go with the flow. 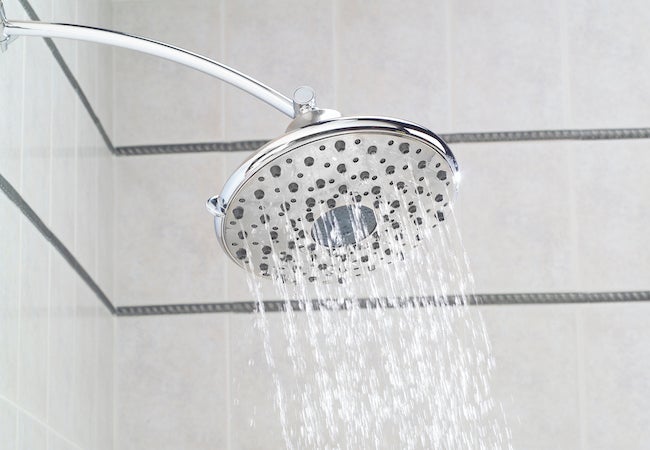 If the only obstacle standing in your way of replacing an old and corroded shower head is knowing how to replace a shower head, this article is for you. Not only is it disheartening to shower underneath an unattractive and  well-worn shower fixture, but the outdated model can also be costing you more on your monthly water bill.

For a quick fix, consider replacing an existing shower head with an energy-efficient, low-flow model. This newer option doesn’t mean low pressure, it just uses less water per minute, which saves resources in the long run. Follow these steps to learn how to change a shower head, and install a new fixed-mount or handheld shower head with ease.

After deciding that a shower head needs to be replaced, the next step in how to change a shower head is figuring out its replacement. While it’s lucky there are so many types available, it can take some time to figure out which kind is right for your shower. More than just finishes and styles, there are adjustable sprays, handhelds, wall mounts, top mounts, and shower panel systems. Plus, there are options with lights, music, temperature controls, and the ability to take phone calls.

Another consideration is the flow rate and pressure. Products that carry the EPA WaterSense label indicate that no more than 2 gpm (gallons per minute) is used. (A standard shower head uses 2.5 gpm.) If you are considering a low-flow shower head, keep in mind that it can’t increase your water pressure. Models that offer help with low water pressure are called high-pressure shower heads and include products such as the Speakman Anystream High Pressure Shower Head, which is our top pick in the Best High-Pressure Shower Heads guide.

For a versatile handheld option, Moen’s Engage Magnetix Six-Function Handheld Showerhead is WaterSense and Americans with Disabilities Act (ADA) compliant. If you need help narrowing down the options to find the perfect shower head for your bathroom, review our article on how to choose a shower head.

With any home update, there’s an opportunity to refresh a much-used space and make it more appealing and inviting. Upgrading the shower experience can help everyone in a household feel better, too. While updating the shower with a new shower head isn’t a tough DIY project, it’s important to set aside enough time to complete and test the installation so you aren’t without a way to shower.

The first step in this changing shower head project requires knowing how to remove a shower head. Removing the old fixture may be as easy as turning it counterclockwise a few times to see if you can remove it by hand.

If it won’t budge, grab a rag or towel and some tools for assistance. Wrap the rag around the shower arm—the pipe that connects the shower head to the wall—to protect it from damage as you grip onto it with slip-joint pliers. Then, clamp the adjustable wrench around the head’s base and twist it off counterclockwise until it’s removed from the arm.

As there’s likely some rust, scale, and other debris left behind from your old shower head, use the rag to clean inside and outside the arm. Not only will that clear a path for better pressure and cleaner shower water, but it will also make the installation process of your new shower head much easier.

Find the series of linear grooves, also called threads, at the end of the shower arm, and apply two or three passes of Teflon tape over them in a clockwise direction. Press the shower head tape firmly into the threads with your fingers with each wrap-around so that you can start to see them through the tape. This specialty plumbing tape acts as a seal; when you twist on a new shower head, it ensures a snug fit and prevents water flow from leaking where the hardware screws together.

Keep the tape handy since you might need it again after you check for leaks at the end of the installation.

The steps involved in installing a shower head depend on the type of replacement shower head chosen. While a standard wall-mount shower head may be easy to swap in and out, other types may require more work and professional installation. For each type, here is an overview of how to install a shower head:

STEP 5: Inspect your work and check for leaks.

Before you wash your hands of this job, check for any leaks that could lead to wasted spray and higher water bills. After the new shower head installation is complete, take a step back and turn the water on for a few moments. If you see any streams of water coming from the wrong parts of the hardware, turn off the water once more so that you can disassemble the head, dry it, and then secure it with more Teflon tape. Then, tightly secure it to the arm and test it again.

The process of how to change a shower head depends on the type of shower head you choose. While replacing one with the same type may be very simple for even beginning DIYers, installing one that will be placed in a different location or offers technology features can require some plumbing and electrical work and may require the help of a professional.

To ensure that your new hardware works properly and water flows freely in the long run, clean your shower head at the first sign of clogging or lower water pressure in order to keep scaly buildup at bay. You can either use a cleaner or unscrew the head and put it in the dishwasher. Whatever maintenance approach you choose, just make sure to regularly clean it so you’ll have a refreshing shower for years to come.

Q. How often should you change your shower head?

While some may claim that shower heads should be changed every year or sooner, it depends on the situation. If the shower head has been regularly cleaned and maintained and is no longer performing the same, or it’s moldy, covered in sediment, or is leaking, it may be time to replace it.

Most shower heads in the United States are made with a universal thread size so they can connect to a ½-inch National Pipe Tapered Thread (NPT) pipe. It’s important to check if a shower head fits with this standard before attempting to install.

Q. How do you change a shower head pipe?

Replacing a shower head pipe (also known as a shower arm) is not much harder than replacing just the shower head. To remove the old pipe, use a wrench to rotate the pipe counterclockwise. Clean the connection and replace the Teflon tape. Turn the new shower head pipe clockwise on the taped fitting. After it is installed, check for leaks.

How To: Install a Shower Head
Advertisement

How Much Does a Shower Remodel Cost?

Solved! What to Do About a Leaking Shower Head