How to Remove Snow From a Driveway Without a Shovel: 7 Solutions That Work

If you’re without a snow shovel and stressing about snow building up on the driveway and sidewalk, you can still keep them clear with these helpful tips. 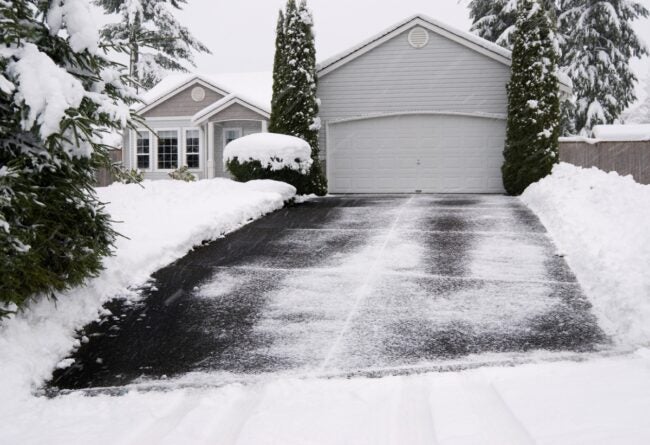 When snow falls, kids rejoice and break out their sleds—adults, on the other hand, reach for their snow shovels. But what happens if you don’t have a shovel handy?

Whether snow has arrived unexpectedly or your shovel is broken or misplaced, there are other effective ways to keep the pathways and sidewalks around your property safe and snow-free. Keep reading to find out how to remove snow from a driveway without a shovel.

RELATED: 8 Clever Hacks for How to Shovel Snow

Perhaps the most obvious way to get rid of snow without a shovel is by salting driveways and sidewalks. While it requires more careful timing than shoveling, salting is a time-tested and inexpensive alternative to professional snow removal.

Try to use driveway salt before snow arrives. Rock salt sets to work melting snow and ice by lowering water’s freezing point from the usual 32 degrees Fahrenheit to about 15 degrees. About 12 ounces of rock salt is all it takes to treat a 20-foot-long driveway.

Keep in mind that salting a driveway only works down to a certain temperature, around 5 degrees Fahrenheit, at which point ice will keep forming instead of melting away. At this point you should combine your salt with some sand for some extra traction.

Consider investing in snow melting mats before the season’s first snow falls. These mats install easily; simply place them along your walkway and plug them in when the flurries arrive. Snow melting mats heat up using electricity, melting away the snow as it falls.

In particular, no-slip options like these highly rated HeatTrak snow melting mats available at Amazon are recommended for added safety. Regardless of the brand you choose, you can move the mats where they’re needed, unlike a permanent heated driveway system. Snow melting mats can also add a little bit of extra traction to your walkway and driveway to help prevent slips and falls.

One idea for how to remove snow from a driveway without a shovel or salt involves using water and a couple of household ingredients to create a DIY snow melt.

Mix ½ gallon of warm water with six drops of dish soap and ¼ cup of rubbing alcohol—the alcohol has a lower freezing temperature than water, making it a vital ingredient for your ice melt solution. Pour or spray the solution over snow and ice to remove driveway ice buildup. Afterwards, sweep away excess water to prevent new ice from forming.

If you lack a snowblower as well as a snow shovel, you may have a perfectly suitable alternative sitting in your garage. A leaf blower can be used to clear away light and fluffy snow with minimal effort. Leaf blower snow removal works great for powdery snow, but it does have its limitations: If snow is packed with moisture, it becomes too heavy for a leaf blower to effectively remove it. At this point, you should switch driveway snow removal tactics to one of the other options listed here.

If you don’t get enough annual snowfall to warrant buying a snow shovel, or you only have a small walkway to clear, reach for a broom and tackle the snow with some manual power. This method works best with light, fluffy snow; thicker, heavier snow will require more effort on your part. Keep an eye on the snow as it falls, and sweep it away before it builds up too much.

With this method, you may have to make a few trips outdoors to keep your pathways snow-free.

Do you usually pack away your tarps for the winter season? If so, consider keeping them handy to remove snow from the driveway without a shovel. Watch the weather forecast for snow, then lay down your tarps before flakes start to fall. The tarps will catch the snow accumulation, and all you have to do is remove the snow-covered tarps to reveal a clear driveway or sidewalk.

Make sure you have somebody helping you with this one, as snow on top of the tarp can get heavy if left to accumulate for too long.

Creative snow removal ideas can make the chore more entertaining. If the right kind of snow is building up on your paths and driveway, you can roll large snowballs across the asphalt to pick up snow. As the snowballs get larger, they’ll pick up more snow with each push.

When your first snowball becomes too large, push it off of the concrete onto the lawn to form a snowman base, then start rolling another to form the snowman’s middle section. By the time you clear the entire driveway, you’ll likely have one or more lovely snowman friends to show for it.

FAQ About Removing Snow Without a Shovel

When removing snow from a driveway without a shovel, you’re mostly limited to your imagination and tools at hand. The above tips on the best ways to remove snow are a great starting point, but check out these answers to common questions about driveway snow removal for more advice.

Q. Can I use hot water to melt ice on a driveway?

As tempting as using hot water to melt ice on a driveway may seem, don’t do it. If the weather’s cold enough to form ice on the driveway, hot water will only create more ice once it cools and freezes.

Q. Should I salt my driveway before or after it snows?

You should salt your driveway before snow falls, as salt prevents ice from forming and snow from settling. You can use salt after it snows, but the results will be less effective.

Q. What kind of ice melt does not damage concrete?

Calcium chloride is the safest type of ice melt for concrete. It works down to temperatures as low as -15 degrees Fahrenheit and does not freeze and thaw, helping to prevent damage from ice’s pressure on concrete.

Q. What is the fastest way to melt snow from my driveway?

One of the fastest ways to melt snow from a driveway is a mixture of ½ gallon of warm water with, six drops of dish soap, and ¼ cup of rubbing alcohol. Pour this solution directly onto the snow, and it should break up ice right away.

Q. When should I clear snow from my driveway?

Snow should be cleared as often as you can to prevent buildup of snow and ice. It is easier to do smaller cleanups than one large one. If there’s a lot of snow and your driveway is very large, it may be a good idea to look into snow removal services.

Q. Will vinegar melt the ice from my driveway?

Because it contains acetic acid, vinegar lowers the freezing point of water. Although vinegar will melt ice on a driveway, it is not as efficient as other substances, such as rock salt.

Q. Can you remove snow with a leaf blower?

Leaf blower snow removal is a viable option if the snow is light and fluffy. As soon as snow gets too heavy and wet, however, leaf blowers become much less effective.

The 30 Easiest Organizing Tasks Ever

10 Trendy Ways to Use Glass Block in Your Home Design

The 8 Best Climbing Roses for Your Garden Trellis, Arbor, or Pergola

35 Patriotic Places to Visit This Fourth of July