This is the Most Popular Home Office Setup During the Pandemic

A new study has established the best remote work setup, according to the Internet. Does your space fit the trend? 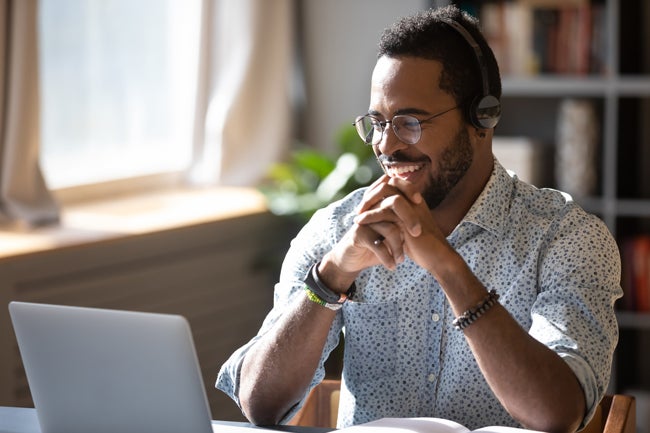 The COVID-19 pandemic has completely changed the way we work, forcing many of us to hastily set up home offices so we can do our jobs remotely. While back in March it may have been acceptable to conduct Zoom meetings from your couch, it soon became clear that establishing a more permanent setup was necessary.

A new study by Viasat Savings looked at 1,200 data points from March to September 2020, examining both social media and shopping trends. They analyzed photos from 20 different Instagram hashtags like #homeoffice and #workingfromhome, as well as buying patterns from Google Shopping and Amazon. Here’s what they discovered about how remote workers have set up their home offices.

RELATED: How to Soundproof Your Home Office

According to popular photos on Instagram, most people favor a calming monochromatic color scheme when it comes to their home offices. Of the photos analyzed in the study, 43 percent featured white walls, making it the most popular paint color. Also, 42 percent of people chose white desks for a sleek, minimalist look. Searches for modern desks were the most prevalent, but shoppers in states like Arizona, Arkansas, Iowa, and Tennessee favored farmhouse-style desks. Interestingly, pink desks were also popular, beating out dark brown, green, blue, yellow, and tan—showing that the millennial aesthetic isn’t going away any time soon.

While ergonomic swivel chairs may be better for your back, it turns out static chairs were much more popular this year—at least on Instagram. Of the photos included in the study, 37 percent featured simple mid-century modern chairs with clean lines. That’s in contrast to Amazon shopping trends which showed that 55 percent of chairs purchased were the practical mesh kind you’d find in most traditional offices. So while people may be sitting on comfy, padded office chairs, it seems they’re not posting photos of them.

RELATED: What You Need to Know About Home Office Wiring Connections

Most of us haven’t been able to explore the great outdoors as much as we’d have liked to this year, so it should come as no surprise that houseplants were a popular choice for home offices during the pandemic. Of the photos of Instagram users’ work-from-home setups, 42 percent featured greenery while only 25 percent featured practical items like pens or note pads.

While the age-old rivalry between Mac and PC users will certainly rage on, there was a clear winner on Instagram: 70 percent of photos featured Apple computers while just 23 percent featured PCs. Interestingly, 7 percent didn’t feature a computer at all, raising questions about how those users are possibly getting any work done.

RELATED: The Best Desks for the Home Office

The Most Instagrammable Setup

Looking to become a social media influencer? Based on the information from the study, the best—or at least the most photogenic—home office features simple white walls, a white desk, a static mid-century modern chair, an Apple computer and at least one houseplant. Time to redecorate!

12 Ways the Home Changed for the Better in 2020
Advertisement