Grow This, Not That: 12 Native Alternatives to Invasive Plants

Save the environment (and your garden) by avoiding invasive imported plants—and growing these native species instead. 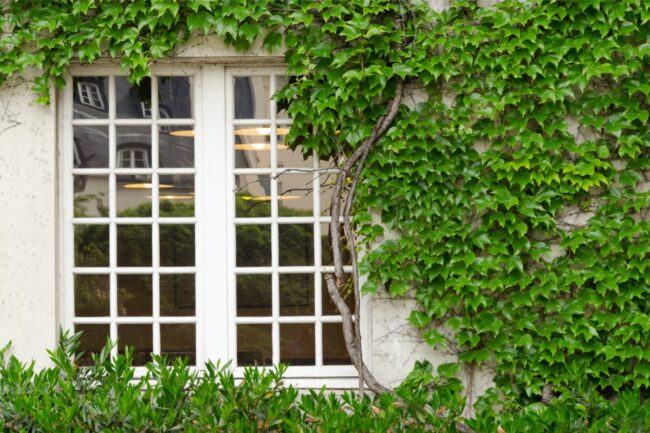 Invasive plant species often are ornamental plants that were introduced from other regions into ecosystems where they were never intended to grow. They can overwhelm native species, destroying habitats for wildlife and insects in the process. Rather than planting these species on your property, we suggest you instead look for indigenous ornamentals that are similar in appearance to the aggressive interlopers you want to grow.

Although native plants might be less harmful, keep in mind that they don’t survive in the wild by being shrinking violets. Native plants will often push their boundaries if they’re allowed to do so.

Native to Europe and Asia, English ivy is known to climb the walls of universities. English ivy has three- to five-lobed evergreen leaves, and it produces clusters of greenish-white blooms followed by black berries as summer fades into autumn. However, it also can drape itself over and smother trees and other plants, as well as creep into cracks in structures.

Native to the U.S., Virginia creeper climbs “hand over hand” with palmate foliage that turns red in fall before dropping. Its deciduous nature makes it less suffocating than ivy. This vine also features greenish-white flowers and dark berries, but shouldn’t be allowed to climb on wooden buildings due to its “suction cups.”

This invasive bittersweet has roundish leaves and yellow berries on short side shoots that burst open to reveal red arils, but they’re often obscured by the vine’s foliage. It grows so aggressively that it sometimes topples trees under its weight.

In the native species—considered threatened in some states due to competition or crossing with the Oriental type—the more intensely hued berries usually are orange with red arils. They appear in clusters at the ends of shoots, where they are less likely to be hidden by the plant’s oval leaves.

Highly attractive, this Chinese “royal” wears large heart-shaped leaves and clusters of lilac-colored trumpet-shaped flowers with yellow smudges and purple veins or freckles that appear before the foliage does. Because of its fast growth and prolific seeding, it runs roughshod over many other established plants.

Native catalpas also boast huge hearts for foliage and clusters of trumpet-shaped spring or early summer blooms in a similar “vein” to paulownias’ flowers. However, the main color of catalpa’s flowers is typically white. Although it also self-sows freely, this tree is considered less domineering than the empress.

Native to Europe and Africa, Scotch broom “sweeps” over hills and dales alike, crowding out other plants in its path. A highly vigorous shrub with stiff branches and sweet pea-like sunny yellow blooms in its leaf axils, it’s undoubtedly pretty but difficult to eradicate from a garden.

Although this native bush’s blooms are round rather than sweet pea-like, it, too, produces a profusion of sunny yellow flowers in spring in environments similar to those preferred by broom. The flannel on the undersides of fremontodendron’s foliage can irritate the skin, but the shrub is less irritatingly invasive than Scotch broom.

RELATED: 15 Plants Never to Grow in Your Yard

With pinnate foliage and panicles of greenish yellow flowers in spring or early summer, the Chinese tree of heaven is less than heavenly due to its ability to poison the ground around it. The tree is a well-known native plant killer. This ailanthus sometimes is called “stinking sumac” because its foliage, when crushed foliage, gives off a distinctly unpleasant odor.

For an angelic replacement for stinking sumac consider an actual sumac, such as the native “winged” variety. Winged sumac also produces panicles of greenish flowers, but it does so in late summer above shining pinnate foliage. Although this sumac spreads freely, it’s loved by birds and pollinators.

A South American plant originally imported into the U. S. because its glossy pinnate foliage and red winter berries make excellent Christmas decorations, the Brazilian peppertree now peppers much of the southernmost U.S. Those pretty red berries allow it to seed itself too extensively.

Also sporting polished evergreen foliage and red winter berries, this native holly is an obvious replacement for the pepper tree, both in your landscape and holiday decorating. Just carefully mind its species name and don’t try to eat any part of it!

This landscaping shrub has small semi-evergreen leaves and clusters of white blooms (considered fragrant by some, and fetid by others) in summer. Those blooms give way to purple berries, from which birds are happy to plant the seeds, resulting in a plethora of privet at the expense of native plants.

A native holly can help here, too—in this case inkberry, which also produces small white flowers in late spring to early summer followed by dark berries. This evergreen reportedly retains its foliage better than the semi-evergreen privet does, so it’s a better choice for hedges overall.

This invasive honeysuckle sports glossy, oval leaves and fragrant, somewhat spidery-looking white and yellow blooms that produce black berries in the fall. It blooms from from spring to autumn, and grows so rampantly that it smothers other species beneath it.

You may want to try this less aggressive American variety as an alternative to Japanese honeysuckle. The native species, which is also known as coral honeysuckle, produces colorful blooms—orange to red—followed by red berries. Keep in mind that while its trumpet-shaped flowers aren’t fragrant, they do attract hummingbirds.

RELATED: 25 Plants That Survive With or Without You

Although a Chinese wisteria vine can produce 1-foot racemes of fragrant, lavender sweet-pea-like flowers, it also vines to 100 feet, and its ropes of pinnate foliage are dangerous to any plants it decides to clamber over. The weight of those vines also can topple any but the sturdiest of trellises.

American wisteria makes flower clusters about 6 inches long, but the related Kentucky wisteria reportedly produces racemes as extensive as those of sinensis. Either native alternative is a good choice for a vine that’s easier to control and apt to reach blooming age sooner than the Chinese type.

Introduced to the U.S. from Europe so its cylindrical dried flower heads could be used in textile “fulling,” this species is also known as Fuller’s teasel. The prickly leafed plant grows to 6 feet. Its dried heads also are popular in flower arrangements, but the “fulsome” plant crowds out many native ones.

A native form of sea holly, rattlesnake master grows to only 5 feet but makes striking, dome-shaped flowerheads over yucca-like spiny foliage. Those dried heads can decorate bouquets or your winter garden.

Once promoted as an alternative to barberries harboring the black stem rust that harms agricultural crops, this prickly plant with roundish dark green leaves has quickly formed colonies and shouldered out many native plant varieties. Although its bright red berries are attractive, they also help the shrub sow itself aggressively.

This native barberry also produces abundant yellow blooms and red berries on a spiny bush. It is more adapted to dry areas of the Western U.S., where it is a tough and drought-resistant native shrub. However, it reportedly passes on black stem rust, so it should not be grown in agricultural areas.

RELATED: The 15 Best Plants for Your Bedroom, and Why

Introduced to the U.S. as an ornamental in the 19th century for its bamboo-like stems, large, lush foliage, and clusters of white late-summer flowers, this plant took off in more ways than one. Due to its spreading via rhizomes, this invasive plant species is very difficult to eradicate completely.

Unfortunately, most genuine bamboos thrive only in warm climates. But, if it’s just the lush and large-leaved look you want, try this aralia, which can make pinnate fronds up to 6 feet long and is what The New Sunset Western Garden Book calls “one of the most tropical-looking genuinely hardy plants.”

How to Grow Milkweed
Advertisement

How to Grow a Butterfly Bush

17 Types of Wildflowers Every Home Gardener Should Know

10 Endangered Plants You Can Help Save at Home

The Best Low-Maintenance Ground Cover Plants for Your Property