An air fryer is a healthier way of cooking many of the foods we all hate to love. 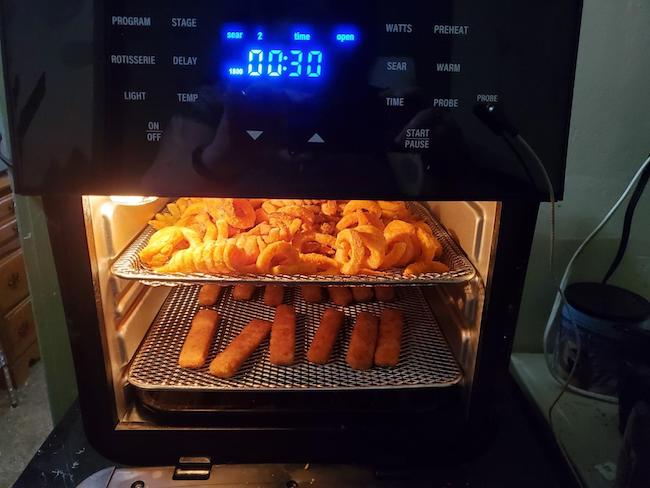 My wife and I were no strangers to the world of air frying when we began shopping for a second, larger air fryer. Despite my doubts about air fryers, we quickly fell in love with our first one, a small basket-style cooker that produced perfectly crispy chicken wings and tender panko fried shrimp. These and other fried wonders that would be so unhealthy when fried in fat were often just as good while being much healthier than the deep-fried versions when cooked in the air fryer. While we had grown so close to our little air fryer that the oven would sometimes stay cold for weeks at a time, we soon found we wanted more out of that relationship and thus began the hunt for a larger model.

Is an air fryer really healthier than fried food?

Fried food typically conjures images of greasy fast food and clogged arteries. An air fryer removes the main culprit that makes fried food so unhealthy—cooking oil. By taking away the vat of fat that a traditional fryer uses to cook food and replacing it with superheated air, an air fryer cuts calories by about 70 to 80 percent while drastically reducing the amount of trans and saturated fat in the food, according to WebMD. Given our penchant for fries, fried chicken, and other crispy delights, these stats were enough reason for us to purchase our first air fryer.

After a thorough virtual vetting of many air fryers, we selected the NuWave Brio 15.5-Quart Large Capacity Air Fryer (available on Amazon). What attracted us to this model was its large capacity—it holds a whopping 15 quarts—and its long list of useful features.

The key to cooking successfully with an air fryer is to have space between each piece of food to allow the hot air to circulate—stacking food is a no-no. The Nuwave’s two racks make it easy for me to lay out chicken nuggets, mozzarella sticks, veggies, or chicken legs and thighs and still allow for breathing room, something that was a challenge with the basket style fryer. The limited space of the basket often forced us to cook food in batches for a single meal, which was time-consuming.

Digital controls were also a draw. Whereas our first model has inexact analog controls for setting the fryer’s timer and temperature, the Nuwave has digital controls that make it easy to set both. I can also adjust the wattage from 900 watts to 1500 or 1800 watts, which has the effect of searing the food, key to getting that crispy texture one associates with fried food.

We love the rotisserie features most of all.

Who hasn’t walked through the local supermarket and been seduced by the rows of succulent rotisserie chickens rotating in the oven behind the deli counter? While our first basket-style fryer was just big enough to accommodate a 2-pound Cornish game hen, this model allows us to up the ante to 5-pound fryers (Nuwave’s claim that the rotisserie function can handle 7-pound chickens is a bit far-fetched).

This air fryer includes a rotisserie system for chickens and roasts, and it’s one of its best features. Half the fun is watching the chicken rotate and roast through the oven window as the wonderful aroma of roasting chicken fills our home. A 5-pound chicken fully cooks in 45 minutes, and since the air frying process cooks it so quickly, there’s no time for it to dry out, resulting in moist and tender meat that would shame many of those birds at the supermarket deli.

This appliance is a countertop hog, but we still keep it out year-round.

As much as we love the large capacity of this air fryer, it makes for a larger appliance. At 13 inches wide, 15.5 inches deep, and 16 inches high, the Nuwave Brio takes up a significant chunk of real estate on the counter. Couple its size with a weight of 21 pounds, and we quickly realized we wouldn’t be storing this air fryer in a cabinet as we had our smaller basket-style model. Luckily, we have counter space to spare, so bequeathing the Nuwave a permanent spot on the countertop wasn’t such a big compromise, especially since we use it so often.

RELATED: How Long Each of Your Major Appliances Should Last

The Best Smart Gadgets to Use in the Kitchen

The Best Air Fryers of 2022
Advertisement

The Best Deep Fryers for the Kitchen