All You Need to Know About PEX Pipe

Find out why this colorful tubing is the up-and-coming plumbing trend that has DIYers excited. 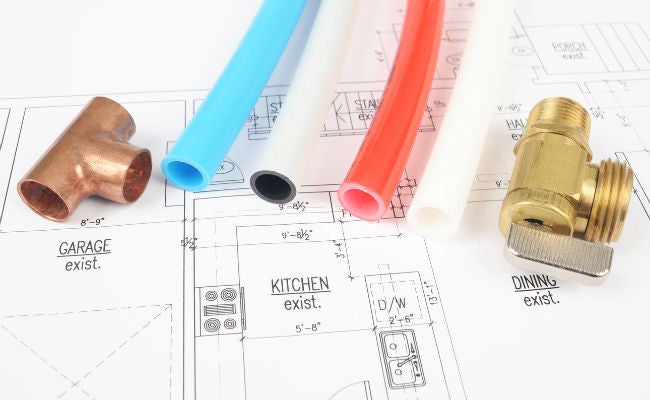 Cross-linked polyethylene (PEX), a type of flexible plastic, is currently replacing traditional copper and galvanized steel as water supply lines in both new construction and remodeling projects. You’ve probably seen rolls of blue and red PEX pipe in the plumbing aisle of your local home improvement store, but might not know that this colorful tubing now makes it possible for enthusiastic DIYers to replace their own leaky water lines instead of calling a pro. Read on to learn more about PEX—what it is, where it can be used, and all the pros and cons of this popular plumbing material.

PEX, Past and Present

In 1968, German scientist Thomas Engle discovered a way to crosslink common plastic (polyethylene) through radiation to produce a much suppler form of the material. The new plastic, fashioned into flexible PEX pipe (also known as PEX tubing), arrived in the US in the 1980s, initially for radiant floor heating systems: The flexible tubing is embedded in a concrete slab and hot water pumped through to heat the slab and radiate heat to rest of the room. PEX pipe remains popular for radiant floor heating.

While PEX use for water supply systems has been widespread in Europe since the 1980s, it was a latecomer here because some early versions deteriorated slightly when exposed to the high chlorine levels common in US water supplies. Adding antioxidants during manufacturing made PEX suitable for carrying drinking water and, over the past two decades, having met our potable drinking water standards, it started catching on.

Complaints about early PEX water systems cropped up when the fittings used to connect the pipes failed and leaked. Improved fittings solved that problem and the popularity of PEX surged. Today, PEX is used in more than 60 percent of new construction residential water supply systems.

PEX is available in a variety of lengths, from short 10-foot pieces (for small repairs) to rolls over 500 feet long, which are used to install a home’s entire water supply system. PEX pipe ranges from 3/8- to 1-inch in diameter and its color-coding makes it a snap to identify what a specific pipe is used for. Although there are three types of PEX (see Label Lingo, below), the different colors don’t connote the distinctions; they simply make it easy for the installer to identify which lines carry hot water and which carry cold.

Traditional copper and galvanized steel water systems feature main lines and a series of smaller branch lines that lead to each fixture. Each branch that attaches to the main line requires a separate connection. PEX has a distinct advantage over these materials because of its flexibility, which allows one end of PEX pipe to connect to a PEX manifold (the main water control system) and then wind through walls and floors—uninterrupted—all the way to an individual fixture. Called “homerun” plumbing, by using a single length of PEX for each hot and cold water supply fixture in your home, it eliminates the risk of leaks at multiple connection sites.

Beyond flexibility, PEX has other advantages—and two main considerations.

The different types of PEX are distinguished by the manufacturing process used to make the tubing. When shopping for PEX, you may notice rolls labeled with either an A, B, or C designation. Choose the tubing best suited to your needs:

To make watertight connections with PEX pipe, you’ll need the right tools and supplies. For each of the following methods of connecting, the fittings and connectors must be an exact match to the size of the PEX pipe. Hundreds of types of fittings, usually brass, are available for connecting PEX to existing copper or steel pipes, and for making connections to fixtures. Fittings are also available for connecting pipes of different sizes. The following five methods are used for making the connections watertight.

How To: Connect PEX to Copper or PVC
Advertisement

10 Handy Things You Can Do with a Hose Wand