Try your luck with the shamrock plant whose colorful three- or four-leaf “clovers” may bring you good fortune—or at least good foliage! 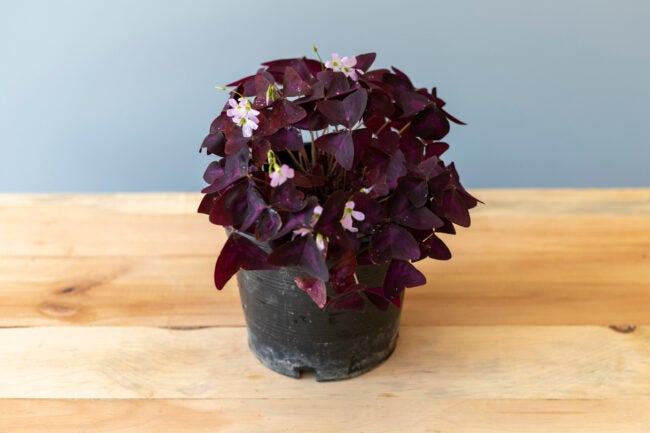 Often sold around Saint Patrick’s Day, shamrock plants (Oxalis spp.) have leaves composed of three to four leaflets that look much like shamrocks or four-leaf clovers. Although they aren’t related to the Irish Trifolium repens, shamrock plants make much better flowering houseplants than clover!

Fortunately, shamrock plant care is easy, even though some species have a disconcerting habit of dropping into dormancy on occasion. However, such “sleeps” are more likely to refresh than to kill them.

RELATED: 12 Lucky Plants Worth Bringing Into Your Home

Shamrock Plant Care at a Glance

According to the Pacific Bulb Society, all oxalis species spring up from underground storage organs, but those vary and can be bulbs, rhizomes, tubers, or tap roots. Shamrock plants grow from 2 inches to 3 feet tall, depending on the species. They form clusters of small, trumpet-shaped pink, red, white, or yellow blooms to accompany their clover-like foliage. Although some types are perennial as far north as zone 3, houseplant types Oxalis triangularis and Oxalis tetraphylla only are hardy to about USDA hardiness zones 7 through 10.

When not exposed to excessive heat or dryness, purple O. triangularis cultivars can continue to grow without a dormancy period, and the colorful houseplants usually will sprout again within a month if they do die back. Other varieties may require a winter’s nap of 3 months or more. Generally, green shamrock is sold as Oxalis regnellii and purple shamrock as O. triangularis, though those species names are considered synonymous with each other.

A fast-draining standard potting mix should work well for most types of oxalis. However, make sure that the containers have drainage holes, or excess moisture could build up enough to rot the plants’ rhizomes and roots. Allow shamrocks to become slightly pot-bound before repotting them, since less soil reduces the likelihood of rot.

Those who tend to overwater indoor plants or who plan to grow alpine species of oxalis—which require especially well-draining soil—may want to try the alpine mix suggested by “Fine Gardening.” It consists of one part potting mix, one part expanded slate or shale, and one part playground sand.

RELATED: Count On These 25 Indoor Plants for Easy Color Year-Round

Oxalis prefers plenty of illumination, but that can vary from full sun to bright, indirect light. To prevent the overheating that can cause it to drop into dormancy, place the plant in an east-facing location where it receives sun only during the morning. An exception is Oxalis hedysaroides, which should have full sun all day and as much warmth as possible.

Keep in mind that oxalis often closes its leaves and flowers when the light dims, either during the night or on cloudy days. It also might occasionally use that folding as a defense against too much sun. In that case, either move it to a shadier location or protect it with a sheer curtain hung between it and the scorching rays.

When caring for shamrock plants, water them whenever the surface of their soil feels dry to the touch. Although oxalis will tolerate complete drying out for short periods of time, too long a stretch of aridity may cause it to go dormant. So, water it enough to keep the soil beneath the surface lightly damp, except when caring for O. hedysaroides, which should be allowed to dry out between waterings.

If the plant begins to shrivel after its summer blooming, cease watering it and allow it to die back to its rhizomes. Place the pot in a cool, dark location until new sprouts begin to appear, which can take 1 to 3 months or more. At that point, return it to a brightly lit location and resume the usual watering schedule.

Oxalis plants don’t require high levels of fertilizer, which can build up in their soil. So feed them only once a month from spring through autumn with a balanced organic liquid plant food applied at one-fourth the recommended strength. Don’t fertilize the plants during winter or when they are dormant.

If a build-up of fertilizer salts in the soil of an oxalis plant is apparent, place the pot in a sink with an open drain. Then pour lukewarm water into the container until it runs freely through the pot’s drainage holes and down the drain. Wait until the pot stops dripping to place it back in its saucer.

RELATED: How to Increase Humidity for Your Houseplants, Even During the Driest Days of Winter

The oxalis plant also enjoys average household humidity to high humidity. In dry homes, increase the moisture in the air around it by placing it in a humid location such as a bathroom, near a sink, inside a cluster of other plants, or on a humidity tray like this highly rated option available at Amazon.

Once an oxalis plant’s pot becomes overcrowded with rhizomes, move some of those to a new container filled with fresh potting mix, preferably at about the time the plant typically emerges from dormancy in spring. To do that, water the original pot well first and remove the rhizomes from it.

Use your fingers to pull individual rhizomes or a cluster of rhizomes away from the clump. Place them in the new pot, burying them only about ½-inch deep. Then place both pots in a bright location until their rhizomes begin to sprout.

As its name implies, oxalis contains oxalic acid. Although the acid is found in a variety of edible plants, including rhubarb and spinach, it can be a problem for animals or people who are sensitive to it. On rare occasions, it may even cause kidney disease in pets and livestock that consume a large amount of oxalis foliage.

So, even though some species have been used as salad greens, all parts of the shamrock plant are considered somewhat toxic, and it is best to keep it out of reach of both children and pets. In pets, it can reportedly cause symptoms such as trembling and drooling.

If the leaf stems of an oxalis begin to collapse and appear soft at the base—and its rhizomes and roots appear dark brown rather than tan—the plant could be suffering from root rot caused by too much moisture. In that case, remove any already decayed roots and rhizomes before repotting the oxalis in less soggy soil.

The plant may also suffer from aphid infestations. Aphids resemble large lice and come in a variety of colors, the most common being green. They usually can be “shot” off of the stems or leaves with a strong stream of water from a spray bottle.

RELATED: 14 Symptoms of an Unhappy Houseplant (and How You Can Treat Them)

Below you’ll find a few questions and answers on the subject of how to care for shamrock plants. These cover some of the basics, such as watering and pruning, but you still may want to consult the article above for more in-depth information on how to keep your indoor oxalis plants “in clover!”

Q. How long does a shamrock plant last?

A shamrock plant can last indefinitely, though it may drop into dormancy from time to time.

Q. Is shamrock an indoor or outdoor plant?

It can be either, as some shamrock plants are hardy and some not. Check the plant’s recommended zone for cold hardiness before placing it outdoors.

Q. How often should a shamrock plant be watered?

Water the plant whenever the surface of its soil has dried out.

Q. Are shamrock plants easy to care for?

Yes, shamrock plants are easy to care for, since their rhizomes often allow them to return from the “death” sometimes caused by underwatering or overheating.

Q. How do I make a shamrock bushy?

The plant will grow bushier as its rhizomes multiply, increasing the number of leaf and flower stems.

Q. Should I cut back my shamrock plant?

Only cut back a shamrock plant when you want to force it into dormancy or after it has already gone dormant.

Looking for more “lucky” houseplants? Check out our guides on caring for eucalyptus, jade plant, and peace lily.

20 Flowering Houseplants That Will Add Beauty to Your Home

How to Grow Gerbera Daisies