If your plant is drooping or dropping leaves, get to the root of the problem by checking for root rot. 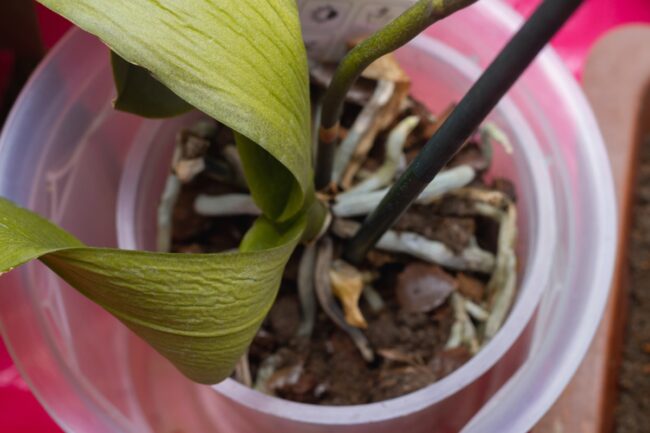 Q: I’ve heard that root rot is the primary cause of houseplant deaths. My plant is wilting, but I can’t tell if that’s a sign of underwatering rather than getting too much water. What does root rot look like?

A: Unfortunately, the signs of root rot, which include wilting along with discoloration and/or dropping of a plant’s lower leaves, do look similar to the symptoms of underwatering. There is a reason for that: A plant with rotted roots can’t take up water. Therefore, it too might die of thirst even though its soil is soggy.

What does root rot look like? Remove your plant from its pot and examine its roots. If they look dark brown and mushy rather than firm and white or tan as they should be, your plant probably is suffering from root rot.

What is root rot?

According to Wisconsin Horticulture’s Division of Extension, “Root rot is a general term that describes any disease where the pathogen…causes the deterioration of a plant’s root system.”  Because pathogens can be in the form of bacteria, fungi, or other organisms, root rot isn’t just one disease but a plant problem with many causes.

However, as with other maladies, these rots do the most harm to victims whose defenses already are lowered by poor conditions. So, they most often seem to strike houseplants in the appropriately described “dead” of winter when those plants already may be suffering from low light, low humidity, and more water than they can assimilate.

Related: The Best Houseplants for Every Shade of Green Thumb

Root rot is caused by the previously mentioned pathogens, especially fungi and parasitic oomycetes, some of the most common being Fusarium, Phytophthora, Pythium, and Rhizoctonia. Because those “baddies” prefer wet conditions, they most often attack plants that have sat for too long in soggy soil, either due to overwatering or to a lack of drainage holes in their containers.

The root cause of root rot generally is stagnation brought about by such gardening mistakes, which can doom succulent plants such as jades and moth orchids that don’t require much water but are flooded with an overabundance of it from their caring plant parents. Money tree root rot is also common.

Although some root rot symptoms mimic those of dehydration, others will indicate that something is rotten in the state of Denmark (or your dendrobium).

How to Treat Root Rot

When contemplating how to fix root rot, keep in mind that there is no cure once all of your plant’s roots have rotted. Should you see healthy roots left, however, you might be able to save your plant with the following root rot treatment.

How to Prevent Root Rot

Instead of watering all your plants on a preset schedule, check the soil of each one. Water the most moisture-loving plants such as ferns only when the surface of their mix is dry. Wait until that soil is dry 1 or 2 inches down to water plants such as succulents, which prefer more arid conditions.

Grow your cacti, succulents, palms, and citrus trees in one of the faster-draining mixes made especially for them rather than in standard potting mix. If you tend to overwater, you might want to place your plants in terra-cotta pots rather than plastic ones, since the more aerated soil in terra cotta dries faster.

Avoid pots that have no drainage holes, since excess water can’t escape from the soil. And don’t place your plants in containers too large for them, since that can cause their soil to stay soggy.

Good plant care habits also help prevent root problems. Always water with lukewarm rather than cold water and avoid fertilizing houseplants during winter, since chilly conditions or excess salts in the soil leave them more vulnerable to rot. Repotting generally should be done in spring rather than winter, and you should be careful not to damage your plants’ roots in the process, as such wounds can admit disease.

If you see fungus gnats flitting around your indoor garden, try to control them, since they may spread fungi from one pot to another. Avoid reusing old potting mix, since spores often linger in it for a long time, and always empty the saucers beneath your plants’ pots soon after you have watered them.

Related: 11 Reasons Your Houseplants Are Dying

Follow This Guide to Hoya Plant Care to Achieve Elusive, Starry B...

The Dos and Don'ts of Watering Plants

How to Inspect Houseplants So You Don’t Bring Home an Unhealthy o...

How to Grow Jasmine Plant Indoors

Master String of Pearls Care for the Ultimate Hanging-Basket Hous...

This Guide to Peperomia Care Covers Both Vining and Upright Varie...