How to Increase Humidity for Your Houseplants, Even During the Driest Days of Winter

Are you up in the air over what to do about your dry air? Try these solutions to help improve the health of your plants. 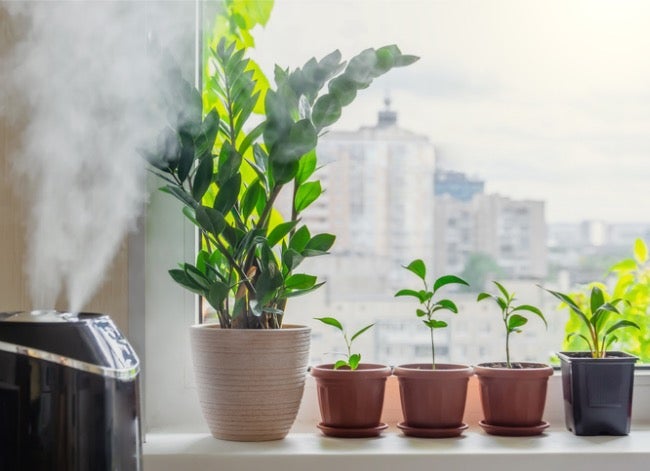 Q: I’ve heard that many houseplants are rainforest species that prefer high humidity. Can you give me some pointers on how to increase humidity for plants indoors during winter?

A: According to National Geographic, humidity simply means “the amount of water vapor in the air.” You can measure it with a hygrometer. When considering how to increase humidity for plants, keep in mind that they prefer more water vapor than people or electronics do. So you’ll want to aim for a number that will be acceptable to all. The Mayo Clinic considers the healthiest humidity level for humans to be somewhere between 30 and 50 percent.

Higher levels can cause condensation on surfaces and the buildup of mold, not to mention malfunction of electronics. So, an average humidity of about 40 to 45 percent is considered ideal. Although that might not be as much as your rainforest plants would prefer, they can live with it!

What is considered low humidity? The humidity percentage indoors during winter can descend as low as 10 to 20, drying your skin and nasal passages as well as causing the leaf tips and edges of your plants to brown and curl. If that is true of your home, there are several easy ways you can raise the amount of water vapor that both you and your plants receive.

Group your plants so they can help each other.

Plants actually add some humidity to the air themselves, both due to the water evaporating from their soil and to the process of transpiration, by which they release vapor through the “pores” on their leaves. So, if you group several of your plants together at an ideal site, such as near a large window, you will raise the amount of humidity around all of them.

To hike it even more, find ways to insert open containers of water into the mix to increase the amount of evaporation going on. For example, you could position a goldfish bowl complete with a finned occupant in your indoor garden, to add both a tropical touch and more humidity.

Related: How to Help Your Houseplants Survive the Winter

Place your plants in steamy settings to keep them contented.

Some rooms in your home tend to be more humid than others due to the amount of water run in them. The bathroom naturally rates the highest—with its typically small size and the number of showers, baths, and hand-washings going on there. The kitchen generally comes in second with its steam from tea kettles, instant pots, and dishwashing.

Therefore, ferns, which rate among the highest humidity-craving plants, probably will thrive best in the bathroom. Since they don’t require high levels of light, they shouldn’t mind the frosted privacy windows often found there. You also could place a few orchids on a windowsill above the kitchen sink to take advantage of the vapor that rises from the running water. A room that contains a large number of plants, such as an attached sunroom or greenhouse, also should be more humid simply due to their presence.

Set your plants atop humidity trays to raise their well-being.

A humidity tray for plants traditionally has been a long, shallow tray filled with gravel, into which you pour a little water that remains below the surface of the gravel. Plants placed atop a humidity tray like this highly rated option available at Amazon will benefit from water evaporating around them, raising humidity levels as it does so. That pebble tray for plants also eliminates the need for pot saucers since any excess moisture from watering can drain into it instead.

However, the water level must remain low enough that it doesn’t reach the drainage holes on the bottoms of the pots, or the plants may soak up too much moisture and “drown” (actually succumb to root rot) in soggy soil. Some modern humidity trays use rubber or plastic grids instead of gravel to hold the pots above the water. And the containers don’t necessarily have to be trays, since long, shallow, and watertight dishes or flats also will work.

Run a humidifier to run dry air out of town.

Humidifiers seem like the obvious solution to indoor dryness and range in size from a small plant humidifier to a whole-house type. You can even set a desired humidity level on many of them.

However, humidifiers occasionally cause more problems than they relieve. Those containing hard water tend to deposit a white film on surfaces, but the purchase of bottled water for them can soon grow prohibitively expensive. Also, if not cleaned and disinfected on a regular basis, humidifiers may emit dangerous mold and bacteria along with water vapor.

An indoor “bubbler,” which recycles the same water over and over, might also work as a humidifier for plants, since it will add some water vapor to the air. Get creative with choices like a decorative tabletop fountain, pet fountain, or fish tank filter. Again, though, follow care instructions to be sure the bubbler isn’t adding anything else to the home’s air.

Related: 14 Symptoms of an Unhappy Houseplant (and How You Can Treat Them)

Mist your plants to provide an indoor dew.

Although daily misting—spraying a fine mist of water onto plants or into the air above them—actually doesn’t raise the humidity levels around plants for long, most do seem to appreciate it. The closest thing to dew or rain they receive indoors, mist also helps prevent dust from building up on their leaves. However, you’ll want to avoid misting those with furry foliage, since their leaves will retain that moisture and could rot as a consequence.

Misting with cold and/or hard water can cause unsightly water spots on the leaf surfaces of many plants. So, if your tap water is hard, you’ll want to mist with bottled spring or distilled water instead, allowing it to sit until it reaches room temperature before spraying.

If you have plants in a tiered grow-light garden, you may be able to add plastic curtains to that setup. Roll them down at night to create temporary humidity tents. Or you can enclose plants that are humidity hogs inside glass terrariums instead. Since water vapor in the air tends to be lower the higher you set the thermostat, turning the thermostat down a bit at night to create better sleeping temperatures could also improve humidity levels.

Even if your attempts to reach the best humidity level aren’t highly successful, don’t assume that will doom all your plants. Those with the thinnest or narrowest leaves usually suffer most. However, many that sulk throughout winter begin to perk up once spring arrives and the furnace clicks on less often. Also, species such as cacti and succulents, which originated in desert environments, generally won’t mind the dry air at all.

How to Help Your Houseplants Survive the Winter

This Guide to Thanksgiving Cactus Care Will Liven Up Your Tablesc...

Easter Cactus Care: How to Get Your Holiday Succulent to Flower E...

Follow This Guide to Hoya Plant Care to Achieve Elusive, Starry B...