Have you cultivated all the common houseplants and are now ready for one of a different stripe? Try raising a zebra plant! 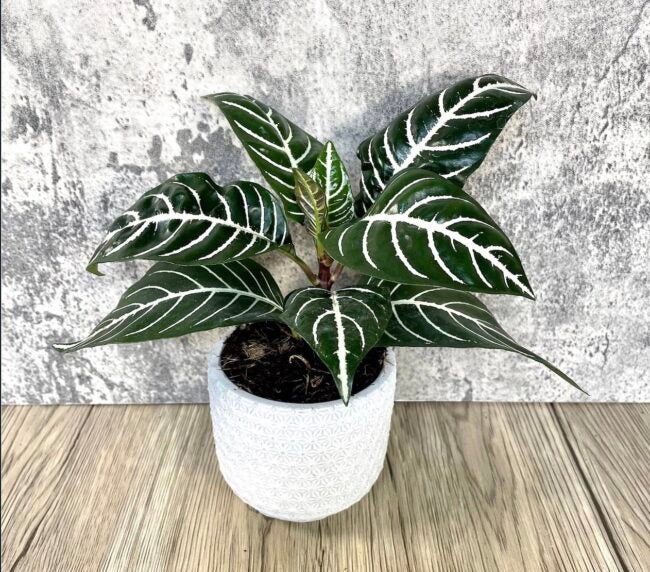 Although zebra plants (Aphelandra squarrosa) have a reputation for being among the hardest-to-please houseplants, their showy white-striped leaves and sunny bracts place them among the best houseplants, too. If zebra plant care proves tricky, just keep in mind that real zebras are difficult to domesticate, too!

Other houseplants that go by the common name of zebra plant include Dipteracanthus spp., Haworthia spp., and Cryptanthus zonatus. However, only care instructions for the Aphelandra zebra plant will be covered here.

Zebra Plant Care at a Glance

A member of the Acanthaceae family, the zebra plant only is hardy in USDA Zones 11 and 12. Although it can attain heights of 6 feet or so in the wilds of its native Brazil, growers often treat it with a growth suppressant so it seldom surpasses 2 feet when in a container.

The veins of its glossy and ovate dark-green leaves are heavily striped with white, and the zebra plant occasionally sends up stalks topped with clusters of yellow bracts—usually in autumn—from which emerge tubular yellow flowers. Each of those two-lipped blooms is considered a zebra flower. They don’t last long, but the more showy bracts persist for up to 2 months.

If you don’t like the veined markings on A. squarrosa, you might want to check out other Aphelandra houseplant species with different common names. After all, a zebra can’t change its stripes!

RELATED: What Does Root Rot Look Like in Houseplants?

Give zebra plants a light, fluffy, and mildly acidic potting soil such as an African violet mix with a pH between 6 and 6.5. If you don’t have access to African violet potting soil mix, try combining two parts of peat moss with one part each of vermiculite and perlite.

A standard potting mix should also work, provided that it isn’t too heavy. Plants that prefer to be kept constantly moist—including zebra plants—can rot easily in heavy soil or in too-large pots. Confine it to a container no larger than 6 inches in diameter with drainage holes.

The zebra plant prefers bright, indirect light. Over the summer months, give it as bright a location as possible without direct sun, since that will encourage it to set buds in autumn. The University of Arkansas Cooperative Extension advises, “The zebra plant requires average night temperatures above 65 degrees and light levels around 650 footcandles for about 12 weeks before flowers will form.”

One method of achieving that level of brightness without Old Sol is to place the plant in a south-facing window with a sheer curtain between it and the windowpane to diffuse the glare. Alternatively, set it on an east-facing windowsill where it receives sun only in the morning, since those mild rays often are considered equivalent to bright, indirect light. In winter, you can reduce its light to moderate (around 500 footcandles), but don’t leave it in the dark.

Zebra plants prefer to be kept evenly moist, so water them whenever the surface of the soil has almost dried out, preferably with lukewarm rainwater or bottled spring water rather than with hard tap water. After a zebra plant has flowered in autumn, cut back on its water and keep it at a temperature of 65 degrees Fahrenheit for a couple of months to give the plant a rest, but never allow all of its soil to dry out completely.

If the top of the plant wilts, it likely is parched and needs attention quickly. However, the symptoms of root rot, caused by too much water, sometimes can mimic those of drought.

RELATED: 23 Philodendron Varieties Perfect for Filling Out Your Houseplant Collection

Fertilize your zebra plant every 2 weeks from spring through autumn with a high-nitrogen plant food (one in which the first formula number is higher than the other two) at half strength. Refrain from feeding the plant during winter.

Since a zebra plant probably will spend most of its life indoors, you’ll want to leach its soil a couple times during summer to prevent fertilizer salt buildup. To do so, set the pot (without its saucer) in a sink with an open drain, and water the plant thoroughly until water runs from the pot’s drainage holes. After allowing the soil to drain for a half hour, repeat the process. Then make sure the soil drains thoroughly before you return the pot to its saucer.

The zebra plant prefers temperatures between 65 and 80 degrees Fahrenheit. Therefore, it is one of those plants that probably should stay indoors during summer rather than being moved outside, since—in much of the U.S.—nighttime summer temperatures often will fall below 65 degrees.

Because it enjoys high humidity, you might want to keep the plant in a bathroom, near a sink, or atop a humidity tray, misting it about once per day. Keep in mind that air conditioning reduces air moisture indoors, much as central heating does. So, if your plant’s leaves begin to exhibit brown tips, consider ways that you can raise the humidity around it.

Since it’s a good idea to cut back your zebra plant after it blooms, you might want to use the cuttings for zebra plant propagation. To do so, take 4-inch shoots from the plant’s tips, remove the lower leaves and dip the now-bare leaf nodes at the cuttings’ bases into rooting powder or liquid. Then, insert those bases into a potful of damp, sterile soil such as seed starting mix until the treated nodes are covered.

An essential part of learning how to propagate zebra plants is covering the cuttings and their pot with an upended plastic bag to retain humidity around those cuttings while they root. Use plastic straws or sticks to hold that plastic away from the cuttings and fasten the bag shut beneath the pot. Place it in bright, indirect light where the temperature hovers between 70 and 80 degrees Fahrenheit. Tip cuttings typically take 3 to 4 weeks to root.

RELATED: 10 Houseplants You Can Propagate the Fastest for an Ever-Expanding Indoor Garden

Zebra plants are nontoxic to both people and animals. However, the large bracts that make up part of a zebra plant flower might pose a choking hazard to toddlers or pets attracted by their bright color, who either pull them off or pick them up. So, keep the plant out of reach and snip off those fading bracts before they drop.

Alternatively, you could choose to be satisfied with your zebra’s stripes and not attempt to force the plant into bloom. Its sap can reportedly irritate skin, so wear gloves when pruning the plant and clean your pruning tools afterward.

Should your zebra plant exhibit the unhappy houseplant symptoms, give it a closer look. If its top leaves curl under and look crimped or crispy, they probably are receiving too much sun. The lower leaves might “curl up and die” due to dryness, drafts, or too much drenching.

Although real zebras’ stripes reportedly help protect them from insects, the plants named for the animal aren’t as lucky and may occasionally suffer damage from aphids, mealybugs, and scale. Due to the glossy nature of the zebra plant’s foliage, you should be able to knock off the aphids with strong squirts of water and scrub off the other insects with a damp paper towel.

If you just need some quick answers on how to care for zebra plants, check out the most frequently asked ones below. Should you be a zebra zealot and prefer more extensive information, consult the article above. However, you’ll first want to make sure that you are dealing with Aphelandra squarrosa rather than with one of the other zebra plants not covered here.

Q. How often should a zebra plant be watered?

Water your plant whenever the surface of its soil begins to dry out in spring through fall. Cut back in winter and water just enough to keep the soil from drying out completely.

No. The plants prefer bright, indirect light rather than sunlight.

Q. How do you make a zebra plant bushy?

After its flower bracts wither, snip them off and cut the plant back to its first two tiers of leaves to make it bushy.

Q. Should I trim my zebra plant?

Only prune off faded flower bracts, as described above.

Q. How big can a zebra plant get?

Although it may reach a height of 6 feet in the wild, it usually doesn’t grow taller than 2 feet in a container.

Q. Can you propagate zebra plants from leaves?

Most sources recommend that you use stem tip cuttings rather than leaves to propagate zebra plants. (See “Propagating Zebra Plants” above.)

Looking for more challenging houseplants to test your skills? Check out our guides on caring for avocado, bird of paradise, and croton.

It's Not Me, It's You: The 15 Toughest Houseplants to Keep Alive
Advertisement

Venus Flytrap Care 101: How to Grow This Carnivorous Plant Indoors

This Calathea Care Routine Will Challenge Your Green Thumb

The Best Online Gardening Classes of 2022