Although it boasts exotic “fine-feathered” blooms, you’ll need to learn the tricks of growing the often-obstinate bird of paradise plant to avoid it becoming Paradise Lost! 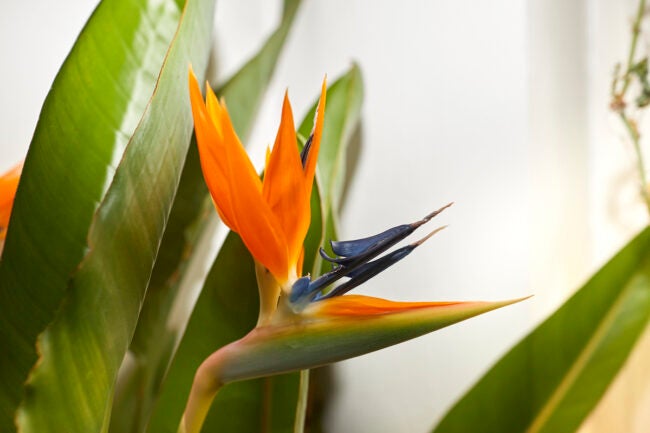 Bird of paradise care actually isn’t difficult, provided you have a sufficiently sunny window in which to place your tropical “bird.” However, a seedling or “pup” takes several years to grow large enough to flower indoors. And then, judging by the many querulous queries found about the plant on the internet, it still often fails to bloom.

So, if you prefer immediate results from the houseplants in your indoor Eden, purchase a full-sized specimen already in flower. Should you be a more patient and thrifty type who likes a challenge, start with the aforementioned pup or with seed.

Bird of Paradise Plant Care at a Glance

Native to South Africa and hardy in USDA zones 9b through 12, the bird of paradise flower (Strelitzia spp) resembles a bird’s head, with a horizontal “beak” (spathe) from which petals and sepals rise. On S. reginae and S. juncea, the petals are blue, the sepals orange, and the spathes a blue-green tone. Although both plants grow to 6 feet high, S. reginae has paddle-like leaves compared to S. juncea’s rush-like ones.

The blooms of S. nicolai, S. lba, and S. caudata exhibit blue petals, white sepals, and purple spathes, though the petals can be mauvish on S. caudata. However, Strelitzia nicolai (giant bird of paradise) grows to 30 feet, while caudata and alba top out at about 20 feet. All three have leaves similar to those of banana plants but with longer stems. The bird of paradise tree or shrub (Caesalpinia spp) is a different genus, not covered in this article. Appropriately enough, strelitzias are pollinated by birds, which land on petal “perches.”

Types of Bird of Paradise Plants

The strelitzia species plants described above offer plenty of natural variety in these tropical beauties. In addition, one hybrid stands out for its yellow highlights:

Because the bird of paradise enjoys well-drained, humus-rich soil, an organic potting mix should work well for it. If you prefer to create your own, Plantz Africa’s suggested potting soil for strelitzias includes three parts coarse bark, three parts compost, two parts garden loam, two parts sand, one part 3-1-5 or 3-2-2 organic fertilizer, and one-half part bone meal. (White bird of paradise care is similar to that of the more common orange variety, so its soil should be, too.)

When potting up your plant, place it so that the top of its root ball is just at the surface of the soil, since planting it too deep reportedly can prevent its blooming. Keep in mind that you are going to want to leave your bird of paradise in the same container for an extended period of time, since it blooms best when a bit potbound and with its roots undisturbed.

The bird of paradise reportedly needs at least four to six hours of sunlight per day to flower, with those blooms generally appearing in the cooler months, from autumn through spring. In the South, it often is planted in partial shade outdoors, where both its leaves and flowers grow larger than they would in full sun. However, indoors—especially in winter—it will need all the sun it can get.

For that reason, place bird of paradise plants near a large south-facing window or in a sunroom or greenhouse. If it has grown in a less well-lighted spot previously, be careful to expose it to full sun bit by bit so it won’t burn. Should you move it outdoors for the summer, place it in partial shade first and edge it out into the sun gradually.

Keep your bird of paradise’s soil evenly moist but not soggy during spring and summer, allowing it to dry out no more than an inch beneath the surface. Gradually reduce the amount of water you give the plant over the autumn months. During winter, don’t water the bird of paradise again until its soil has dried out almost completely, but not so much that its leaves begin to curl.

Even if the leaves look a bit misshapen, refrain from cutting off those that aren’t diseased or dead. A large and fully foliated plant is more likely to bloom than a puny and pruned one.

Feed your plant every two weeks during spring and summer with a water-soluble plant food with a balanced formula such as 20-20-20. Select the product’s strength recommended for houseplants. During autumn and winter, cut back to fertilizing once a month. After the plant reaches its mature height, some sources suggest that you reduce the amount of food and water it receives to encourage it to bloom instead of grow.

However, other sources recommend a sudden surge of fertilizer to spur flowering, namely feeding once a week, skipping only every fourth week, until the plant blooms. Just know that too much fertilizer can cause lots of soft new growth, which leaves an indoor plant more vulnerable to insect pests.

Related: The One Rule of (Green) Thumb When Decorating with Houseplants

Bird of paradise plant indoor care can be tricky, since the plant prefers to remain on the cool side during winter, with daytime temperatures between 65 and 70 degrees Fahrenheit and nighttime ones from 50 to 55 degrees. Since such low nighttime temperatures can be difficult to provide indoors, you might want to keep the plant in a sunny but constantly chilly spot over the winter where temperatures remain in the 50s. That could mean an attached but unheated sun porch or a cool greenhouse.

The plant enjoys humidity, and that naturally will be higher in rooms where the temperature is lower. However, if you must keep the plant in normal household temperatures all year, you’ll want to mist it at least once per day to help mitigate the dryness caused by home heating or air conditioning.

Propagating the bird of paradise can be difficult as seedlings generally take at least three years—sometimes up to seven—to bloom. However, asking a friend for a piece of his or her “bird” may not be the best idea either, since plants disturbed in that fashion often take a couple years to get back to flowering themselves.

Still, division is the best way to get a start that will bloom in the not-too-distant future. Since adult plants produce smaller plants called pups at their bases, you can separate one of those younger ones from its parent and pot it up in a container only an inch larger than its root ball on all sides. Keep it in bright, indirect light—rather than sunlight—for a couple months until it is well established before gradually moving it to a brighter position. Such a pup usually will bloom in two or three years.

According to the ASPCA, pets that consume strelitzia’s seeds and/or fruits (seed pods) may vomit or become sleepy after doing so. Since those seeds are pea-sized with fuzzy orange tufts attached, they also might pose a choking hazard to either pets or children. So, unless you want to harvest seeds, it is a good idea to remove the spent flowers from your plant to prevent seed pods from forming.

Because these large plants often are potted in heavy soil to keep them upright, be sure to position them where there’s no danger of them falling. Otherwise, your bird of paradise could become the plant from hell instead.

Bird of paradise leaves curling may signify that you aren’t watering the plant enough. However, such symptoms also can mean that you have overwatered it and its roots are rotting, since that, too, will prevent it from taking up water. Alternatively, that curling could indicate that the plant is standing in an icy draft from an ill-fitting window. The foliage generally will tolerate some freezing, perhaps down to as low as 28 degrees, but such temperatures can kill buds and flowers.

As for insects, the bird of paradise may be afflicted by such common houseplant pests as scale, aphids, mealybugs, and spider mites. However, most of those can be wiped from the plant’s large and leathery leaves with a damp cloth or sponge, though you may have to scrub a bit for scale.

If your bird of paradise doesn’t appear to consider your home a paradise, you can find some quick answers to your most urgent questions and answers below.

Q: How much sun does a bird of paradise need?

The plant reportedly requires at least four to six hours of sunlight per day to bloom.

Q: How often should I water my bird of paradise?

Water it enough to keep it evenly moist during summer, but allow it to almost dry out before watering it again during winter.

Q: Can the bird of paradise be in full sun?

Yes, the plant usually prefers as much sun as it can get when grown indoors.

Q: Does the bird of paradise like coffee grounds?

Although coffee grounds are a good addition to compost, they might block air from the soil and cause mold if used on houseplants. They also might draw fruit flies.

Q: Do birds of paradise multiply?

Yes, the plants will produce “pups” (young plants) around their bases.

Looking for more colorful or blooming houseplants? Check out our guides on caring for croton and peace lily.

How to Grow Lantana
Advertisement

The Best Plant Delivery Services of 2022

10 Variegated Houseplants That Pack the Most Visual Interest

Master String of Pearls Care for the Ultimate Hanging-Basket Hous...