Expanding Foam vs. Concrete Fence Post: Which Option is Best for Your Project?

Find out the difference between expanding foam and concrete fence posts, and learn when to use each setting method. 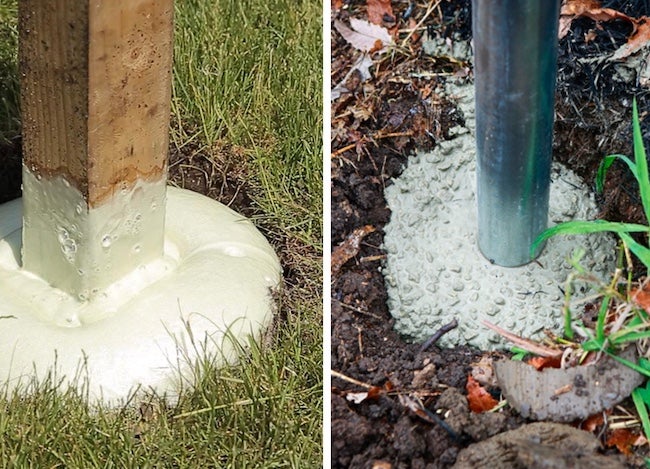 Concrete in some form or another has been around for thousands of years. The modern cement-based version first appeared in the mid-1820s, and generations of DIY enthusiasts and professionals have used it. It is inexpensive and, when mixed properly, can be very durable.

Expanding foam has been around since the 1950s, but expanding foam post hole filler is a relatively new product. We’ve taken a closer look at the properties of both so we can help explain and settle the expanding foam vs. concrete fence post argument.

Concrete is the traditional material used to set fence posts.

Concrete is made by mixing cement with water, and adding an aggregate that’s usually sand, gravel, or a combination of both. The proportions are important. It might often seem as if it’s thrown together with little care, but the wrong mix can be weak and prone to crumbling or cracking. When made properly, it can last 50 years or more.

However, concrete is widely criticized for its environmental impact, both in terms of production of the components, and contamination of the soil when used. To set a fence post so it remains sturdy, a hole 1/3 of the post height is recommended. That means much more concrete is necessary than seems evident from the surface. Many people would prefer an alternative, if it was available.

Expanding foam is popular as a gap filler and insulator. It is usually provided in an aerosol can or will be pumped using dedicated equipment in commercial applications. Expanding foam for fence post fixing is a two-part polyurethane resin supplied in a lightweight pack. The two components react when mixed.

While it is a type of plastic, makers of polyurethane products claim they are much more environmentally friendly than both petroleum-based products and concrete. Less energy is used in their production. Fewer raw materials are required, and less waste is produced. Technically-speaking, they do not damage endocrine and hormone systems, and fence post mix does not contaminate the surrounding soil. Post hole foam does not break down and risk polluting ground water, either.

Concrete is much heavier but costs less than expanding foam.

When setting fence posts in concrete, experts recommend using at least two 50-pound bags of store-bought mix for a 4×4-inch post in a hole 2 feet deep (available at The Home Depot). Buying concrete like this is a good idea because it takes the guesswork out of preparation. Just add water and pour.

By contrast, the equivalent pack of a popular product like Sika fence post mix (available at The Home Depot) weighs just 2.5 pounds! Using this as an example, it’s easy to picture just how much these products expand.

However, the fact that polyurethane foam is much lighter and considerably less bulky is not reflected in the price. Typically the cost is around three times the cost of equivalent concrete mix.

Related: Solved! How Much Concrete Do I Need Per Fence Post?

Concrete takes longer to fully cure, and foam sets in much colder conditions.

When using concrete as a post hole filler, it’s usually necessary to provide some kind of temporary support, because the concrete won’t normally set sufficiently for the post to stay upright on its own for at least 30 minutes. It can take several hours until it feels properly hard on the surface, and anywhere from 7 to 30 days until it is fully cured.

Expanding foam post mix sets hard enough to leave the post unsupported in just a few minutes. It can be fully cured in a quarter of an hour. It’s also much less dependent on temperature, which is different than concrete that should never be made if there’s a risk of freezing. If ice forms in the concrete mix’s water, it will destroy the structure.

The only downside with the speed of expanding foam is that you need to be fully prepared in advance, with everything in place. Concrete gives you a little time to fix minor errors, or straighten a post that is leaning slightly. Expanding foam does not.

A variety of brackets and fence post repair spikes can be used to secure wooden fence posts that have been damaged, or where there is some decay. Concrete provides a strong support for these products.

Expanded foam has nowhere near the density or rigidity. It is plenty strong enough to hold the post up under normal circumstances, but has little structural strength. Hammering a spike into it would do more harm than good, and makers warn against using expanded foam in load-bearing situations. For example, concrete remains the better choice for large driveway gates, but at least one manufacturer has a structural version of expanding foam at the testing stage.

As is often the case with these kinds of debates, there is no single answer to the expanding foam vs. concrete fence post question. For lightweight fences, or in locations not subject to high winds, expanded foam is quicker and easier to use. If structural strength is an issue, concrete is still the better choice.

Related: The Dos and Don’ts of Using Expanding Foam Insulation Around the House

How Much Does a Chain Link Fence Cost?
Advertisement

How Much Does Fence Installation Cost?

The Dos and Don'ts of Vinyl Fence Installation

How to Attract Bluebirds to Your Backyard: 12 Tips That Work