The Hidden Costs of Windows 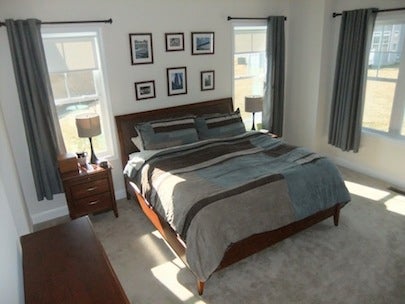 One benefit of moving to suburbia from New York City and building a new home was getting to customize our space. At the top of our must-haves list for the house was what we’d had too few of in our old apartment—windows. You have to understand, city life can be dark. In many midtown apartments, you’re lucky to have more than three or four windows, and even luckier if they don’t face an air shaft. So when we were choosing options for the house, we chose light, light, light!

In retrospect, I see that we could have been more judicious. We live on a lot with no trees, and the original house plan already included a lot of windows. The rooms in which optional windows were available each had enormous windows in them already.

During construction we realized the extra window we’d chosen to add in the playroom/study would make the room inflexible as a guest room in the future, so we asked the builder to cover it up (ack! $450 down the drain).

I wish we’d had a similar realization about the master bedroom. Instead, we put in two windows more than originally planned. Doing so has allowed for a lot of light, but it’s a room for sleeping! It doesn’t really need more light than the original plan would have admitted.

Not to mention, if it weren’t for the ‘extra’ windows, we’d have more flexibility in furniture placement. As it is, there’s only one place for our king-size bed. Had we passed on the windows, we’d be able to shift the bed farther down the wall to create a cozy sitting area.

And we would have saved ourselves a lot of money.

Knowing what I know now, here’s my list of things to consider when deciding on windows in new construction:

1. More windows means less wall space for furniture. Plus, most windows in new construction are quite long from top to bottom. Not much will fit underneath.

2. Every window is an opportunity for heat loss. You can buy energy-efficient windows, but no window will keep the heat in your house like an insulated wall.

3. Think about what the room will be used for now and in the future. Will a lot of light enhance the space? Or will more windows hinder using the room for something else later?

4. Direction matters. Do you really need extra windows facing east in a bedroom? If you love to get up with the sun, that’s perfect, but think about it.

5. Every window will most likely need some kind of window treatment, which can be a big expense. And custom windows call for custom window treatments, which carry an even bigger price tag. With stock windows, you have a better chance of being able to buy pre-fabricated treatments from a large home center, department or discount store.

I love my master bedroom, including the light from the windows, but if I had it to do over, I’d probably save the money and give myself more flexibility with furniture—like a cozy chair and ottoman to snuggle into with a book.

For more on windows, consider the following Bob Vila articles:

The 25 Most Dangerous Plants for Your Pet