Solved! What is a Convection Oven?

Convection ovens cook faster and more evenly, meaning you’ll have a perfectly cooked dinner on the table sooner than with your conventional oven. 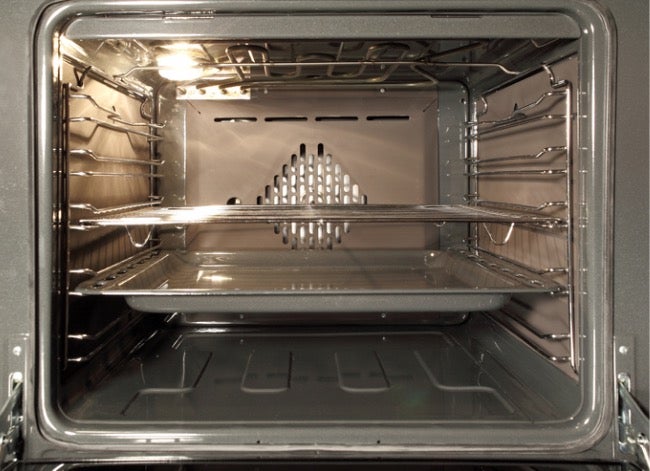 Q: It’s time to replace my old oven. I see a lot of new ovens have a convection function, but I’ve never cooked with anything but a conventional oven. What is a convection oven, and is it worth it to buy one?

A: Convection ovens, which circulate hot air around the food while it cooks, have gained in popularity during recent years. They cook food faster, more evenly, and at lower temperatures than conventional radiant ovens, offering not only convenience but also reduced energy expenses. Add the fact that you can cook almost anything in a convection oven that you would cook in a standard oven, and it becomes clear why convection ovens are making the jump from restaurant kitchens to homes.

There are many types of convection ovens available, including countertop, toaster oven, microwave/convection hybrids, and electric and gas kitchen ovens. But all operate on the same basic principles. In most of these ovens, you can switch off the convection fan if desired for conventional cooking, adding to their versatility.

A convection oven is all about circulation.

What sets a convection oven apart from a conventional oven is the addition of a fan positioned at the back of the appliance to circulate the hot air within the oven cavity. This helps eliminate hot or cool spots, and leads to more even cooking and browning. By continuously blowing the heated air over the food, cooking time is typically shortened by up to 25 percent, and the oven temperature can be lowered.

RELATED: The Best Built-In Microwaves for Your Kitchen

In a conventional oven, the heating element is at the bottom of the appliance. As the air nearest that element heats up, it rises, creating warmer zones at the upper and lower part of the oven. That’s why you’ll find that if you place cookie sheets on each rack within the oven, the cookies on the top and bottom racks will cook faster than the cookies on the middle rack. Furthermore, along with the slight differences in temperature within the oven, rising hot air can become trapped beneath your roasting pan or cookie sheet, leading to further unevenness of the temperature.

By contrast, while convection ovens also typically have a heating element at the bottom, once you switch the convection setting on, the fan mounted on the appliance’s back wall keeps the air circulating evenly throughout the entire oven, preventing the accumulation of heated air near the top, and removing trapped pockets of air underneath bakeware. Thanks to this, your food cooks evenly no matter which shelf it’s placed on, and you won’t have to worry about over- or under-cooked spots in your meal.

A convection oven is great for roasting, baking, and toasting.

While you can cook anything in a convection oven that you’d cook in a conventional oven, certain recipes are particularly suited to the circulating air that defines this appliance. Large cuts of meat, such as turkeys, beef roasts, and hams, cook beautifully in a convection oven, giving you a crispy, golden outside and a perfectly done center. The convection setting is also the best choice for roasted vegetables, casseroles, toasted nuts, granola, pies, or multiple trays of cookies. For the very best results, choose a pan or tray with the lowest sides possible while still containing the food, as this allows for the most even air circulation.

There are a few things best left to the conventional oven, however. If you are baking bread, custard, cake, a soufflé, or other batter-based dishes that rise significantly during the baking process, it’s best to switch off the convection setting, and cook without the fan. The dry, circulating air of a convection oven can cause these foods to rise unevenly, or turn the tops of delicate baked goods into a hardened crust.

Thanks to their speedier cooking process, convection ovens require less energy from start to finish than do conventional ovens. This can really add up to significant cost savings in a commercial kitchen, where the oven is on all day long, but also helps conserve energy and lower your utility costs even in a small home kitchen. In fact, as a general rule, you can expect your convection oven to use 20 percent less energy than your conventional oven, although of course, the number can vary somewhat between different models of oven, as well as different cooking techniques.

However, if you overcrowd a convection oven by filling every rack to its limit, you’ll slow down the cooking time, as the air won’t be able to circulate freely, and will thus wipe out your energy savings. So be mindful of space when cooking; there needs to be enough room within the oven for the hot air to circulate freely and evenly around all cookware.

RELATED: Solved! When to Use Your Oven’s Confusing “Self-Clean” Function

You may need to adjust recipes.

Another method of modifying recipes from conventional to convection is to shorten the cooking time, typically by around 25 percent. So if grandma’s pot roast took four hours, expect the same size roast to take roughly three hours in a convection oven.

You should check for doneness sooner when using a convection oven.

Just like your conventional oven, you’ll need to preheat your convection oven before putting in your food. But because a convection oven cooks considerably faster than a conventional oven, once you set your food inside, you’ll want to start checking on it sooner to avoid overcooking. This is especially true if you are cooking a small roast, casserole, or other dish; the smaller the item, the faster it will cook.

Play it safe by starting to check on your food at least 10 minutes before you expect it to be finished—better safe than sorry. This is true even if you’ve reduced the temperature by 25 degrees, as recommended. Set your kitchen timer to help you remember, and enjoy your perfectly cooked dinner.

The Best Toaster Ovens for the Kitchen
Advertisement

The Best Microwave Convection Ovens of 2022

The Best Wall Ovens for the Kitchen

The Best Electric Ranges of 2022