If you’re wondering when to plant roses in your climate, these answers can help so that everything will come up roses! 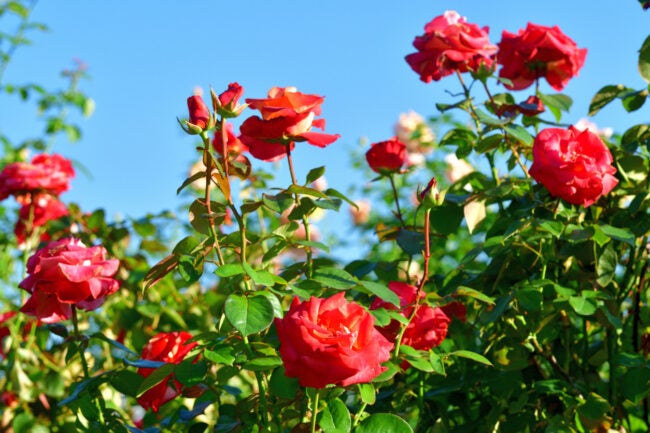 Q: I’m planning to set out some rose bushes this year, but I’m unsure about when to do so. What is the difference between bare root and container varieties, and when is the best time to plant roses?

A: Mailed when they still are dormant and without soil on their roots, bare root roses don’t yet have foliage that can be damaged by frost. As a result, they can be set out earlier than container types, which are already growing in pots of soil.

The best time to plant roses will vary depending on your climate, as indicated below. If you are purchasing bare root rose varieties from a mail-order company, the bushes will be shipped to you at the proper planting time for your zone. Wait until your last spring frost date has passed to set out already leafed-out roses in containers.

The best time to plant roses in Northern regions is in the spring from April through May.

April through May is usually the recommended bare root rose planting season for the northernmost areas of the U.S., from USDA Zones 1 through 5. Ideally, that would be the first couple of weeks in April for Zones 4 and 5, and the first couple of weeks in May for Zones 1 through 3. Wait to plant container roses from a nursery until the danger of last spring frost has passed in your area.

The best time for planting rose bushes also depends on when your garden plot has dried out enough for the soil to be crumbly. Otherwise, that soil—especially if it contains clay—is liable to clump into hard balls.

If you still have snow on the ground when your bare root roses arrive, don’t panic. You can place them in a pail in a cool, dark place for a couple of days with water covering their roots. If that proves not to be long enough, move them to a container with drainage holes and cover the roots with lightly damp sawdust or compost.

In Southern states, you can plant roses as early as January through March if you work the soil.

Areas for which January or early February rose bush planting often is recommended include Zones 9 through 13, which encompass the southernmost areas of the U.S., as well as Hawaii. Gardeners in Zone 8 should wait until late February, with early March being the optimal planting time for Zone 7 and late March for Zone 6.

However, when to plant roses can vary from year to year, depending on how seasonable or unseasonable the weather is. If you must wait, you can always “heel in” the roses for a few days by digging a trench in a well-drained location, placing the roses in it, and covering their bare roots with slightly moist soil or compost. Don’t leave them in that trench too long, though, or they might “plant their feet” there.

You may also be able to plant roses in late fall about 6 weeks before the first frost in your region.

The question of when to plant rose bushes can have an entirely different answer in states where there is virtually no possibility of the temperature dipping below -10 degrees Fahrenheit during winter. There, from USDA Zones 6 through 13, roses can be set out in autumn as well as in spring. For autumn planting, aim for a date about 6 weeks before your first fall frost date—in climates that have frost—to give the plants time to get established before cold weather sets in.

However, keep in mind that some companies recommend only spring planting in zones lower than 9 for the most tender roses. Those include China roses, tea roses, and noisettes.

Avoid planting roses in midsummer, when heat waves and droughts are common.

The best rose bush planting season definitely is not midsummer, when conditions most likely will be hotter and drier than they were in spring. Such weather places unnecessary stress on newly transplanted shrubs that haven’t had time to get established yet. Fortunately, bare root roses generally aren’t available at that time of year.

Although midsummer isn’t the best time for planting container roses either, they should tolerate such a move better, since they already are growing in soil. Except in the warmest or most southern zones, if you are careful not to disturb the soil already around their roots too much and you keep them well watered once they are in the ground, they will probably survive. However, they may be inclined to wilt a bit at first.

Plant roses where they will receive at least 6 to 8 hours of full sun per day.

The question of where to plant roses also may depend on your climate. Choose a spot with well-draining soil where the bushes will receive at least 6 to 8 hours of sun every day, preferably beginning in the early morning so that they dry off quickly.

In the North, aim for sun all day. In the more sizzling South, you might need to place your roses where they receive plenty of morning sun but some shade in the afternoon. In either case, the bushes will require ample air movement around them to prevent fungal disease. However, avoid placing them in sites so open that the roses will be constantly buffeted by the wind.

Related: Solved! When to Prune Roses

Solved! When to Prune Roses
Advertisement

How To: Care for Roses

How to Grow a Cut Flower Garden at Home