Consult our list for all the tools you'll need to deal with your plumbing system. 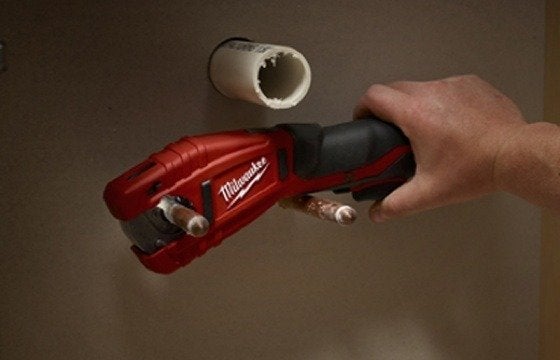 Plumbing tools are a diverse lot, as the trade requires cutting, fit­ting, and fastening, and even a bit of carpentry when installing new lines and closing up around them. A basic knowledge of the tools we’ll talk about here will allow you to perform basic repairs, as well as install new fixtures. Other tools like the drill, hole saw, reciprocating saw, chisels, hammers, and numerous others, are often needed by the plumber, too. The homeowner-plumber must be able to move swiftly from one trade to another, depending upon the needs of the particular task immedi­ately at hand.

Not all piping is copper these days. Iron pipes are found in older structures, and their thread fittings require different techniques from the soldered sweat fittings that join copper elements. In many places today building codes allow for the use of plastic pipe for waste lines or even for supply lines. We’ll talk about copper, iron, and plas­tic, too.

Tubing Cutter. These clever tools make neat, square cuts of plastic, copper, brass, or thin wall steel or iron tubing. They resemble adjustable wrenches in that they have one fixed jaw and another that moves. The resemblance ends there, however, since these tools have cutting wheels and rollers instead of flat or serrated jaws.

To use a tubing cutter, the jaw is opened to allow the end of the pipe to be inserted. The cutting wheel is positioned at the point along the pipe’s length where the cut is to be made, and the adjusting screw tightened until the wheel and rollers grip the pipe. Don’t over­tighten the jaws, since they can crimp the pipe.

The cutter is then rotated around the pipe. Check that the score line the cutter has made forms a complete circle, and doesn’t tend to spiral offline, as it will if the pipe cutter isn’t set squarely onto the pipe. To cut through the pipe, tighten the adjusting screw a fraction of a turn after each revolution; then rotate the pipe, tighten the screw further, and repeat the process until the cut is complete.

The inside of freshly cut copper and other soft pipe should be reamed clean of burrs and shavings. Most tubing cutters have a ream­ing device mounted on the back of the tool for this purpose.

Pipe cutters function in much the same way as tubing cutters do, but are made of steel and are designed for cutting pipes with thicker walls. Instead of having one cutting wheel and two rollers, like tubing cutters, pipe cutters have three cutting wheels. For those of us who run the occasional copper or plastic supply pipe, a simple and inexpensive tubing cutter is quite adequate, one that will cut copper, aluminum, or brass pipe of diameters up to an inch or an inch and a half.

Propane Torch. Sometimes called a blowtorch, this tool is small, light, and port­able. Older models relied upon kerosene, but much safer and easier- to-use propane-fueled models are now the rule.

The propane torch can help perform a variety of tasks, but its principal use is to join metals by soldering or brazing. It is also used in stripping paint (the heat softens the paint; wear a respirator if you are in doubt as to whether the paint is lead-based) and in removing old putty from window sash when replacing a windowpane. Attach­ments can be fitted to the nozzle to focus the flame tightly for precision soldering or to spread it for paint stripping or removing resilient tile. The standard nozzle produces a flame suitable for sweat-fitting domestic water pipes.

Canisters of fuel can be purchased separately; in them the pres­sured, liquid propane is stored. When it is released via the valve and nozzle, the gas vaporizes and can be lit to form an even flame. The intensity of the flame is controlled by the valve, which allows more or less gas to escape.

Small canisters of propane have the brass burner and valve as­sembly screwed directly onto the mouth of the container. The tank then doubles as a handle during the heating process. Other models are available that have larger tanks that are connected to the nozzle via a hose. These are considerably more expensive, but the nozzle is lighter and easier to use in the cramped quarters that so often are the rule in plumbing.

When used and stored properly, propane torches pose few risks. But they must be used with care.

Always turn the torch off immediately after use. Never allow its flame to point in the direction of any flammable material. Store the torch carefully, away from any source of heat. Discard empty con­tainers properly (many suppliers will accept them as returns).

Pipe Wrench. The pipe wrench (recognizable to some as a monkey wrench) is an adjustable wrench generally used to grip pipes or rods. The head jaw is at the end of the handle, while the hook jaw hangs from a pivot that slides along the back of the handle.

What distinguishes the pipe wrench from other adjustables (and specifically from those more properly known as monkey wrenches) is the pivot. Unlike adjustable wrenches, the pipe wrench’s serrated jaws are not fixed parallel to one another, but when pressure is put on the handle, the pivot causes the jaws to close slightly. This clench­ing action allows the tool to grip round workpieces. Pipe wrenches are made of steel with hardened jaws.

Pipe wrenches are intended to be used to turn a pipe or other round workpiece in one direction; in order to change direction, the wrench must be removed and the position of its jaws reversed.

The basin wrench has the head of a pipe wrench and the neck of a giraffe. It’s designed to reach up behind the bowl of a sink and con­nect or disconnect the nuts that fasten the faucet or other fittings that provide water to a sink.

The pipe wrench jaw is mounted at right angles to the length of the handle; at the opposite end, there is a T bar for torquing the tool. The mechanical equivalent of a periscope, in a sense the basin wrench allows you to work where your hands can’t reach. It’s a rela­tively inexpensive tool that will quickly prove its worth when retro­fitting kitchen faucets or other sink fittings.

The Plunger. Even if you never plan to do any sweat fittings or plumb any plastic pipe, the plunger is a tool that may have a role to play in your household. It doesn’t have anything to do with running new pipes; its job is to help clear blockages (i.e. unclog toilets) in old ones.

The plunger consists of a molded rubber cup mounted on the end of a wooden handle. Sink plungers have a simple, hemispherical cup; those designed to unclog toilets have a conical extension at the mouth of the cup that inserts into the throat of the toilet. This helps assure a tight fit and adds force.

To use a plunger, position its cup over a sink, tub, or toilet drain. Fill the sink or other receptacle to a depth that covers the cup. If there is an overflow drain in the sink or tub, block its opening with a rag or a strip of duct tape. The cup must make contact with the sink around its entire perimeter. A coating of petroleum jelly around the rim of the cup may help insure an airtight seal.

Pump the handle downward, collapsing the cup. This forces air into the pipes, increasing the pressure on the blockage, which may break up the material that is clogging the pipe. Work the tool up and down five to ten times. Repeat again if necessary.

If the material still has not been loosened, you may need to resort to the drain auger.

The Drain Auger. The drain auger is used when a plunger is unable to open a block­ed drain line. It consists of a twisted wire hook and auger fastened to the end of a steel spring coil. More expensive models come with a crank and with a storage canister into which the length of the coil can be withdrawn, while simpler varieties are wound by hand into a coil. Coils of various diameters are sold, but three-eighths and half- inch coils are usual.

To use the drain auger, the end is inserted into the pipe. If your blockage is in a sink, remove the trap beneath the sink first. That way you can be sure the clog isn’t simply at that point and easily removed by hand. By removing the trap, you also open up a more direct access to the drain lines beyond. (One suggestion: when you remove the trap, position a pail or other watertight receptacle beneath it to catch the water contained within.)

Push the auger in until it reaches the blockage. One of this tool’s nicknames, the snake, describes the way it twists and weaves, follow­ing the bends in the pipe.

At one or several points, it may refuse to travel any further into the pipe. That doesn’t necessarily mean you’ve reached the blockage, but the end of the snake may have reached angled fittings and may need a little persuading to continue its journey. Try twisting the snake in a cranking motion, using the built-in cranking handle that can be tightened (using a set screw) to the length of the coil. If your snake doesn’t have a crank, position one hand on the snake where it enters the trap. With the other, grip the snake about eighteen inches further along its length. Then crank it, rotating your hands as if you were pedaling a bicycle.

The cranking motion should be in a clockwise direction (when looking into the end of the pipe). If you have reached the blockage, the turning snake will engage the blockage, and the twisted steel auger at its end will bore into the material, either causing it to break up or allowing you to pull it back out. If the resistance you felt was not the blockage but a fitting, the cranking motion, together with some pushing pressure, will allow the snake to advance in the drain line.

What Tools Do You Need for PEX Plumbing Projects?
Advertisement

How to Turn Off Water to Your House