Blend Your Deck into the Landscape

Plantings and other techniques create a seamless flow between deck and landscape. 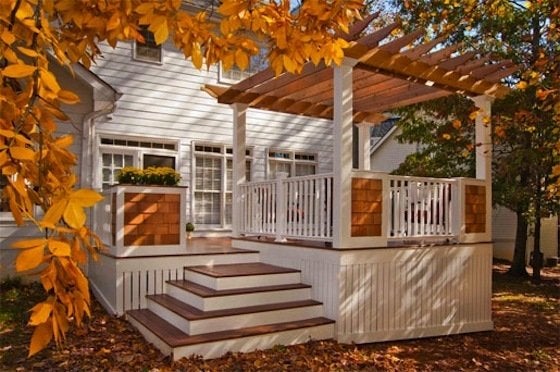 Outdoor decks connect the interior of a home to the natural world. “Decks are the first transition from the inside of the home to the landscape,” notes Rob Tilson, vice president of information and practice for the American Society of Landscape Architects. An effective landscape plan should utilize layout, color, natural materials, and hardscape features to create continuity and transition.

Landscaping Decks of All Levels
An on-grade deck, or one that is built at ground level, offers the greatest possibilities. Begin by bringing the same softscape amenities onto the deck bed that you’ve used to accessorize the rest of your property. Michael Lawrence, a Vermont-based landscape architect, likes using lots of oversized containers for planting everything from perennials to small trees. Consider the unusual: A potted Japanese maple makes a dramatic statement, but will need special care in harsh environments. “Investigate whether a local greenhouse can store it over the winter,” Lawrence suggests.

Work with a single color palette or flowers from the same family as you build your garden out from the deck perimeter. Lawrence suggests focusing first on what you love, keeping in mind that more meticulous maintenance is required the closer the garden is to the deck. If insects are a concern, avoid shrubs and flowers that attract bees. On the other hand, some of these varieties attract hummingbirds and butterflies.

Vary the heights of plantings so that they make a smooth transition from deck base to the soil below by planting taller perennials close to the deck and gradually decreasing the height as the garden merges with the grass. This same philosophy works well with a near-grade deck — one that sits just several steps above the adjoining property. Use latticework as a backdrop to close the gap between the deck base and the soil, and plant taller perennials or annuals closest to the lattice. Stagger plantings by blossom time to encourage multi-season color if your climate will allow for it. Creating pockets of color and differing leaf textures distracts the eye from straight lines and vast forms.

Deck Transitions
Decks can also serve as the gateway to a more elaborately designed property. An English garden effect is created by using paths, benches, and bird baths. A Japanese-influenced garden begins on the deck with close attention to scale and the blending of diverse materials. Consider stepping off onto a massive, beautiful slab of granite. From that stone, create a narrower path. Vary accent pieces by height, visual weight, color, and material. “The Japanese use an interesting combination of materials,” Lawrence notes, pointing to their preference for natural elements like stones, water, and wood.

Fountains, goldfish ponds and other hardscape incorporated into the deck structure can serve as the prelude to what lies beyond. The key is in creating a soothing, fluid line, rather than an abrupt change. Again, Lawrence calls attention to the Japanese. “They never go straight from outside to inside, but make subtle changes that move away from a busy life to a more peaceful life.”

The View from Below
An above-grade deck benefits most from a graceful descent. Replace narrow tread-and-riser stairs with a wider staircase and landings for a smoother transition to the yard. A standard 8-inch rise can be replaced with a 5-inch and the tread extended to 12 inches. Changing the staircase makes it easier to carry food and beverages from the deck to the yard and visually opens the deck out onto the natural world. A five or six-foot wide step is big enough to incorporate potted flowers or built-in plant boxes along the edges. Landings can hold large container plantings or a potted tree.

The bottom of story-high deck can be left open and framed with trellises. Climbing plants like clematis or morning glories add beauty and color while softening the angle where the posts meet the deck, giving the illusion of an archway. Add English Ivy to window boxes placed on the deck railings above to drape down and meet the greenery below. Cafe tables and chairs on grade make an inviting sitting area with a completely different ambience from that of the deck above.

Make a Splash! 10 Stunning Backyard Ponds to Enhance Any Landscape