Bamboo provides a quick-growing evergreen screen and adds glorious character with delicate leaves and substantial culms or canes, but research and commitment are needed to maintain the right plant for your yard. 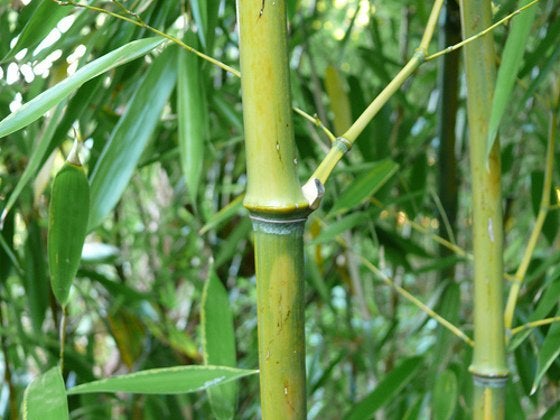 Clumping and Running Bamboo
Bamboo is a member of the grass family, with more than 200 species available in the U.S. and 1,300 worldwide. Its leaves can range from over 55 inches long to merely a few inches in length. Its culms, or trunks, can be black, green with yellow stripes, or yellow with green stripes, and vary from the size of a thin wire to about 14 inches in diameter.

At its most basic level, bamboo divides itself into two categories: clumpers and runners. The underground root structure, rhizome, determines its classification. Some plants are even a mixture of the two. A clumper’s rhizome typically runs a short distance before sending up new culms. The distance it travels is determined by its genus. Clumping bamboos are usually tropical plants that don’t like temperatures dipping into the 40s. Unlike clumpers, runners are temperate plants whose rhizomes “run” far and wide. Running bamboo can send root offshoots some distance before sending up a culm, which is why they are sometimes called invasive or hard to manage.

Bamboo Requires Research
Bamboo’s shortcomings are usually the fault of the gardener, says Adam Turtle, a bamboo consultant who operates Earth Advocates Research Farm in Summertown, TN, a wholesale nursery specializing in landscape-grade bamboos. Those who plan to add bamboo to their landscape or garden should become informed before they purchase and plant to avoid unwanted consequences.

Bamboo is not for the lazy, the beginner gardener, or anyone who doesn’t wish to do homework, says Turtle. He suggests that gardeners considering bamboo for their yards consult the American Bamboo Society for information. Bamboo varieties range in size from groundcover to soaring plants several stories high. Even more confusing, what might work in the north-central U.S. would not be happy in the southeast, says Ted Meredith, a bamboo enthusiast and author of Bamboo for Gardens by Timber Press.

Gardeners must be prepared to cultivate and maintain their bamboo. Problems arise when the home gardener does not understand the variety he or she has planted. Bamboo with deeper-growing rhizomes or high maintenance requirements may have runners that spread and become difficult to control or eliminate.

Bamboo Specifics
While some bamboos prefer shade, others like sun. Some are hardy to 20 below while others cannot tolerate frost. Most cannot tolerate drying winds. As a grass, bamboo appreciates garden soil that contains organic matter and is well irrigated. A pH of 6 to 6.5 is preferred. It will not tolerate wet feet or saturated soils.

Deer won’t bother bamboo, which is a plus. Bamboo’s only true pest is the bamboo mite, which is more of a problem in the western U.S., where it’s dry, than on the east coast, according to Meredith. Bamboo mites can be difficult to control, so it’s best to avoid the problem by isolating and inspecting all new bamboo purchased. While the mites won’t kill the plant, they will leave a pattern of yellow damage on both sides of the leaf that can look like variegation.

Bamboo exhibits pretty amazing growth habits. “If you want an affirmation of growth in the spring, it’s a pretty dramatic expression,” Meredith says. A bamboo culm will attain about 90 percent of its height in 30 days, he says, and that applies equally to three-foot or three-story plants. Meredith has seen a culm grow 14 inches in a single day!

Once the bamboo culm attains its full height, side branches appear first, followed by leaves. Keep bamboo clipped to the height you desire. Meredith maintains his front-yard bamboo hedge at eight feet to block noise and wind.

Controlling Bamboo
Since most of the bamboo grown in the U.S. tends to be running bamboos, it’s important to put down barriers. For a privacy screen, Meredith suggests creating a barrier of 60 mil high-density polyethylene buried 24 inches into the ground along the fence line. It’s important to check barrier health each year to avoid penetration and escaping rhizomes.

Another way to limit growth is to trim the rhizomes yearly. Some of the most desirable bamboos have the shallowest rhizomes and are the easiest to control, Meredith says. In late summer or early winter, a gardener can walk the perimeter of the bamboo area and spade about six inches down. When a rhizome is encountered, it can be cut off and removed, stopping the expansion.

Turtle advises pruning the perimeter rhizomes twice a year or annually if you live north of I-40, the major west-east highway that runs from Barstow, CA to Wilmington, NC. He also suggests digging a trench along the perimeter and filling it with sand to mark the area for future pruning and make it easier to accomplish. Groundcover that doesn’t get more than boot-top high can be mowed to ground.

Another way to control bamboo is to pot it. Meredith notes that the gardener should be aware that the plant’s rapid growth may require frequent repotting so it does not get potbound.

Bamboo Products and Applications
Bamboo is very versatile and has many uses worldwide, as flooring, fencing, woven mats and blinds, or food with tender shoots that can be boiled and eaten.

When used for fencing, people must be careful. Bamboo is very dense, hard, and holds its edge, says Adam Turtle, a bamboo consultant who operates Earth Advocates Research Farm in Summertown, TN. “Work with it, not against it,” he suggests. Splitting bamboo lengthwise takes almost no effort, but widthwise cuts are very difficult.

Use bamboo culms to stake tomatoes and beans. Bamboo leaves, which can contain up to 22% protein, are fed to cattle in some parts of the world.

Bamboo is becoming popular as a flooring material because it is a green or environmentally responsible product. The crop matures quickly, regenerates without having to be replanted, and requires little fertilization or pest control. It can be dried and laminated into solid boards that are then milled into standard strip-flooring profiles. Bamboo wears and ages much like oak and maple flooring.

Advertisement
TAGS:
GARDENING
HOW TO
CARE
More From Bob Vila

5 Ways to Use Bamboo in Your Landscape
Advertisement

Solved! Which Evergreens Grow the Fastest

7 Things to Know When Growing a Wildflower Garden

14 Houseplants That Grow in Water, So You Can Ditch the Dirt

11 Cheap Cures for a Cluttered Kitchen